image American Religion is Not a Matryoshka Doll

As the story goes, individuals are socialized in congregations affiliated with denominations that have distinctive sets of religious practices and beliefs. As Grant and Searcy (forthcoming) argue, “All else being equal, congregations within the same denomination will be more similar to each other than they are to congregations outside the denomination” (italics theirs). Denominations in most surveys return too few adherents to be useful in models, therefore they are aggregated to even larger units – religious traditions. Since we can trace that those Protestant denominations that held to a literalist approach to biblical interpretation remained evangelicals (and kept a focus on conversion, evangelism, and biblicism), while the set that embraced modernism separated off into the Protestant Mainline, researchers often feel comfortable using this scheme to differentiate non-black Protestants into 2 groups. This is the crux of the “reltrad” (short for ‘religious traditions’) measurement scheme for American religion.

In publication after publication, I and various coauthors (Brian Calfano, Jake Neiheisel, Chris Gilbert, Laura Olson, Anand Sokhey, Amanda Friesen, Greg Gwiasda, and others) have taken stock of these assumptions and found them lacking. Ryan Burge and I have continued this work on this blog, finding:

So, how about some productive talk? Sure. Let’s start with some guiding questions. Are religious traditions politically coherent? Do individuals agree with the politics of their congregations? Put differently, should we think of congregations as the cornerstones of groups “united and actuated by some common impulse of passion, or of interest” (Madison in Federalist 10)? Or are they sites where people encounter measures of disagreement and thereby offer opportunities for deliberation? Notably we can’t ask these questions in a reltrad framework; in fact, the answers are assumed as noted above.

In a panel survey conducted last fall during the presidential election season with Anand Sokhey and Amanda Friesen, we asked those who report attending worship services more often than never to estimate the degree of support for Trump in their congregation (0-100 scale). We asked for their own feelings of support toward Trump using a feeling thermometer, as well. Together we can gain a picture of how internally diversified American religion is, but we can only do that once we abandon the assumption that congregations, denominations, and religious traditions are clear, coherent signals and ask other questions, such as these.

The figure below shows the average perceived support of congregations within religious traditions. Not surprisingly Black Protestants are perceived as much less supportive than the other three, among whom Catholics are indistinguishable from Mainline Protestants, who are in turn indistinguishable from Evangelical Protestants. On average, evangelical adherents[1] perceive their congregations as 61% supportive, mainliners as 54 percent supportive, and Catholics 50 percent supportive.

Here is what the data look like for individual evangelicals in their own support for Trump scattered by the perceived congregational support (means are the dashed red lines). We also asked them how confident they were in their perception of the congregation – more confidence earns a darker shaded marker. There are not many congregations near the mean, though it turns out that an evenly divided congregation is the most common single response. There are few who are perceived to be entirely unsupportive of Trump and more who are wholly supportive of Trump, but it is clear that there is enormous variation within evangelicalism. 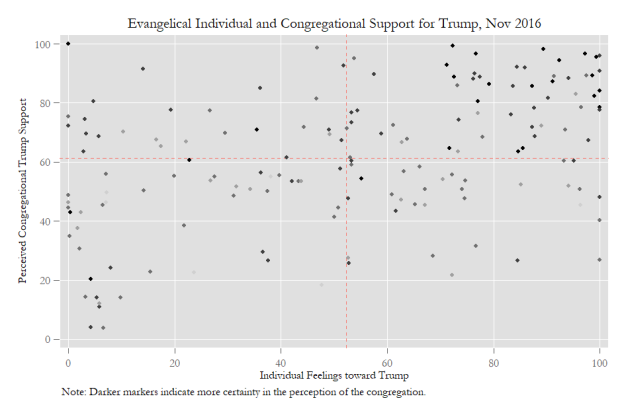 How about Mainliners and Catholics? It may not be surprising to find a similar story. There are congregations all over the map. Some are seen as united for Trump, a good number are split, and some are united against Trump. I’ll show some summary measures of this in a moment. 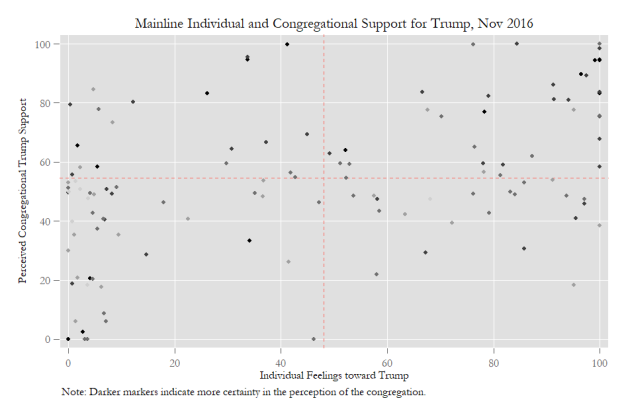 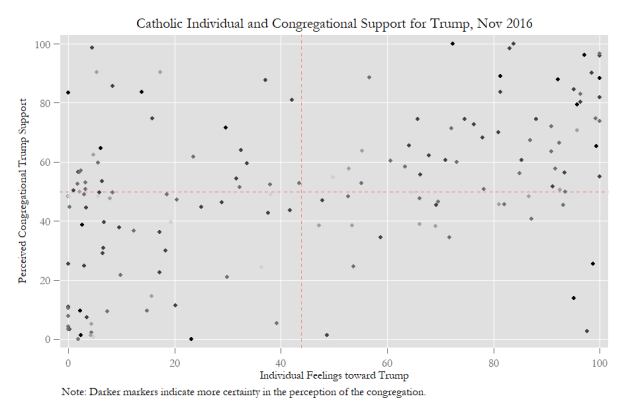 Here are those summary measures of perceived congregational Trump support. The most common responses are that their congregations are evenly divided on Trump, which gives a new meaning to the aggregate statistics presented above for these religious traditions. They are aggregating disunity from their congregations, though there is tremendous diversity in unity about Trump across congregations. 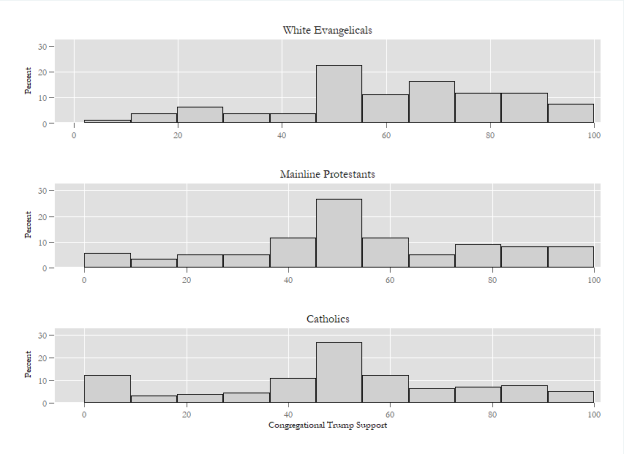 Moreover, it is plain to see that while individual support is linked to perceived support in the congregation, there is a great deal of slippage. That is, many individuals are not members of congregations where they agree with everyone. That can be seen in sharp relief in the following spineplot, which first dichotomizes support for Trump among individuals and congregations. Among those who are warm to Trump, 25% of their congregations are perceived as opposed to Trump. Among those cool to Trump (50% or less on the feeling thermometer – a slim majority of members of these religious traditions), 40% of their congregations are perceived to support him. That does not mean that the modal condition is disagreement, but that the most common descriptor of congregations probably should be ‘diverse.’ 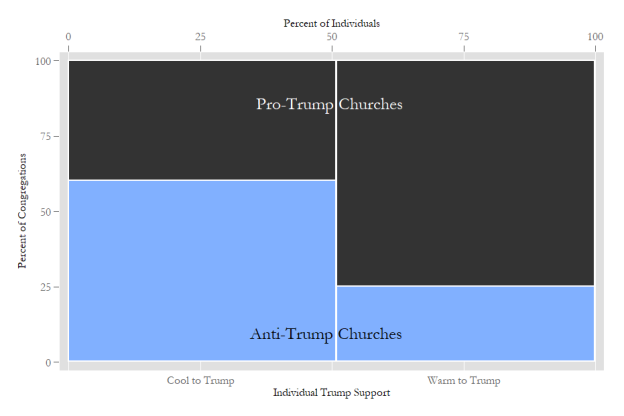 Brian Calfano and I argued in God Talk that we need to capture two things to get a handle on religious influence – exposure and adoption – and you can’t study the latter unless you know the former. Knowing what people are exposed to in congregations is hard, which is why more people have studied candidate characteristics and messages rather than what policy arguments are presented in churches and their effects. Of course, this is the value of experiments since we control exposure and can then study what conditions adoption. But there are models of how to include real measures of exposure out there, some of them are incredibly time and resource intensive (e.g., The Political Influence of Churches) and some of them draw creatively on existing data from clergy, interest groups, and other sources to get a meaningful exposure signal.

More to the point of this post, the reltrad measurement scheme was designed to make assumptions about what people are exposed to. Religion is, from this perspective, in effect a Russian nesting doll (‘matryoshka’), where each level is a smaller replica of the larger unit. This is a clearly not an appropriate image of American religion.

While the progenitors and users of the reltrad scheme might push back and acknowledge that traditions are diverse (in fact, Grant and Searcy say exactly that about evangelicalism in their forthcoming chapter), most users in the literature are looking to reltrad to make claims about the effects of “belonging.” They will, for instance, see insignificant results from tradition dummies and claim “belonging doesn’t matter.”

As we have seen in this and other posts, the group mean of a religious tradition is not a meaningful signal of the people and dynamics aggregated underneath it – reltrads are not an adequate test of exposure to messages in a religious group. We need targeted measures of exposure in religious contexts to put questions first, not measurement schemes.

1. This survey categorizes evangelicals through the “born-again or evangelical” identity (and race), which a prior post suggested returns equivalent results to the denominational classification approach.