What is a Mainline Protestant?

One of the questions that we often get asked when we post analysis of Protestant Christianity is: what is a mainline Protestant? It seems that evangelicalism has become pretty widely known, while mainliners have not gotten the same notoriety. With that in mind, here’s a quick primer on mainline Protestants.

It is commonplace to identify the mainline to consist of members and churches in the American Baptist Church (USA), Disciples of Christ, Episcopal Church USA, Evangelical Lutheran Church in America, Presbyterian Church (USA), Quakers, Reformed Church in America, United Church of Christ, and United Methodist Church. As you will see, there is considerable variation within this group. These religious bodies are also associated with the National Council of Churches of Christ in the USA (abbreviated NCC), though the NCC’s membership extends well past these mainline bodies.

Generally speaking, mainline Protestant denominations are the more moderate counterpart to their evangelical cousins. It would never be appropriate to say that American Christianity was united, but over time as denominations formed and schismed, the mainline denominations remained in the more modernist camp. Though the reasons for the splits have varied considerably (see here for the Presbyterian family tree), how the Bible was to be read was a critical and common one. This theological difference is most clearly seen through the lens of biblical literalism. Biblical literalism (the idea that the Bible teaches that the Jonah was really swallowed by a whale, that Jesus came back from the dead in bodily form, and that the world was created in six 24-hour days) is a hallmark of evangelicalism, but is uncommon in mainline churches, which the graph below illustrates. Only 1 in 5 mainline Protestants are literalists, compared to nearly 2 in 3 evangelicals. The difference between the two is most succinctly described in the official position of the United Church of Christ: “We take the Bible seriously…not literally.”

There are other religious differences as well. Evangelicals place a great deal of emphasis on having a “born-again” experience. They believe that each individual needs to make an affirmative and spontaneous commitment to follow Jesus Christ and come forward during the invitational portion of a church service to make that commitment known. (Think Billy Graham revival). This affirms the idea of adult baptism and rejects infant baptism since infants cannot make an affirmative choice. On the other hand, many mainline churches use a confirmation process, whereby every young person in the church who is of a certain age goes through a series of informational classes and then decides whether they want to join the church. Eventually, that group of students is confirmed membership into the church body. There are other differences, too. For instance most mainline denominations ordain women, while evangelical churches (by and large) do not.

One would assume that the theological liberalism of mainliners would also translate into this group being more likely to support Democrats. The reality is much more complicated than that. The graph below shows the mean partisanship of both evangelical and mainline Protestants from 1972 to 2016. In the 1970’s, mainline Protestants were noticeably more Republican than evangelical Christians. The reason for this has more to do with evangelicals than mainliners. The primary reason is that the “Southern Strategy” of the Republican Party was still ongoing and Southern Baptists had not yet experienced the Conservative Takeover of the early 1980s which moved the denomination to the right (both theologically and politically). Notice that across the entire time frame, that mainline Protestants have become less Republican, but only very slightly and are now internally divided. In reality, some mainliners could accurately be described as “Country Club Republicans” a term that denotes individuals with above average incomes that prefer lower taxes, but are generally moderate on social issues. 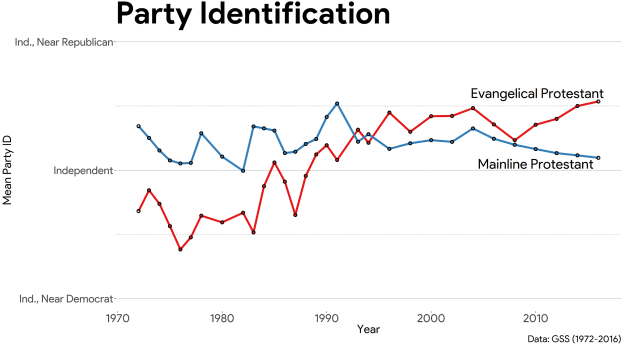 This description moves into sharper focus when considering how evangelicals and mainline Protestants view social issues in the graph below. While there is not a tremendous amount of difference between the two groups in terms of partisanship, a significant gulf opens up when looking at abortion and gay marriage in 2016. Note that for both issues, just over a third of evangelicals are in favor of liberal social policy, while 60% of mainline Protestants are in favor of allowing gay people to get married and women being able to have an abortion if they chose to do so. This may be rooted, at least in part, on their theology. If one believes the Bible to be literally true, passages like “Before I formed you in the womb I knew you” (Jeremiah 1:5) or “Men committed shameful acts with other men, and received in themselves the due penalty for their error.” (Romans 1:27), can have a tremendous impact on one’s political orientation. On the other hand, many mainliners will say that those passages must be read in the context of when they were written and can be interpreted in many different ways. 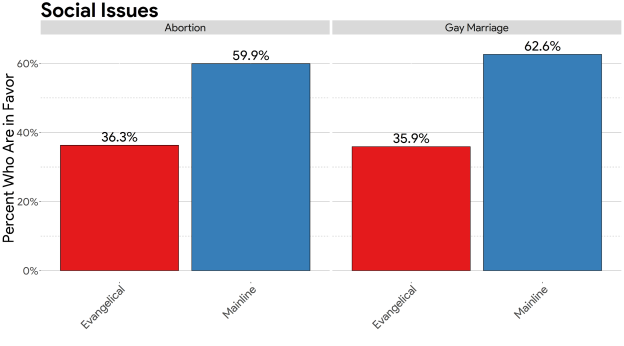 The Future of Mainline Protestants

The elephant in the room for mainline Protestants, however, is that their share of the American population has seen an unprecedented decline in the last 40 years. For instance, in the mid 1970’s, 3 in 10 Americans identified as mainline. In fact, they were the largest religious group in the United States. Today, only one in ten Americans identify as mainline. This drop in adherents is surely linked to the rise in the religious nones. While just 5% of respondents in 1972 said they had no faith, today it’s closer to 22%. In 2017, Ed Stetzer wrote that if the current trend continues, mainline Protestants will disappear in 23 years. At the very least, the future of these denominations is not a rosy one.

This speaks to a larger trend occurring in American religion: moderates are disappearing. Work by Landon Schnabel and Sean Bock finds that the share of the population that is intensely religious (meaning frequent church attendance, prayer, and a literal view of the Bible) has not declined, while many moderate individuals have stopped identifying with religion entirely. Mainline Protestantism is ground zero for this phenomenon. It’s impossible to know if mainline traditions can reverse this trend, but it seems likely that fewer and fewer young Americans are aware that evangelical Christianity is not the only flavor of Protestantism in the United States.

Indeed, one of the conventional stories about the mainline is that they became generals without armies, with denominational elites taking political stances on civil rights and against the Vietnam War that were far too liberal for the membership. “Storms in the Churches” were the result, leading to the loss of members and donations. The downward trend seen above has been linked to the political activism of the mainline.

The distribution of partisanship among mainline affiliates belies this story, however. Partisanship was strongly “bimodal” (two peaks) in the 1970s and has since steadily flattened out. As the average in the graph above shows, the pews have not emptied of conservatives, but really of both strong Democrats and Republicans about equally. One reason: mainline affiliates are less likely to report hearing their clergy speak out on political issues. If political engagement drives out the apolitical, then the lack of political engagement across these denominations would make for a happy home for political independents.

The decline of the mainline may have lasting impacts on civil society since these denominations are heavily invested in health care provision (e.g., Riverside Methodist Hospital) and education (Gustavus Adolphus College is affiliated with the ELCA), as well as community food pantries, shelters, and other social welfare work. They also were leading voices from the religious community lobbying government; that voice has constricted considerably as the membership has declined.

Hofrenning, Daniel J. B. 1995. In Washington But Not Of It: The Prophetic Politics of Religious Lobbyists. Philadelphia: Temple University Press.