It was once conventional wisdom that the Christian Right emerged from cultural conflict over abortion and, more broadly, the sexual politics of the 1960s. It seems plausible on its face – the Christian Right appeared (organizationally) in the late 1970s on the heels of Roe v. Wade (1973); at least dawdling on the heels of Roe. But there’s been a sea change in the conventional wisdom recently with a growing amount of empirical backing. After Randall Balmer’s widely noticed piece in Politico, additional scholars have verified that the Christian Right had much tighter ties to the politics of race. That is, white evangelicals in the South were motivated to organize to defend their segregation academies from federal intervention. These were schools founded to protest the racial integration of public schools and a vast wave of private schools across the South attest to how widespread this preference was.

Does that preference remain?

This investigation was inspired by, what else? Twitter. Just the other day, Steven White was talking about the power of institutions to weaken racial resentment, spurred by new research that finds joining a union does just that. Then the professor with many twitter names (is it Big Rome, Hoosier Blues Man, or Ryan LeCount?) put out “the bat signal” and that’s hard to resist.

Someone should study (if they haven't already) what other kinds of institutions can reduce racial resentment among white Republicans specifically. My guess is churches, but probably some denominations and not others.

The institution I sought to check out was, naturally, religion. I singled out evangelicalism, not because I thought it would attenuate racial tensions, but because it would likely exacerbate them. Fortunately, the Voter Study Group has a remarkable panel available for public analysis. Starting with a “baseline” survey in 2011, the VSG followed up with panelists in 2016, 2017, and 2018. Of course, not all questions are asked in each wave, but we have available two time points for several pertinent variables about racial attitudes. Most important, we have religious variables available at each time point. Burge has taken advantage of this tremendous opportunity for prior work on religious switching. For this post, I draw on the circumstance that some people have adopted and dropped a born again/evangelical identification at various points.

The VSG uses standard items to capture modern racism, reflecting the reality that up until at least a few years ago it was rare for people to come right out and admit racial prejudice. Of course that has changed, but we have a legacy of items used consistently over a long period so we can track changes. In each case below, I am measuring the difference from one point to the next. The numbers are small, capturing the average change of, for instance, those not born again at an earlier time point to become born again/evangelical at a future time point. Let’s get after it.

Consistent with the new conventional wisdom, those who adopted a born again/evangelical identification after 2016 lost concern for racial equality. Technically, their concern level overlaps with zero, so we cannot say it changed, but it is distinguishable from their brethren who were also not born again in 2016 and whose racial concern grew by the 2017 survey wave. Interestingly, consistent evangelical identifiers also experienced a growth in racial concern – the same level of growth as the non-evangelicals. Actually, everyone experienced growth in racial concern except for those who converted.

That same basic pattern repeats with other measures, shown below, that cover a different time period. These start at the baseline survey in 2011 and then catch up with the panelists in 2016. The whole sample experienced some growing agreement that blacks have gotten less than they deserve from 2011 to 2016 (“the Great Awokening”), but evangelicals experienced lower growth than non-evangelicals. Again, only post-2011 evangelical converts lagged, experiencing growth that is indistinguishable from zero. And those who deconverted from evangelicalism experienced the most growth in agreement.

The question used on the right read: “Irish, Italian, Jewish and many other minorities overcame prejudice and worked their way up. Blacks should do the same without any special favors.” Non-evangelicals displayed the most growth in disagreement with that statement, with the deconverted experiencing the most growth (though not statistically distinguishable from the consistent non-evangelicals). On the other hand, evangelical converts are headed in the other direction, showing some growing agreement (though not distinguishable from zero). Both groups of evangelicals show stasis in this attitude and, of course, they are much more likely to agree with it to begin with. 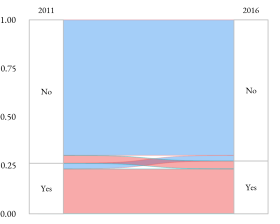 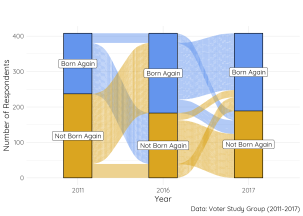 Why does this matter? The most obvious conclusion keys in on the observation Martin Luther King Jr amplified that Sunday morning at 11am is the most segregated hour in America. Americans simply do not attend church much with people of other races. Religion is not helping and may even be exacerbating racial sorting in the US. White evangelicals in particular have long had problems with race, which partly is rooted in their Southern locale. The Southern Baptist Convention only apologized for supporting slavery in 1996. But that’s not all of it. Now it’s political.

White evangelicals and blacks are on opposite sides of a very deep political divide in the US that is linked to partisan identity as well as ideology. White evangelicals tend to adopt an individualist ideology that right thinking and believing is sufficient to live a good life full of health and wealth (at least in the prosperity gospel version, which is quite widespread at this point – more on that soon). Blacks and Democrats and others are on the opposite side, rejecting much of the individualist worldview and highlighting the problems created for people by problematic institutions. From this perspective, it is easy to see that evangelicals are not budging much on measures of racial concern. But it clearly is not just ideological, since evangelicals have latched on so tightly to the Trump agenda, expressing views that the coming racial diversity will be mostly negative, as PRRI reports from their polling.

This evidence also bears on that growing debate about the origins of the Christian Right that is quickly sweeping academia to create a new conventional wisdom discussed in the introduction. Again, that account showcases how the politics of race drove concerned white evangelicals to ramp up their advocacy to protect their segregation academies and segregated universities in the late 1960s and early 1970s. Forty years later, we are finding evidence that the white evangelical subculture is still behind on race and is pulling others to adopt the same viewpoints.