Which Party Has Become More Polarized on Abortion?

I have written about abortion more than I wanted to, but it’s all over the news in the last month. Conservative states like Alabama, Missouri, and Georgia passed bills that made abortion almost entirely illegal after six to eight weeks gestation, which is clearly a direct test of Roe v. Wade. Then presidential candidate Joe Biden can’t get out of his own way on the issue. First he proclaimed that he was in favor of the Hyde Amendment, which bans of the use of federal funds to support abortion services. After he heard the opinions of many inside the Democratic Party he reversed himself and now does not support the Hyde Amendment.

A few tweets this week got me thinking. One from O. Alan Noble, an evangelical who has serious reservations about Donald Trump

The fact that no Democrat presidential candidate is even willing to try to *nominally* undermine Trump’s leverage with evangelicals by supporting the Hyde Amendment is pathetic and damning. https://t.co/pbf6QgEh37

And then this one that quotes Beto O’Rourke and his belief that the Democrats could never nominate a pro-life candidate:

Stephanopoulos: "Is there any room in the Democratic Party now for those who oppose abortion?"

Beto: "It is very hard for me to believe that we could ever produce a nominee who would not believe in a woman’s right to choose." https://t.co/xytPjKJe96 pic.twitter.com/ohUcRjufL6

So, what in the world is going on here? Are Democrats becoming increasingly fringey on abortion? Or are Republicans really the problem here? The crux of the issue is: what are extreme views on abortion? I don’t think that there’s a clear empirical answer to the question. Here’s my approach – how much have opinions of the two major parties shifted on abortion after the Roe decision? The further they have moved from the 1977 GSS baseline, the more polarized they have become.

Here’s the broadest GSS question: Please tell me whether or not you think it should be possible for a pregnant woman to obtain a legal abortion if the woman wants it for any reason? The options were, yes and no. I eliminated all the don’t know and no answer responses for simplicity. The above graph is the share of each of the two major parties who supported abortion in this scenario with 95% confidence intervals indicated by the shaded areas. From this angle we can see that abortion opinion between the two parties was nearly identical even until the late 1980’s.

However, at that point we see two things happening. First, Republicans did move slightly away from abortion rights. Instead of average support being in the upper 30’s, it dropped to the low 30’s and has basically stayed there since. This is undoubtedly due in no small part to the Religious Right’s laser like focus on abortion policy in the early 1990’s. Secondly, Democrats began moving strongly in favor of abortion access. It happened in two stages. From the late 1980’s to the early 2000’s about ten percent of Democrats became more supportive. Then from the mid-2000’s to the mid-2010’s we can see that opinion shifted nearly fifteen points toward abortion rights. Now, nearly ⅔ of Democrats think that a woman should have the right to an abortion for any reason. It seems that we can say that both parties have moved away from each other, but the Democrats have shifted much more than the Republicans.

However, the story is much more complicated than that. While the “abortion for any reason” question is a probably the best approach if you only use one question, the GSS offers up six other scenarios that provide a great deal of nuance. Here they are:

The graph below is the exact same analysis as the first graph, but for each of these six questions. The Democrats are in blue and the Republicans are in red. The results are a lot more complicated. 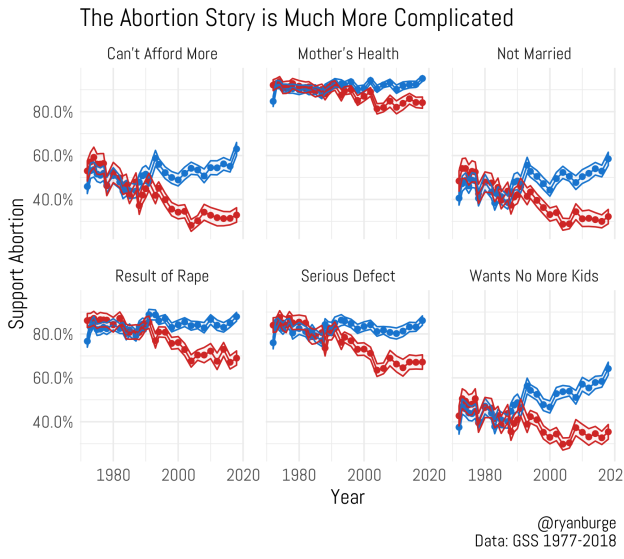 It seems that we can divide these scenarios in two broad categories: rape, mother’s health, and serious defect form one group, with “can’t afford more children”, “not married”, and “wants no more children” as the other category. The distinction is crucial here, because the polarization looks completely different based on these categories.

The first category: rape, mother’s health, and serious defect, sees broad support from both parties. However, you can clearly see that Democrats have not budged in supporting abortion in these circumstances, while Republicans have become less supportive. For instance 87.1% of Republicans favored allowing abortion in the case of serious birth defect in 1977 but today it’s ~67.2%, with a similar pattern in the case of rape. At the same time, the Democrats have seemed fairly consistent in their support for these cases.

On the other hand, the other three scenarios see something else entirely. For instance, the top left panel is this scenario: If the family has a very low income and cannot afford any more children. Note that the level of support between the two parties was nearly identical in 1990, then the Democrats became more supportive while the Republican moved in the opposite direction. This same thing can be found in the “not married to the father” and “wants no more children” situations. 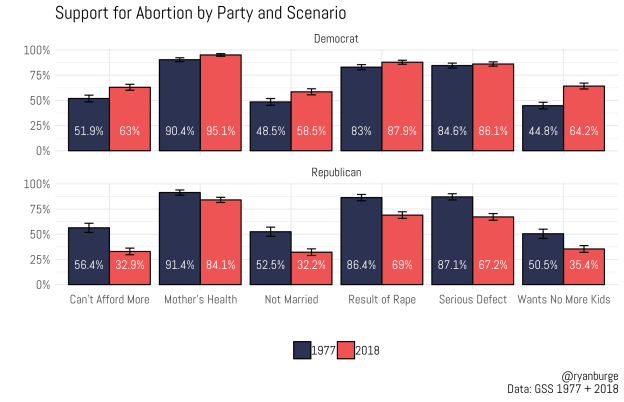 Speaking broadly, it appears that Democrats have maintained their support of abortion in cases like birth defects and rape, while increasing support in the “can’t afford more” and “not married to the father” cases. While the Republicans have seen support drop in basically every situation. If we were to assign blame regarding polarization on abortion it belongs to both parties. Two thirds of Democrats believe a woman should be able to have an abortion if she doesn’t want more children, when it used to be 45%. However, on the other hand, three in ten Republicans today believe that a woman has no right to an abortion if she was raped, when it used to be less than 15%.

To pontificate a little it seems that both parties have been altered by different philosophical views. Democrats have been swayed by theories of oppression rooted in patriarchy and income inequality. Many Republicans have seen their views shaped by the idea of personal responsibility and that life begins at conception. It’s like these two groups have become “woke” in completely different ways. I have no reason to believe that a moderate (read: pro-life) Democrat, or even a moderate (read: pro-choice) Republican, can survive a presidential primary in these fractured times.