Religion has long been examined for its effects on political engagement, with decidedly mixed results. While many writers—going back to Alexis de Tocqueville—argue that religion promotes civic engagement, others assert that in many circumstances, religion may lead to political disengagement, distrust, and cynicism. Of the many ways that religion can affect an individual’s political abilities and activities, political knowledge is both a vital and understudied component. In a paper recently published at Politics and Religion, I argue that while religion will, in some instances, increase political awareness, distrust in the mass media will lead to lower levels of learning about current policy topics.

Last year, Ryan Burge wrote an insightful post assessing whether religion affects political knowledge. He notes that despite the extensive literature on political knowledge, religion has rarely been front and center in explaining such knowledge, and that such explorations are long overdue. To address this, he used the 2016 CCES to examine the effect of religious denomination, age, partisanship, and religious attendance on five knowledge questions, finding significant variation between denominations and a small negative relationship between religious attendance and knowledge overall.

Burge does a fine job of analyzing this data, and it is a nice addition to the (rather short) list of comprehensive efforts to gauge the empirical relationship between religion and political knowledge. However, it is apparent that this relationship is highly dependent on which knowledge questions are asked and which religion variables are assessed. Indeed, the extant studies of religion and political knowledge tend to combine into a single metric whatever knowledge questions are readily available, with contradictory results and little analysis of the causal mechanisms. Focusing on how different religious traditions fare in knowing which political party is in power (as Burge does in his post) will lead to one set of findings, but what happens when you dive deeper?

First, political knowledge is itself a multi-faceted concept. As Barabas et al. (2014) show, political topics can vary along a temporal dimension (static v. surveillance)—reflecting whena fact was established—and a topical dimension, meaning whether a question deals with general political facts (e.g. who the Secretary of State is), or if the fact deals with policy topics. The ability and motivation to learn each of these four types of facts (static-general, static-policy, surveillance-general, and surveillance-policy) will differ along demographic and attitudinal lines (though as Burge notes for Delli Carpini and Keeter [1996], Barabas et al. also do not include religion in their analysis).

Second, how we conceptualize and measure religion is complicated and can be highly contentious, especially when attempting to broadly capture how religion affects political attitudes and behaviors. There are more than a few entries on this very blog that engage in this debate. In my analysis, while I begin by assessing the effects of a variety of religious inputs on the four types of political knowledge, for mostly practical reasons I ultimately settle on two main measures of religiosity: attendance at religious services and Evangelical identification.

So why should religion affect political knowledge, above and beyond other demographic factors such as education? As a large literature describes, religion can be a key avenue through which individuals become part of discussion/recruitment networks, become mobilized, and acquire various civic skills—including political awareness (e.g. Verba et al. 1995). On the other hand, others argue that religion may lead to a retrenchment from the secular world, distrust of the news media, and disengagement from heterogeneous sources of political information (including non-religious personal networks).

I argue that religion has a complex effect on acquiring political knowledge, depending primarily on whether a piece of information requires engagement with a (mostly) secular media environment to learn, and whether the religious factor is likely to inhibit or promote trust in that media environment. That is, I do not believe that religion would affect political knowledge because religious individuals have higher/lower intelligence, different recall abilities, or more/less access to information. Religious involvement may increase many types of political engagement, which could lead to higher levels of knowledge, especially general political facts. However, the dogmatic factors associated with religious adherence and activity—particularly of the Evangelical variety—will make people more suspicious and distrustful of secular news media, causing individuals to be less apt to learn facts about breaking policy-based news. Overall, then, if my argument is correct, greater religious attendance and Evangelical identification will be associated with diminished political learning for surveillance-policy information, while having little to no effect on the other types of political knowledge.

I first used the ANES surveys from 2012 and 2016 to assess the relationship between the religious variables and all available political knowledge questions and found good reason for the contradictory findings of previous researchers. For instance, religious attendance was sometimes positive and significant, but other times insignificant, in explaining levels of political knowledge when controlling for demographics and denominational affiliation, depending on the survey wave and type of knowledge question. Biblical literalism, on the other hand, was consistently associated with lower levels of all types of knowledge. Other religion variables were a mixed bag. It is easy to see how the choice of knowledge question and religious variable could lead to a variety of outcomes.

Unfortunately, while they have a relatively extensive battery of religion questions, large national surveys such as the ANES and the CCES only ask a limited set of knowledge questions (for instance, the ANES includes just nine, most of which ask about general political facts). As a result, making firm conclusions from these surveys is a bit daunting—especially when separating out the four different types of political knowledge.

In order to complement this “big survey” approach, I needed to increase the number and variation of knowledge questions. To do this, I created a data set of 19 polls with at least one political knowledge question and at least one measure of respondent religion. Overall, I was able to analyze 86 knowledge questions: 25 static-general, 12 surveillance-general, 17 static-policy, and 32 surveillance-policy. Next, I coded nine different media outlets—both print and television—for articles/transcripts containing the correct answer to each of these 86 questions in the six weeks leading up to the time the survey was put into the field. In this way, I can approximate how much opportunity people had to learn facts from the media before answering each question. Unfortunately, these smaller surveys included far fewer religion variables, so I was only able to examine the effect of religious attendance and Evangelical identification.

First, I needed to determine whether religion does in fact increase distrust in the mainstream media. In Figure 1, I report the effects of attendance and Evangelical ID—controlling for demographics—on perceiving the media to be hostile to the respondent’s values and unfriendly to religion. As the figure shows, frequent attenders are 20% to 30% more likely to see the media as hostile and unfriendly. Evangelicals are also significantly more likely to see the media in a negative light. 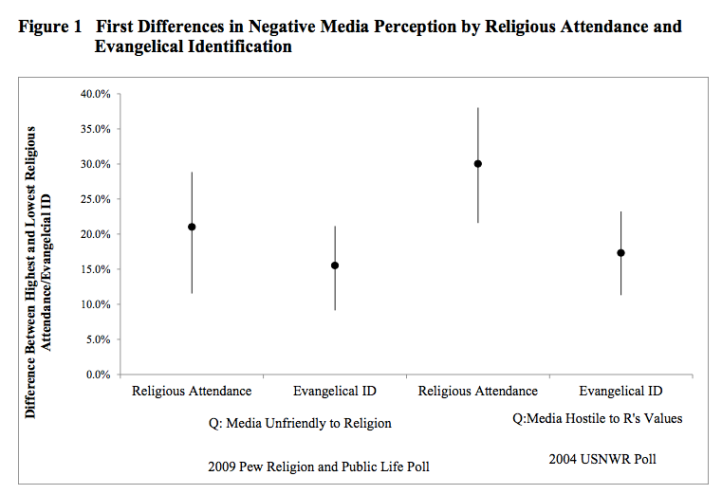 So how do these perceptions affect how people learn political information? Controlling for media coverage, religious attendance had no significant effects on knowledge for three of the four types of information, and actually increased surveillance-general knowledge. However, I’m more interested in political learning than in overall levels of political knowledge. That is, given the opportunity to learn about politics (measured by how many news stories provide the correct answer to a political question), do religious individuals learn at higher or lower rates than less-religious respondents? I expect that due to greater distrust in the news media, religious individuals will be less apt to learn about fluid and contentious information from the mass media, specifically surveillance-policy facts.

This is exactly what I find. As Figure 2 shows, those who neverattend religious services learn surveillance-policy information from the media in a linear fashion: the more the media covers a policy topic the more likely these individuals are to get a relevant question correct. For frequent attenders, on the other hand, the relationship between media coverage and political learning isn’t just weaker, it goes in the opposite direction! On surveillance-policy topics that receive below-average media coverage, frequent attenders are if anything more informed than low attenders. However, as the media covers a topic more extensively, highly-religious respondents actually appear to become lessinformed, leading to a significant knowledge gap. Secular respondents are nearly twice as likely on average to get a policy question correct compared to highly-religious respondents at the highest levels of media coverage. 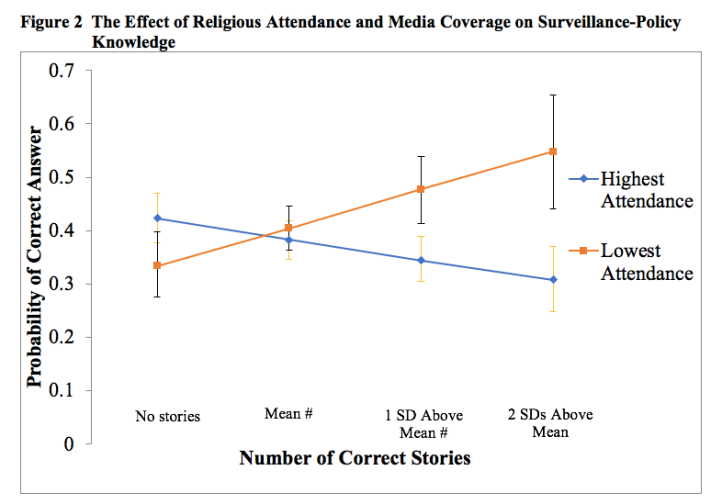 As Delli Carpini and Keeter (1996) famously state, political knowledge is the “currency of citizenship.” The ability and willingness to learn from the mass media is a prerequisite to becoming informed on the issues of the day, but in our current environment, distrust and disillusionment with the mainstream media is distressingly high. As a result, people are increasingly getting their information elsewhere, often from quite dubious sources. In an era where politicians cry “Fake News!” about stories they do not like, people who already view the media as hostile and unfriendly will be particularly susceptible to resisting the conclusions and interpretations of distrusted media figures, and perhaps even rejecting factual information from these sources altogether.

This certainly seems to be happening for those who attend religious services regularly and call themselves Evangelical. If anything, the religious divide on public policy knowledge is likely to get stronger as religious Americans continue to move toward the Republican Party and trust in the mainstream media becomes more partisan. As a result, I expect religious individuals, even those who may be highly aware of basic political facts, to exhibit substantially lower levels of knowledge for widely-covered policy issues from the “liberal” media. While this growing knowledge gap is due more to trustin the source rather than differences in exposure to information, it is also likely that religious Americans will become more siloed into informational echo-chambers that better reflect their own beliefs.

Troublingly, as Gilens (2001) shows, lacking policy knowledge can have a highly distorting effect on political preferences. For example, when the media breathlessly fact checks policy appeals made by President Trump, religious viewers will be more likely to resist correction because they distrust the messenger. In the end, religious and secular Americans may not only inhabit separate moral universes but may also disagree on fundamental political facts.