As the Democratic nomination contest heats up as we head into winter, there is considerable talk about candidate electability, and not just about women candidates. Democratic Representative Jim Clyburn told CNN that Mayor Pete was going to face headwinds in South Carolina, where black people make up 60% of the Democratic electorate and have a “generational issue” with LGBT people. The backlash was immediate. For one, candidate Kamala Harris “called the narrative ‘a trope’ that was ‘just nonsense,’ and said that the trope has developed ‘among some Democrats’ to suggest African Americans are homophobic and transphobic” according to a Politico story. And Rev. William Barber, a prophetic voice of the Christian left, put out this tweet:

I have deep respect for @WhipClyburn, but I strongly disagree that black ppl have a generational problem w/ gay ppl like @PeteButtigieg. Have we forgotten all the gay people who’ve been a part of the fight for liberation, from Langston Hughes to James Baldwin to Bayard Rustin?

This discussion could clearly use some data, which I have in spades. Just how do different racial groups feel about groups that are core to the Democratic Party? I’m using data I collected with Anand Sokhey and Amanda Friesen in 2016 that we gathered through Qualtrics Panels. Though that feels like forever ago, I checked and the results look almost identical to a smaller sample I have from 2018. Let’s get to it.

The survey asked, “We’d like to get your feelings towards some groups and figures in society. Please use the following rating scale to indicate how warm or cold you feel towards each of them. 100 indicates that you feel very warm towards that group/person, and 0 that you feel very cold towards that group/person.” I broke out the results by party and race, especially because this current debate is being held within the Democratic Party’s ranks.

White and Hispanic Democrats express warmer feelings toward ‘homosexuals’ (the survey language), while Black and Asian Democrats feel less warm. Black Democrat scores are 12 points lower than the scores from white Democrats. Black Democrats are also indistinguishable from Black independents, though both express more warmth than Black Republicans, who show the least warmth toward gay and lesbian Americans of any group in this analysis (though their very small numbers impede significance testing). Meanwhile, whites and Hispanics show the predictable pattern of declining warmth toward this liberal group by partisanship.

Let’s expand the inquiry to another group that is politically salient on the Democratic side: atheists. The non-religious have become a huge constituency in quite a short time period and have become a key component of the Democratic coalition in part because of the Christian nationalism of the Republican Party. Obviously, religious nones are NOT equivalent to atheists, not by a long shot. But, some people equate them and atheists are very heavily Democratic. How do the same groups feel about this heavily Democratic group? In the figure below, the scores are much lower than they were for gays and lesbians – Americans don’t much like atheists. Only Asian Democrats get above the midpoint (at 54), though white Democrats come close (at 49). Blacks are notably lower than other racial groups, if not always significantly so. They really stand out among Democrats, but are on the low side in each partisan group. Across partisanship, Blacks’ feelings toward atheists are statistically indistinguishable and low. 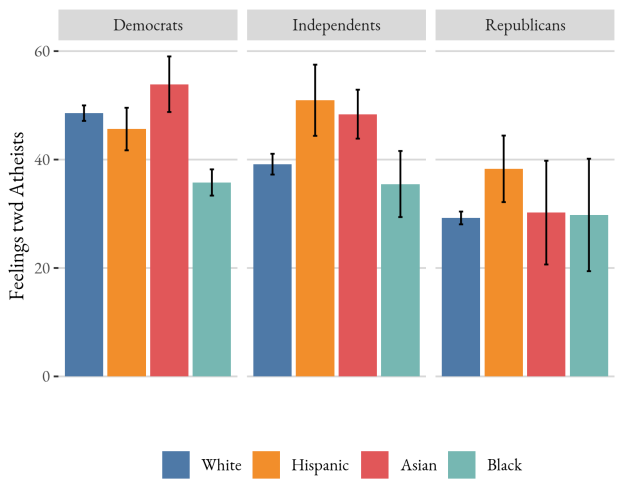 Let’s flip it around and look at feelings toward a group typically considered to be conservative – ‘Christian fundamentalists’. Here, in the figure below, we can see that whites and Hispanics show what the conventional wisdom might expect. Democrats feel somewhat cool toward them and Republicans feel somewhat warm toward them. Blacks, however, show their own pattern: both Democrats and Republicans feel warmly toward Christian fundamentalists and more so than any other group. It turns out that this helps us figure out the pattern among racial groups and something about Black politics more broadly.

Why are Blacks’ views about these important groups so distinctive? For once, we can’t rely on partisanship because Blacks are overwhelmingly Democrats and still have cool views toward these Democratic groups (gays and lesbians and atheists). Instead, the simplest explanation is that Blacks are more religious than other Americans – they attend church at higher rates and identify with some kind of religious group at higher rates than other racial groups (in these and other data). That’s why social science has created a religious category that includes just Black Protestants. Of course not all religious groups are antagonistic toward LGBT Americans, but the association of negative feelings and religiosity is reasonably strong.

Is it changing? Rev. Barber made the claim that there is no generational divide in the Black community, which, no, just no. That’s not right. But in order to have a proper conniption fit, we need data and it turns out that the pattern is interesting. It is undeniably true that positive feelings toward gay and lesbian Americans are growing, which would confirm a severe generational divide, but it has only appeared among Black women. There is a huge, 40 point spread between 18 year old and 88 year old women. However, old and young Black men are no different – the spread is 7 points, which is an increase, but not a statistically significant one.

Political parties are complex organizations with many groups there for their own reasons and not because they like other identifiers. That’s clear in the case of Black Americans, who are quite likely to be Democrats but do not express considerable love for many of their co-partisans. For one, this points out the weakness of the ingroup/outgroup model of partisanship – these identities are surely heavily skewed by group perceptions of what a Democrat or Republican looks like (for instance, check this out for results about perceptions of the religious composition of the parties).

For two, in this case, Mayor Pete appears to have a heavy lift in front of him to convince Black voters to support him. Polls already indicate very weak support for him among African-Americans, though I would not want to chalk that up solely to prejudice since there are arguments available about how his mayoralty has affected the Black community. But it would also be a mistake to dismiss these patterns as a trope. The gaps are real and can affect how the Democratic Party’s candidates may fare.

Paul A. Djupe, Denison University, is an affiliated scholar with PRRI, the series editor of Religious Engagement in Democratic Politics (Temple), and co-creator of religioninpublic.blog. Further information about his work can be found at his website and on Twitter.