So, Why is Evangelicalism Not Declining? Because Non-Attenders Are Taking On the Label

I’ve been thinking and writing quite a bit this week about the term evangelical and all the baggage that is associated with that term now. The online conversation seems to circle around loud voices declaring their repulsion to the term and how they have walked away from not only evangelical forms of Christianity but in many cases, religion entirely.

But, there’s an alternative narrative that I don’t hear many people talking about: The people who feel drawn to evangelicalism because of what that term has become in the Trump era. This follows what I wrote earlier this week – the share of Americans who self identify as born-again or evangelical is clearly NOT in decline over the last decade.

That means for every person that was lost, another was gained. Well, I have been thinking about the implications of that. Specifically, are self identified evangelicals in 2019 different than the 2008 version of the same group? I think the data says the answer is yes.

A broad look at partisanship first. 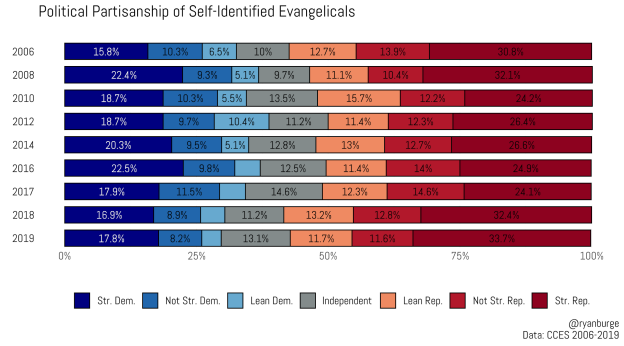 But, maybe that’s just some weird artifact in the data. I wanted to cross check with political ideology. And, it’s even stronger on this measure.

Remember, the share of Americans who identify as evangelical is unchanged in the last decade, so how are we seeing this really significant change in the political composition of evangelicalism? I think I’ve found the answer.

I put together a model that predicted how likely an individual was to identify as a political conservative. I broke the sample down into evangelical/non-evangelical and included the typical demographic controls.

There’s not much to report on the right panel among those who said that they were not evangelical. The more someone attends church the more likely they are to identify as conservative. That relationship hasn’t shifted since 2008.

But, the left panel is where the story emerges. Notice that for 2008, 2012, and 2016 low attending evangelicals all start in basically the same spot – 35-40% conservative. But look at the solid pink line representing the data from 2019. Nearly half of self-identified evangelicals who never go to church identified as conservative (a jump of basically ten points).

Look at the pitch of the line. It’s fairly flat, which means that church attendance matters less for predicting evangelical political conservatism now than it did in prior years. In fact, the most religiously devout evangelical in 2019 is a bit less likely to be conservative than a devout evangelical from 2008.

In 2008, 35% of never attending evangelicals were conservative, while 72% of those attending more than once a week identified as conservative – a jump of 37 percentage points.

Church attendance matters a lot less now for predicting political ideology than it did just twelve years ago.

But, the composition of self-identified evangelical conservatives is also shifting. In 2008, 10.6% of politically conservative evangelicals attended church seldom or never. In 2019, that had more than doubled to 21.3%. Just a decade ago, one in five attended yearly or less – and now it’s over a third.

So, yes, evangelical identification is as robust now as it was ten years ago. But it’s a lot less devout. The fusion of evangelicalism and Republicanism has buoyed the religious tradition, while also making it less religious at the same time.