By Paul A. Djupe, Denison University

Just after the anniversary of the Insurrection at the Capitol, the Justice Department announced the formation of a new domestic terrorism unit to help combat the rise of right-wing extremism in the US. Though extremism has not typically been asked in American opinion surveys, that has changed since the Insurrection as well. For instance, PRRI reported in November 2021 that 18 percent of Americans believed that “Because things have gotten so far off track, true American patriots may have to resort to violence in order to save our country.” That number was much higher among Republicans, especially those who trust Fox News or other far-right outlets. Moreover, these numbers appear to be climbing from early in 2021.

I suspect that these trends can be linked to two particular forms of religion, one we know well and one we know little about (quantitatively at least). Trump’s grievance politics have been long attached to the Christian nationalist cause  –  to take back America for Christians, restoring their perceived rightful place as the decision-makers (this is the one we know well). Christian nationalist attitudes about society and politics have closely matched Trump’s politics about police, race, immigration, guns, COVID, and other matters as Whitehead and Perry and others have documented. But that worldview has also been attached to approval of violence in a new paper out at Political Behavior by Armaly, Buckley, and Enders.

What I think is missing is the particular style of religion that is attached to the more virulent strain of Christian nationalism: those who believe in prophecy. Prophecy beliefs entail that God’s power and thoughts are channeled through human beings to, for instance, tell the future and heal people. Prophetic religion enables at least two things: absolute certainty and completely flattened organizational structures  –  anyone can lead. Take Clay Clark, a businessman now co-headlining the ReAwaken America tour with Michael Flynn, who revealed to Charisma News that “God is using [the tour] to wake up the world” (which you can watch for $17.76). The connections to various new and old prophets and prophecies run deep, but critically meant to Clark that he knew “exactly, 100% of God-ordained clarity, what I was supposed to do.” That level of certainty combined with a mission to take back America from the  “demonic forces” pushing Trump’s impeachment who would strip Christians of their religious freedom if they regained control of the federal government, makes it clear that extreme measures would not be off the table.

I wrote about our measures of prophecy support in a previous post with Jason Adkins and Jake Neiheisel, with whom I gathered the data in March 2021. There we argued that, “If you want to understand religious politics on the right in 2021, you need to understand the role of prophecy.” We found that a majority of Americans believe God is in control of events on Earth, about 40 percent believe that God has given the power to heal by the laying on of hands, and that God reveals his plans to humans through prophecy. The one question that did not receive tremendous support (only 19% agreed) was: “God told prophets that Trump would win the election.” Still, belief in prophetic religion is very high  –  the mean for the scale of four items is .55 (range is 0-1) for religious Americans. And they are not just pentecostals or limited to evangelicals  –  there is widespread belief in prophecy across religious traditions.

The belief that the authority of God was on their side dictating history would be a powerful force, but would stop at democracy’s edge, right? In March 2021, we asked about prophecy belief, Christian nationalism (the same scale as Whitehead and Perry), and a set of new items designed to tap support for groups engaged in extreme actions. Our measures differ from others because they are specifically about an ingroup organization that “supports my group’s rights.” Both taking back the country and fighting back against perceived persecution have been the dominant narratives on the right to promote their political activism. Perhaps not surprisingly, support for the hypothetical extreme group we asked about (see below) is just about as high (mid 20s for one item) as the taking back by force item others have used. And about 36 percent answered yes on at least one of these items. (We also asked the items others have used about group extremism and violence and they’re correlated in the .3-.4 range with this index). 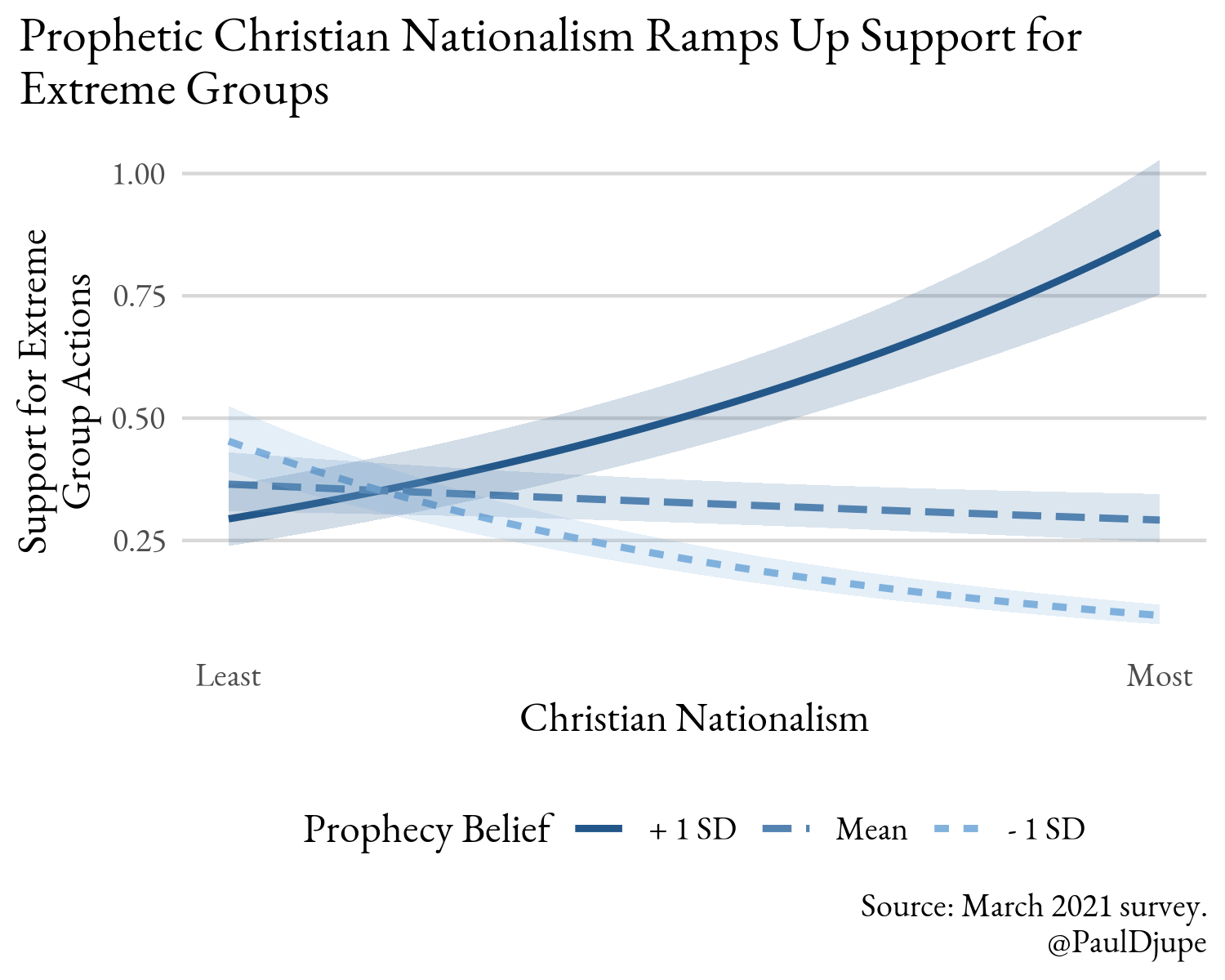 When I was on Dwight Moody’s podcast The Meetinghouse last week talking about religion and the Insurrection, he asked me whether we were actually talking about white conservative Christians. I think he was surprised when I hemmed and hawed, but here’s why I did not immediately embrace that distinction: prophetic Christian nationalism promotes the same level of extreme group support almost no matter the racial/ethnic group. The relationship is much more subdued among Asian-Americans, but is robust among Blacks, Latinos, and whites. Prophetic religion appears to unite Americans around a willingness to engage in extreme acts to protect their group. (These results come from a negative binomial regression model with demographic controls).

While this could be a both sides sort of thing, let’s not fool ourselves – these dynamics are linked to the Insurrection. The survey asked if “I believe the people who stormed the Capitol Building were patriots trying to reclaim the “People’s House.”” The results, shown below, clearly are less decisive than the previous results because all Christian nationalists support this framing of the Insurrectionists more than non-Christian nationalists. But prophetic CNs are considerably more supportive, so much so that they are the only group that, on average, agrees with it.

We have probably been thinking about Christian nationalism in too narrow of religious terms  –  as only religious in the sense of a social identity group. Though there are a number of openly Christian nationalist congregations (though they would probably not accept that label), there are probably too few of them to explain the extent of the phenomenon. Though there is additional research left to perform, it seems obvious that belief in prophetic religion, which is widespread in American religion, bestows a level of certainty and righteousness that can propel projects forward with no guardrails. It just so happens that prophetic Christian nationalists are common and are likely to rally behind extreme groups on their side. It is no surprise that they have much greater support for the Insurrection and groups like those involved on that day  –  this is not going away any time soon.