When it comes to assessing the voting behavior of religious groups in 2016’s presidential election, analyses of evangelicals abound. Such a large subgroup of the American electorate (about a quarter of the population) warrants ample attention, no doubt. However, the share of the population that identifies as Christian has declined in the past decade. Meanwhile, both the share of the population that is unaffiliated, and the share that belongs to a non-Christian faith has grown. As America’s demographics continue to shift, these groups are likely to exert more substantial political influence in the decades to come.

One of the groups on the margins stands out: Buddhists. While they were just .9% of the total sample, Buddhists are part of a growing number of non-Christian and non-religious Americans who have voted consistently for the Democratic Party in at least the last decade and a half.

How Do Buddhists Compare to Other Groups?

The below figures show the share of the 2016 vote for U.S. President per religious tradition (left) and, more narrowly, the percent of the Buddhist vote per presidential candidate (right). The data were drawn from the 2016 CCES Common Content Dataset published by Harvard Dataverse. Buddhists, similar to the overall U.S. population, comprised about one percent (n = 844) of the CCES’s 64,600 survey respondents. 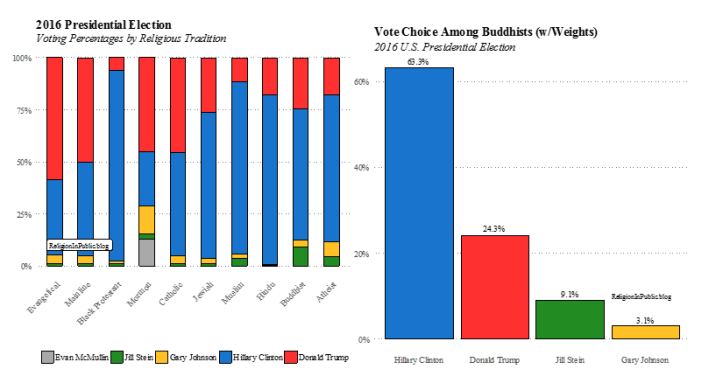 The group’s voting pattern does somewhat reflect the broader trend among non-Christian groups. Buddhists, like Jewish, Hindu, Muslim, and unaffiliated voters, strongly favored Hillary Clinton in 2016. This pattern stands in contrast to the preferences of Christian voters (excepting Black Protestants and, to a lesser degree, Catholics), who supported Trump at comparatively higher rates. While there is some variation in support across Buddhist denominational lines, Hillary Clinton was favored by a majority of Buddhists across denominational lines. However, Zen Buddhists did appear to account for a large share of the overall Buddhist vote for Jill Stein. Meanwhile, though the number of Vipassana and Zen Buddhists who voted for Trump was similar, a larger share of Trump’s received votes were cast by Vipassana Buddhists compared to his opponents.

How Did Race and Education Influence the Buddhist Vote?

Buddhists, far from a monolith, are comprised of a number of racial and ethnic groups. As the figures below show, racial differences reveal a number of cleavages in voter choice. While in the broader electorate Trump’s main source of support was white working class voters, among Buddhist voters, a plurality of whom were Asian Americans, Donald Trump received a substantial share (though not a majority) of the Asian vote. In fact, the largest share of Trump’s Buddhist vote was Asian, which suggests Asians were not beyond the reach of the Trump campaign. Meanwhile, white Buddhists, the majority of whom voted for Clinton, conversely accounted for a large share of the Buddhist vote for Jill Stein and Gary Johnson.

Education, in addition to race, may also explain some of the variation in the Buddhist vote. As the below figures show, differences in education reveal some meaningful patterns in voter choice among Buddhists.

Though a majority of high school graduates voted for Hillary Clinton, they accounted for a plurality of the vote for Donald Trump. Meanwhile, those with a four year college degree and higher largely voted for Hillary Clinton. Those with only some college accounted for a fair share of the vote for Jill Stein, while, interestingly, those without a high school degree largely voted for Clinton and Stein, with a negligible number voting for Trump.

The below figures reveal how these differences in education may have influenced the vote along racial lines. Asian voters accounted for a plurality of Buddhist high school graduates, and, as previously mentioned, those with a high school degree constituted a plurality of the vote for Donald Trump. Meanwhile, a larger number of white Buddhist voters had some college education, and, as previously noted, Buddhists with some college education were more likely than any other group to vote for Jill Stein.

The Significance of Buddhist and Other Non-Christian Votes

The significance of the voting behavior of Buddhists and other non-Christians, for the short-term at least, remains marginal in comparison to the significant influence wielded by Christian denominations. However, as America’s demographic landscape changes, non-Christian groups will likely see a rise in impact as they move away from the margins and more toward the center of American politics. Though a dramatic change in influence remains far off, it is nevertheless worthwhile to consider the voting behavior of currently marginal groups because these groups (if current trends hold) will not reside at the margins forever, and their political views and electoral preferences may one day more powerfully influence the political landscape.

However, just as Christian and non-Christian groups are not monoliths, neither are individual groups that fall under the Christian and non-Christian umbrellas. Education and race, as the above analysis reveals, intersected with Buddhist religious identity in meaningful ways to shape how Buddhists voted in the 2016 presidential election. While the overall Buddhist vote leaned toward Hillary Clinton, it broke from her on the far left as well as among working class Asians in a pattern that dovetails with the Democrats’ current troubles with working class whites.

Miles D. Williams is a graduate student who recently completed his Master’s degree at Eastern Illinois University in Charleston, Illinois. You can see more of his work on his portfolio.

Code for this analysis can be found on his Github.