You want young people to stay in church? Encourage them to go to college, get married, and have kids.

If you google “young people leaving church” there are millions of results. The front page is full of links from the usual suspects like Christianity Today and Focus on the Family but there are also stories from CNN and a pretty significant report from Pew Research Center. Anyone who has spent any amount of time around church knows that most pastors are obsessed with the idea of growth and are especially interested in getting young people to become active members of their congregation. Is there any insight social science can bring to this question?

In a previous post, I made mention of something called the life-cycle effect, which contends that church attendance fluctuates over time. It’s typically higher in our teenage years, but drops if we go away to college and then rebounds if we get married and have children. I wanted to take a look at that idea using data from the CCES. 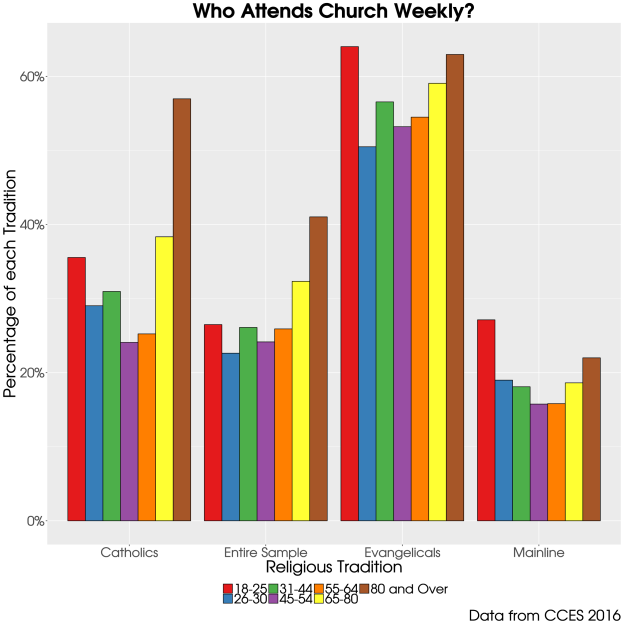 The above graph displays the percentage of respondents who report they attend church weekly from three major Christian traditions(as well as the entire CCES sample) broken down into seven different age categories. As is quickly evident, evangelicals go to church a lot. In fact, there was no evangelical age group where less than 50% attend church weekly. That is clearly an outlier when comparing evangelicals to mainline Protestants or Catholics. Notice for basically every religious tradition the relationship between age and attendance is bi-modal, meaning it’s high on the ends and then dips in the middle. For both Catholics and mainliners this is pronounced. So it seems that the return to church doesn’t necessarily happen once these individuals move into adulthood and begin having children. How do these attendance differences look comparing a number of religious traditions?

This graph above reports the average frequency of attendance for the larger set of American religious traditions. As was previously mentioned, evangelicals attend church on a regular basis, but so do Mormons. In fact, the rate of attendance for these two groups is statistically indistinct. Catholic attendance is relatively high for the oldest group (at least 80 years old), but is especially low for Catholics in midlife and moving closer to retirement. The same general pattern holds for mainline Protestants and Jews, as well. For these final three groups, evidence points to a pattern where attendance is highest as a teenager, drops during adulthood and possibly rebounds late in life. It seems that frequency of attendance does drop off into the mid-20s, but holds there until mid-40s when it drops again.

I wanted to consider another important facet of the life cycle effect: marrying and having children. I compared the average church attendance of those who were married vs those who weren’t among white, born again Protestants. There is clearly a difference in attendance in several age brackets. What’s especially noteworthy is what happens to 26-30 year olds depending on their marital status. If a 28 year old white, born again Protestant gets married his or her frequency of attendance does not drop, however if they do not get married it drops by nearly a point on a six point scale. That’s pretty staggering. The difference in attendance is clearly different between those who marry and those who don’t all the way from 26 to 80 years old.

But is this really about marriage or is it about being married and having children? The CCES asks if a respondent has a child under the age of 18. This does not capture individuals who are parents but their children have moved into adulthood, but the difference is still instructive.

There is a clear divergence that occurs, but only later in life. However, that difference might be due to the nature of the question: remember it asks individuals if they a child under the age of 18. For many individuals who raise children, they move into adulthood and leave the house when parents are in their mid 40’s-late 50’s and maybe that’s an explanation for the results here. Individuals still attend until their children leave the nest and then parental attendance suffers as a result.

While getting married and having children obviously has tremendous ramifications on the religious trajectory of young people, what about one other event: getting a college education? I compared average attendance for those who received a four year degree to those who did not in several major religious traditions.

Here the results are unambiguous. A college education does not make anyone less religious. There is no evidence to support that idea. At all. In fact, just the opposite. In all five of the major traditions I analyzed including the entire 64,600 CCES sample there is no single age bracket where someone without a degree attends more than someone with a degree. There are times when they are statistically indistinct, but that’s it. We’ve talked about that before, but it bears repeating.

To take a step back, it seems that the life cycle effect doesn’t exist in that way that researchers describe it existing. Young people still in high school attend church on a frequent basis. However, this frequency *can* decline when they move into young adulthood. However, if they get married and have children they will likely maintain frequent attendance throughout their life course, especially if they are born again Protestants. And, if they go to college they are actually more likely to attend church not only in their 20’s but the entirety of their lives.

One has to wonder, though, if merely the act of getting married is the cause or the effect of church attendance. It’s no secret that evangelicals get married at younger ages than the general population, but if a born again Protestants decides against marriage in their early 20’s that may be indicative of a rejection of some parts of the evangelical culture and theology. In this way, it may be that marrying young is a way for evangelicals to publicly pledge their commitment to their theology while those who eschew this practice may be loosening their association with the tradition.