Are People Leaving the Church?

I grew up Southern Baptist. When I moved into my teenage years I started attending church services a lot. Easily two to three times a week. Then I went to Greenville College, a Free Methodist school, which mandated chapel attendance three times a week. On top of that, I was also a youth pastor when I was in college. I taught Wednesday night youth group and then attended Sunday morning worship. If I were to ball park it, I bet I attended a religious service close to two hundred times a year for a good period of my late teens and early 20’s. As is the case with most things in life, I didn’t realize how unusual my behavior was because all the other students at Greenville attended church almost as much as I did. When I became a social scientist one of the many questions that I have tried to answer is simply: how unique was my religious experience as a teenager/young adult?

The figure above displays the distribution of religious attendance in the Cooperative Congressional Election Study (2016). To begin at the low end of the scale, consider that about half of Americans go to church less than once a year. Taken from this perspective, just attending religious services once a month is a little bit unusual (just over 1 in 3 Americans do so). But to move to the right of the scale it’s apparent that there is a small subset of the population who attends church at least once a week. About one quarter of Americans are weekly church attenders, which includes the just over eight percent who chose the most frequent option — they attend “more than once a week.”

How does attendance breakdown for young people vs. old? For more educated vs. less educated? And how about by racial group? To aid in understanding, I am going to break attendance into three broad categories:

“Never” means people who say that they never attend or seldom attend.

“Frequently” means people who attend at least once a week.

So, are young people Godless heathens who are abandoning church at a rapid rate? The answer to that is a clear and unambiguous “no”. In fact, those under the age of thirty age attend church at a rate that is not at all dissimilar to those who are in their 50’s and 60’s. Actually, those who were between 45 to 64 were the group most likely to say that they never attend, even more so than younger Americans. The only really difference between the age groups is those who are 65 and older are more likely to be frequent attenders. In that case 34.5% attend church at least weekly, which is 8-9% more than any other age group.

What about education? There’s a long history of social theorists arguing that as individuals become more educated, they become less religious. Karl Marx said that, “Religion is the opium of the people.” Emile Durkheim was convinced that as people gained education and wealth that they would gravitate away from religion. So, is that true? Not according to this data. In fact, one could reach the opposite conclusion – religion is actually more prevalent among the most educated population. The relationship is nearly linear: as level of education increases so does the proportion of individuals who attend church weekly. In another post I note that this relationship even holds up after including a few basic control variables.

Do some religious traditions attend church more frequently than others? It should be no surprise that evangelicals evince the highest rate of attendance, with just about half saying that they attend services weekly or more. Black Protestants do not lag far behind, however. In contrast, both Catholics and mainline Protestants indicate a similar level of attendance: about a third attend frequently while nearly 4 in 10 never attend. Obviously those of no faith have very low level of church attendance. 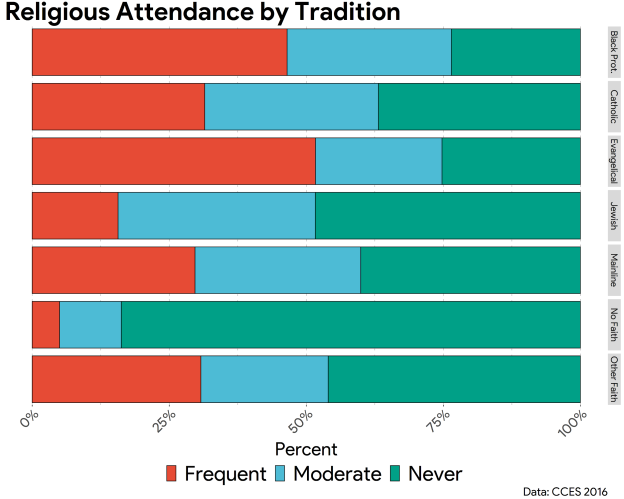 How has attendance changed over time? The General Social Survey offers a nice snapshot into long term trends as it has been asking attendance questions for over four decades. The most prominent trend is that those who say they never attend religious services is up dramatically. While just 1 in 10 Americans said that they were not active at all in a religious community in 1972 that number is now a quarter of the population. On the other hand the shifts in the most religiously active are much smaller. For instance, weekly attendance hovered around 27% from the mid-1970’s until the mid-1990’s. Since then there has been a small decline, with the average attendance hovering in the mid-20’s. Again, this is not a huge decline but the two most recent waves (2014 and 2016) could portend another downward shift in attendance. 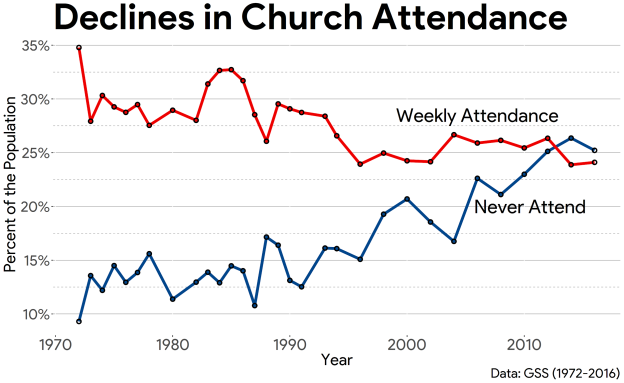 To take a broad view, church attendance doesn’t look like most Americans think it does. There is no evidence that young people are abandoning religion (at least any more than their parents did). There is no evidence that more educated people are less likely to attend church. There is good evidence that the share of Americans who never darken the door of the church has increased in the past four decades. So, if the frequent attenders have not seen a huge decline but the number of non-attenders has increased dramatically, what happened? One explanation is that moderate attenders have become non-attenders. For instance, the number of people who indicate that they attend “several times a year” has declined from 15% in 1972 to 10% in 2016. To me, this suggests that religion is becoming less and less “socially desirable” which should have implications for its influence in society and in political life.

Margolis, Michele F. 2018. From Politics to the Pews: How Partisanship and the Political Environment Shape Religious Identity. Chicago: University of Chicago Press.