Religion and Opinion Polarization on the Masterpiece Cakeshop Controversy

Even before the Court’s opinion was issued, experts were discussing the underlying controversy as the latest front in the “culture wars.”  Sociologist James Davison Hunter coined the term in his book Culture Wars: The Struggle to Define America (1991), and it entered the popular lexicon thanks to Pat Buchanan’s divisive speech at the 1992 Republican convention.  For Hunter, the term “culture wars” signified the deep religious divisions in public opinion toward policies like abortion, LGBT rights, and church and state.  Since then, some commentators have suggested that the “culture wars” are expanding into other issue areas, including religious liberty.  However, to date few have used empirical data to study this question.  This leads me to a question that I consider in ongoing research: Are the religious divisions Hunter found on “culture wars” issues apparent on attitudes towards religious liberty, including the controversy over whether Christian wedding service providers should be able to refuse to serve LGBT couples? Broadly, I find strong evidence that a substantial minority of Americans hold polarized attitudes on this issue, and religion is an important factor in explaining that polarization.

Researchers understand polarization to mean deep division.  If two people hold opposing positions, but see the issue from both sides and admit that the other side has valid arguments, then they cannot be considered polarized.  In contrast, if individuals can only see the issue from one side, then it is fair to label them as polarized.

Religious tradition appears to be a strong predictor of that polarization.  I divided the sample into six traditions: evangelical Protestant, mainline Protestant, Black Protestant, Catholic, Jewish, and Unaffiliated (the rest were left out of the analysis due to small numbers).  As we see in the figure below, almost 41% of evangelicals are polarized on the conservative side of the issue.  For the sake of comparison, mainline Protestants had the next highest percentage of polarized respondents (almost 17%).  Religion also helps explain which respondents hold polarized, liberal views: 43% of Jews and 38% of the unaffiliated could be classified as polarized on the liberal side of the issue. 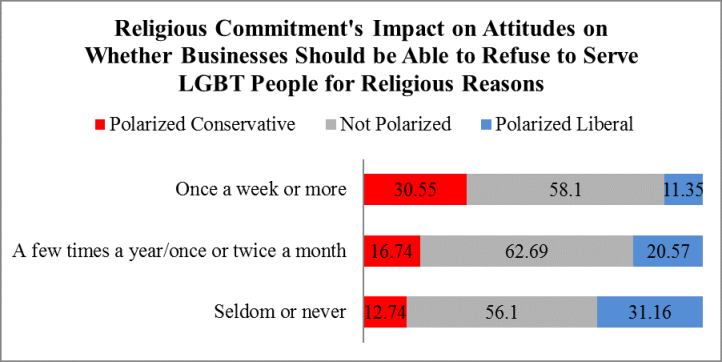 In short, the data suggest that a substantial minority of the American public is deeply divided on the question of whether Christian-owned businesses in the wedding industry should be able to use religious liberty as a reason to deny services to LGBT couples.  Furthermore, consistent with Hunter’s “Culture Wars” thesis, both religious tradition and religious commitment are important factors in explaining that divide. If the polarized attitudes on the controversy behind the Masterpiece Cakeshop case are any indication, the “culture wars” are likely to continue for the foreseeable future.

Jeremiah Castle teaches courses on American politics, political behavior, and research methods at Central Michigan University.  His work has been published in journals including Social Science Quarterly, The Social Science Journal, Journal for the Scientific Study of Religion, and Politics & Religion.  In addition, his book Rock of Ages: Subcultural Religious Identity and Public Opinion Among Young Evangelicals is under advance contract with Temple University Press.  This blog post is drawn from his working paper, “New Fronts in the Culture Wars?: Religion, Partisanship, and Polarization on Religious Liberty and Transgender Rights in the United States,” which will be presented at the American Political Science Association’s 2018 conference in Boston, Aug. 30-Sept. 2.  You can find out more about Jeremy’s research and teaching at http://jeremycastle15.wixsite.com/home.