While many Mainline Protestant denominations opened their pulpits and altars to female clergy in the 20th century, the issue of women’s ordination continues to be hotly debated among religious communities in the United States that maintain a male-only leadership policy. These include the Catholic Church and the Orthodox Church in America, the Church of Jesus Christ of Latter-day Saints, most congregations affiliated with the Southern Baptist Convention, Orthodox Jews, and Muslim congregations.

Many proponents of women’s ordination in these communities argue that women are needed in chief leadership positions because of the empowering effect it can have on other women. It is difficult, they argue, for women to feel engaged and committed to their congregations if they do not see themselves reflected in the leadership.

In contrast, those who favor male-only clergy argue that ordaining women is not necessary because there are very often a variety of other congregational leadership positions available to women. They argue that women commonly serve as assistant pastors, Sunday School teachers, small group organizers, ministry leaders, and/or advisers to youth and children’s groups. Women can be just as empowered, they argue, when they see women serving in these other prominent leadership positions, even if the role of head pastor or priest (or imam, rabbi, bishop, etc.) is reserved exclusively for men.

In interviews we collected for our new book, She Preached the Word: Women’s Ordination in Modern America (Oxford University Press), we find many women expressing such sentiments:

“There are so many other avenues in our church to lead. Whether it’s in women’s ministry or whether it’s in a Bible study. … It’s not like some churches where the women are silent and they don’t do anything. I mean we have so many opportunities within our congregation for women to step up and lead that I just don’t think, to my knowledge, no one has had an issue with not being able to preach or lead an adult ministry … I don’t know of any circumstances where that’s the case.”

“Women are serving all over the church so it’s not — you don’t feel like you’re in any way being suppressed or anything like that. There are plenty of opportunities to serve.”

While anecdotes such as this are common, we wanted to dig deeper into this question. We did this by analyzing results from a nationwide telephone and internet survey of American worshipers to see if there is any systematic relationship between the gender composition of lay leadership roles and levels of personal trust, investment, and commitment in those congregations.

We asked respondents to tell us whether their congregation currently allowed women to serve as the “principal leader” and also to give us an approximate estimate of what proportion of the lay leadership positions (“ministry and small group leaders”) were currently occupied by women as opposed to men. We found that while about 55% of Americans currently attend congregations where the chief leadership position is open to women, only about a third (37%) attend a congregation where women make up at least half of the lay leadership.

We then examined whether there was any relationship between the gender distribution of leadership positions and practices and feelings of trust, empowerment, identity, and commitment in those congregations. We also analyzed men and women separately, statistically controlling for a variety of other potential mitigating factors.* Our results are presented below: 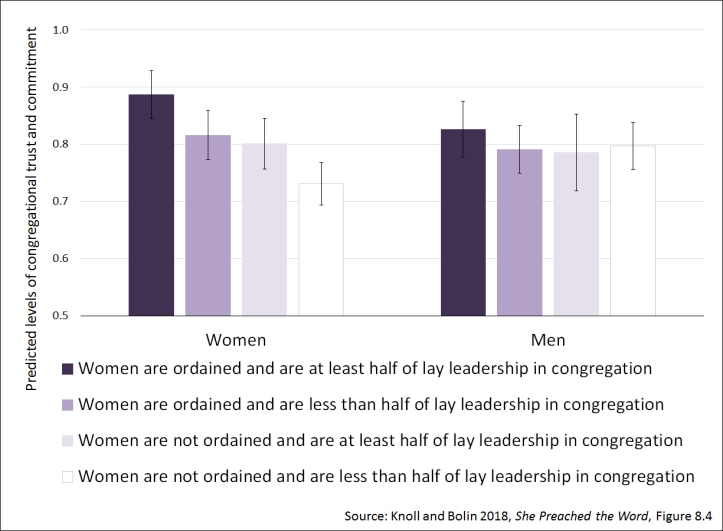 At the same time, we found that the highest levels of congregational trust and commitment are found among women whose religious communities ordain women and where women make up at least half of the lay leadership.

In contrast, the lowest levels of trust and commitment are found among congregations where women are not allowed to be pastors or priests and make up a minority of the lay leadership. Further analysis also showed that women report slightly lower levels of religious behaviors (church attendance, prayer, talking about God with others, etc.) when they attend congregations with male-dominant leadership practices as compared to women in congregations with more egalitarian practices.

For their part, levels of religious behaviors and congregational trust and commitment among men are unchanged regardless of whether their communities ordain women or ensure that women make up half of the lay leadership. They are equally likely either way to attend church, pray, and say that their religious leaders are responsive to their needs and interests. In other words, we found no evidence that men are religiously disempowered by the presence of gender equality in their congregation’s leadership practices.

In sum, we indeed discovered evidence that when it comes to female religious empowerment, congregations with male-only clergy can compensate to some extent by making sure that at least half of their lay leaders are women. Ultimately, however, the highest levels of empowerment for women occur only when women are invited to serve as chief clergy in their religious communities. Further, we found evidence that in congregations where women make up a minority of the leadership, levels of religiosity and congregational trust are lowered somewhat among their female worshipers.

Dr. Benjamin Knoll is the John Marshall Harlan Associate Professor of Politics at Centre College in Danville, Kentucky, @benjaminknoll28. Cammie Jo Bolin is currently a Ph.D. student in the Department of Government at Georgetown University in Washington, D.C., @cjobolin. Their book, She Preached the Word: Women’s Ordination in Modern America, is now available from Oxford University Press.

* The vertical axis shows the predicted levels of agreement with the four statements described above, combined into a single index variable on a 0-1 scale, using a multivariate regression analysis procedure that statistically controls for age, race/ethnicity, education, income, non-Christian affiliation, political ideology and partisanship, and degree of belief orthodoxy.