Young Evangelicals are as Republican as Their Grandparents

I am always skeptical of the “hot takes industry.” A lot of it seems to be writers who want to drive up clicks by taking a contrarian position that has little to no support in any empirical manner. For instance, Time Magazine published a piece in 2015 entitled, “Millennials: Why the Young Religious Right is Leaning Left.” I have actually written about Millennial Evangelicals here before, but I was poking around in the data recently and wanted to take another cut at it. This time my primary motivation was more about the uniqueness of evangelicals politically. Are millennial evangelicals just a slightly more conservative version of other young people? Is there any evidence that they are trending toward moderation?

The broadest assessment of that is to compare the self-described party identification of evangelicals vs the general population at various age groups. However, it’s important to note that for this chart and the next I only included white individuals who have at least a 2 year degree. That’s a crude way of holding two things constant that are of tremendous importance to party identification: race and education. I have written before about how evangelicals of color have become less likely to identify with the GOP in recent years, however white evangelicals haven’t budged in their support of Republicans. So, I wanted to see if there are any cracks in the facade coming from young white evangelicals. 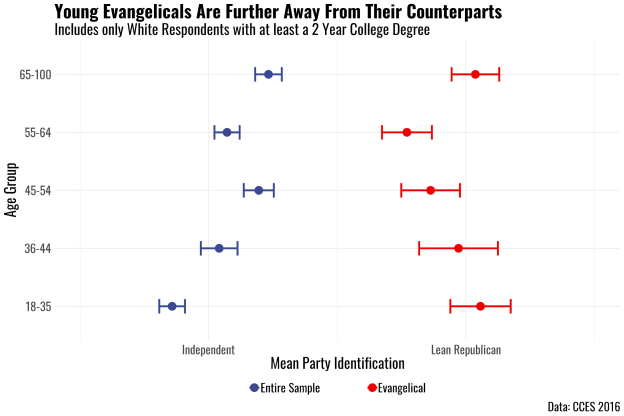 The visualization above displays the mean party identification score for white respondents with at least a 2 year college degree. The dots in blue are the entire sample, and the dots in red are just evangelical Christians. The capped lines represent 95% confidence intervals. It’s clear that there is a tremendous gulf between the two samples at any age. The smallest gap between the groups is among those 45 and 54 years old. And the largest gap might be the most surprising: it’s between individuals aged 18 to 35. On a scale from 1 (Strong Democrat) to 7 (Strong Republican), the distance in the youngest group is 1.2. Said another way: a young, white, educated evangelical is 20% more Republican than a young, white, educated person in general. It is crucial to note, however, that the gulf between these two groups is likely more attributable to the fact that young people, in general, are the most liberal age group in the sample. But it’s also fair to say that young evangelicals are just as conservative (if not more) than any other age group. 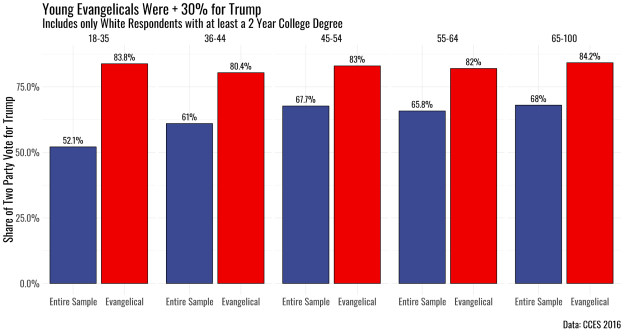 The graph above takes a look at this partisanship difference from a different perspective: vote choice in 2016. Note that among all age groups, Donald Trump received at least 80% of the two party vote from white, college educated evangelicals. In fact, his support was remarkably consistent, never going below 80% and never above 84.2%. On the other hand, we can see that Trump did exceedingly well among white, college educated people in general. In fact, the only real outlier in the entire chart is that only 52.1% of white, college educated young people voted for Trump. So, it’s likely that the distance seen in the first graph is attributable to young people being more supportive of Democrats, in general, than young evangelicals being even stronger Republicans. 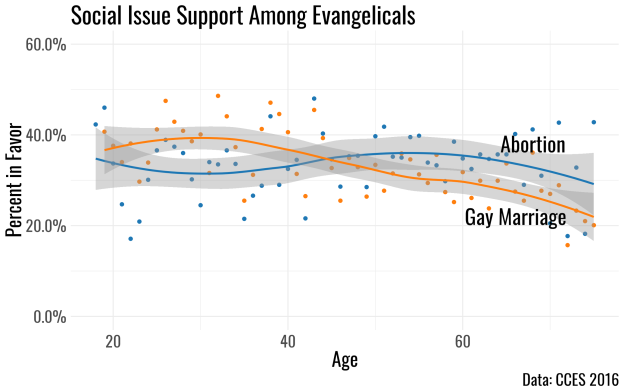 Maybe a difference can be teased out when we observe this phenomenon through the lens of two social issues: gay marriage and abortion. I wanted to see if younger evangelicals are more socially liberal than their older counterparts. Note that this graph is not restricted by age or education due to small sample sizes but includes only those who identify as evangelicals. There is clearly lower support for abortion than gay marriage among young evangelicals. Generally speaking evangelicals under the age of 40 are more likely to support same sex marriage than abortion. But as one moves from the left to the right of the age spectrum, two observations emerge. First, abortion opinion appears independent of age. Young evangelicals are just as opposed to abortion on demand as those in their 70’s. On the other hand there is an age component to gay marriage support with about 40% of younger evangelicals being in favor compared to 25% of those over the age of 70. Keep in mind, however that this support for gay marriage is much below the general population’s support. In the 2016 CCES, 60.7% of those polled expressed support for same sex marriage. 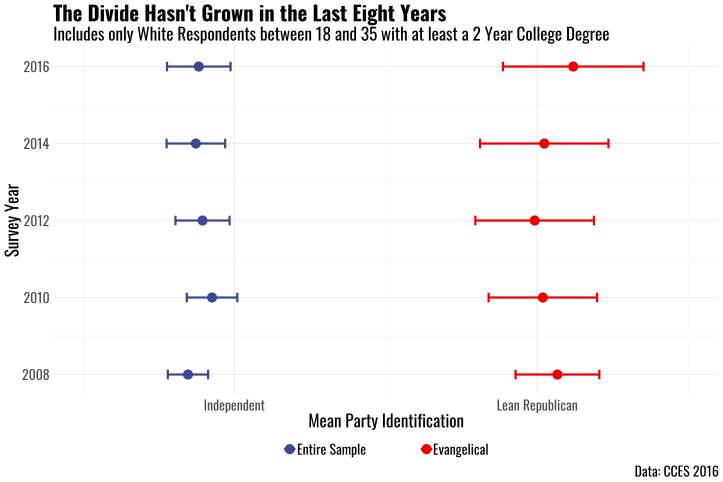 I must admit that this finding, especially regarding the gap between younger evangelicals and younger people in general, is troubling. We know that political polarization has only increased in recent years and that has led to incivility and a lack of any real lawmaking in Washington. The graph above however indicates that the gap between young evangelicals and young people in general has not widened, though. So, this is not something that can be pinned on President Obama’s time in office. It will be interesting to see if President Trump has driven a larger wedge between these groups.

On the other hand, these results may be indicative of something that is going on behind the scenes: a decline, overall, in the percentage of white evangelical Protestants in the population. Work by Djupe et al and Margolis among others has concluded that the drift rightward among evangelicalism has likely led many more moderate evangelicals to leave the fold and become either mainline Protestant or have no religion. What’s left in evangelicalism are the die hard ideologues in that scenario. That’s what we would be seeing here.

This reveals something that may be more insidious and damaging. If young evangelicals think that they are so distinct from other young people, their desire to engage in sincere dialogue and look for common ground has to be diminished. This lack of communication can do nothing but exacerbate polarization and possibly even increase the feeling that evangelicals are “embattled” in American culture.