Are There Pro-Life Atheists? Or Pro-Life Liberals?

I love when someone comes up with a new angle on fairly typical story and was delighted to read a piece by Ashley Fetters in The Atlantic over the weekend about pro-life seculars and liberals attending the March for Life in Washington D.C. It’s something that we often don’t even think about: pro-life people are religious people, however that’s not completely true. There are some people who take up the pro-life mantle for other reasons. Fetters, for instance, interviews some attendees who hold to a “consistent ethic of life” which means that life should be protected from conception to natural death. This approach was dubbed “the seamless garment” and was popularized by Catholic theologian Joseph Bernardin in the 1980’s. I wrote about that for Christianity Today, finding that just 4% of Americans are against abortion, the death penalty, and assisted suicide. Fetters notes that groups like Democrats for Life and Secular Pro-life were at the rally, espousing these exact positions. This seemed like an ideal area to analyze through the lens of some survey data. How many secular people are also against abortion? And, are there liberals who identify as pro-life?

The 2016 CCES asks a series of questions about abortion. Here they are (with the pro-life coding in parentheses):

These five questions were summed to create a scale where 5 is completely opposing access to abortion services and 0 is completely supporting a woman’s right to choose an abortion. As a reference, just 8.7% of respondents scored a 5 on this scale, while 21.5% scored a zero. The bottom two categories encompassed 41.7% of the sample, while the top two categories were 29.2%. This is a typical distribution of responses in the US.

The above graph displays the distribution of the abortion scale among three different political ideologies: liberal, moderate, and conservative. One overwhelming impression is how strongly liberals identify with the pro-choice movement. In fact, three quarters of liberals scored a zero or one on this scale, compared to 47.5% of moderates and just 16.1% of conservatives. On the pro-life side of the scale, over half of conservatives (54.7%) scored a four or a five. This stands in stark comparison to the liberals who are strongly pro-life. Just 1.2% of liberals scored a five, and another 5.1% scored a four. Are there liberals who identify as pro-life? Sure, but there are not many of them.. Interestingly, while whites make up 71.7% of the entire sample, they make up just 59.4% of the sample of liberals who scored a four or five, so there is some over representation of racial minorities among pro-life liberals. These non-white pro-lifers likely identify as liberals on issues such as civil rights or taxation, and abortion policy is not front and center in their political perspective.

To move toward the question of religion, the above graph displays the percentage of several religious traditions that agree with at least two of the five questions described above. This is obviously an arbitrary cut point, but I believe it’s instructive. There is clearly a strong relationship between conservative religious traditions and supporting the pro-life movement. For instance, nearly 85% of Mormons cross this threshold, while just over two thirds of Protestants can say the same. The right side of the graph is illuminating. While at least 60% of both Protestants and Catholics agree with two of these questions, the same can only be said for 28% of agnostics and just 16.8% of atheists. There are secularists who are (at least modestly) pro-life, but they are rare. 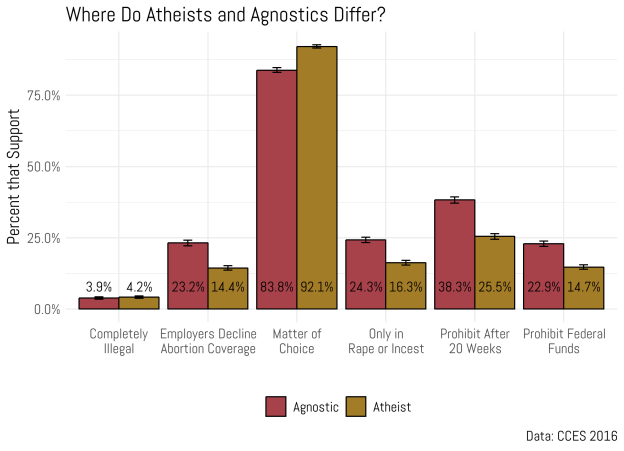 I thought it would be helpful to see in which areas atheists or agnostics were willing to support restrictions on abortion. The above graph displays the percent that support each of the six proposals that were listed in the 2016 CCES. The capped lines represent 84% confidence intervals (comparing any 2 CIs is the equivalent of a 95% significance test.) There is very little difference between the two groups, but by and large, agnostics are slightly more pro-life than atheists. The only issues where some significant traction can be found is a ban on so-called late term abortions (“prohibit after 20 weeks”). A quarter of atheists and nearly forty percent of agnostics agree with this stance. It’s telling that only about 1 in 25 atheists/agnostics support making abortion completely illegal. To put that in a broader context, there were 64,600 people in the 2016 CCES sample, of that figure only 323 were atheists or agnostics who believed that abortion should be completely illegal. That’s .5% of the total sample. 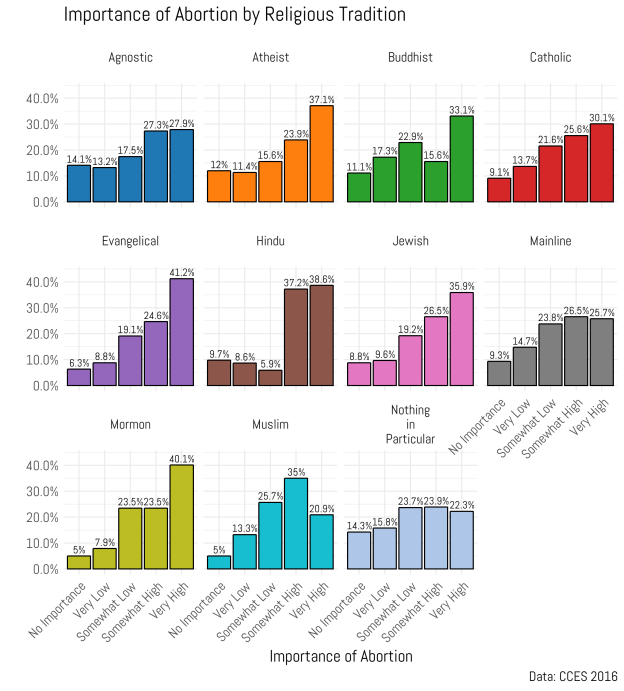 The another thought occurred to me: do atheists really care about abortion as much as Catholics or Mormons? I know that the issue clearly has a religious dimension, so it seems that seculars would shift their attention to some other area of politics/policy. Put another way, when people oppose a policy, then tend to report that it is not important. Luckily the CCES asks a series of questions that ask how important issues are to the respondent ranging from “not important at all” to “very high” importance. The above graph displays the distribution of these responses for ten different religious traditions. Note that 37.1% of atheists think that abortion is very important, while the same is true for 34.3% of Protestants and 40.1% of Mormons. Agnostics are slightly lower at 27.9%, however this number is only slightly lower than the 30.1% of Catholics who think that abortion is very important. What this graph doesn’t tell us is how that importance should translate to policy. Passion for an issue may may be linked to some groups being more pro-life and others more pro-choice. 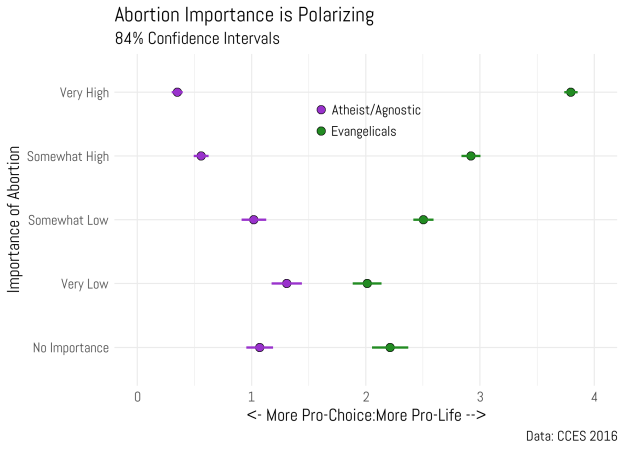 So, are there secular and/or liberal folks who are pro-life? The answer is yes, but they are clearly in a very, very small minority. In fact, much less than 10% of atheists hold any position that would restrict abortion, and that share is not much bigger among agnostics as well. This harkens back to something I noted up top. About 1 in 5 Americans scores a zero on the pro-life scale and another 1 in 5 scores a one on the scale, which means that 40% of the population wants little to no restrictions on abortion access, while less than 10% scores a 5. It’s obvious that there is a very vocal and organized pro-life movement out there, but we all need to understand that this movement is overwhelmingly conservative politically and the vast majority are Protestant or Catholic. If you want to be a pro-life atheist or liberal, there may be others like you out there but you will probably have a hard time finding them.