Islam, Social Justice, and Support for Democracy in the Muslim World

Arab Spring has brought about great enthusiasm about the prospect of democratization in the Middle East. However, the initial optimism about the future of democracy has quickly disappeared in the midst of democratic reversals, political instability, and the ensuing civil wars. Despite Middle East’s decent into chaos, a vast majority of its citizens continue to support democracy according to the public opinion polls. The puzzling case of democracy gap in the Middle East and in much of the Muslim world, therefore, continues to garner significant academic and policy attention. The bulk of the debate is centered around Islam’s compatibility with democracy leading to inquiries about the nature of association between one’s faith and democratic preferences. Does Islam play a role in shaping individual preferences about different governance models? Which values matter in shaping democratic and authoritarian orientations among citizens of the Muslim-majority societies? In a recent article published in Politics and Religion,I employ a novel perspective to answer these questions. The study uses survey data to explore the formative effects of religiously inspired social justice values on support for democracy in Muslim-majority societies.

Once, essentialist approaches proposing a cultural incompatibility between Islam and democracy, supposedly due to contentious civilizational discourses, dominated the debates about Islam and democracy. This is no longer the case. The debate has now shifted into the empirical social science field where numerous studies explored the associations between Muslim piety and regime preferences. After more than a decade of quantitative research in the field, however, much ambivalence remains about the precise mechanisms linking religiosity to support for democracy in Muslim-majority societies. At the current juncture, we can be confident that individual piety is either irrelevant to or at least not a negative determinant of democratic orientations among ordinary Muslim men and women. Yet, these correlations do not provide much insight into whether values emanating from one’s faith can be foundational in generating democratic preferences.

In Islam, Social Justice and Democracy, I argue that religion plays an indirect role in engendering democratic preferences through values that are prominent within the Islamic belief system. Social justice is a significant element of Islam’s ethical system that have important implications for governance, legitimacy, and economic policy in the Muslim world. The importance of social justice can clearly be observed in the scripture and in the writings of the Islamist intellectuals of both classical and modern ages. In effect, the political debates about the succession problem in the early periods of Islamic empire were exclusively centered around the notion of justice. There are numerous passages about charity and benevolence in the Qur’an and the Hadiths (i.e. sayings of prophet Mohammed). It is not only charity and the almsgiving (zakat) that are perceived as religious obligations that make social justice values so prominent among practicing Muslims. Largely neglected is the notion of ihsan which can be translated as benevolence toward people or graciousness in individuals’ dealings with others. Ihsanor benevolence is an important dimension of Islamic social justice conception.

In my article, I argue that egalitarian social justice values and perceptions of acts related to benevolence (ihsan) inform pious Muslims’ regime preferences. First, it can be established that, all else equal, a devout Muslim will hold economically egalitarian views due to the strong emphasis placed on charity and distribution of wealth in Islam. Second, I assume that benevolent acts should be widespread among the devout given its scriptural significance and especially the emphasis put on ihsan by Islamic religious authority. Islamic social justice values, in turn, form the basis for two indirect mechanisms linking Muslim faith to support for democracy. The crux of the argument is this: devout Muslims will lean favorably toward democratic governance thanks to the belief that implementation of redistributive policies in this system is more likely. Such preference stems from democracy’s policy compatibility with Islam’s egalitarian focus. Furthermore, religious individuals should favor democracy over other regime types, because preference for benevolence will engender favorable opinions about democracy as the most preferred governance model. This mechanism, I argue, operates through the central role of benevolence in achievement of maslahah (public interest), defined as the most important goal of policy-making in Islamic government (siyasa shar’iyya).  Some theological schools argue that the election of the ruler (Imam or the Caliph) require the consensus (ijma) of the ummah (Muslim community). This proposition relies on the assumption that democratic institutions are better suited to realize public interest and this feature of democracy makes it acceptable to the pious Muslims. As a governance model, democracy has a comparative advantage, or at least to be perceived as such, in realizing public interest. As a significant Islamic value, ihsan, then is likely to be instrumental in generating favorable perceptions of democracy thanks to this capacity.

Is there empirical support for these propositions? The World Values Surveys (WVS) provide the best available data for empirically testing the above propositions.  WVS include several questions about religious belief, religious attendance, distributive preferences, altruistic behavior, charity, and government involvement in provision of welfare services.  These questions allow me conduct nuanced statistical tests. Figure 1 shows the distribution of 19 Muslim-majority countries according to their average scores of benevolence and distributive justice preferences across levels of religious devotion. 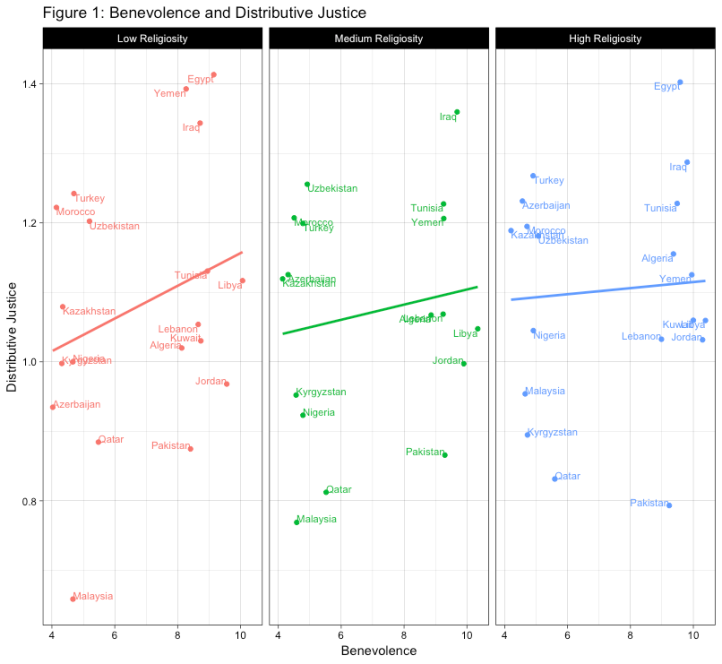 According to Figure 1, while there is a positive association between benevolence and egalitarian justice preferences, this association becomes less prominent among the most religious. This is highly counter-intuitive, but the on average, we can reasonably be confident that egalitarian beliefs and benevolence are related. More specifically, the Egyptian and Iraqi public opinion favors both benevolent and egalitarian attitudes whereas in Qatar and Malaysia social justice orientations remain relatively weak. By and large, a clear-cut division emerges between low-benevolence and high-benevolence countries with most Arabic speaking countries concentrated at the higher end and non-Arabic speaking societies at the lower end. What do these patterns imply for individual attitudes, especially with respect to religion’s indirect effect on support for democracy? Figure 2 shows the indirect effect of religiosity on support for democracy which is mediated by social justice values based on multivariate statistical analysis (see the statistical models here). 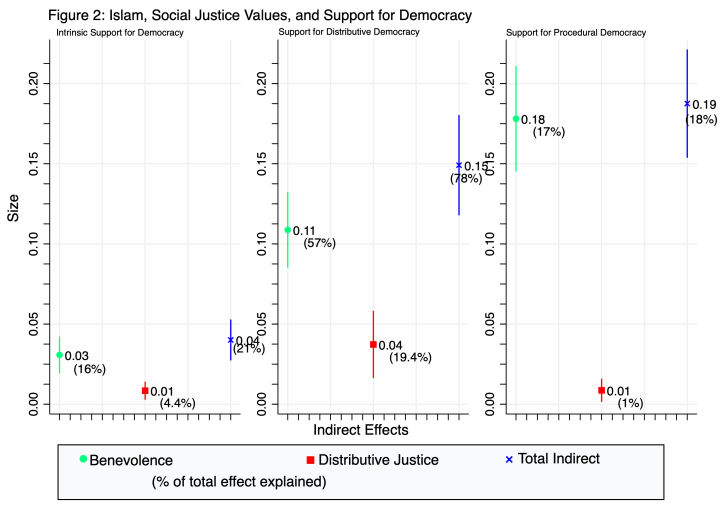 Social justice values are highly relevant in explaining support for democracy in the Muslim world. This is an important finding, because it resolves some of the ambivalence found in quantitative studies of Muslim political attitudes dealing with the micro foundations of the association between Islam and democracy. Personal religiosity informs social justice values and these values in turn generate democratic orientations among pious Muslims. Students of “Islam and democracy” believe that scriptural principles like shura or concepts of legal methodology like ijtihad and ijma can form the basis for democratic governance. The analysis of survey data in 19 Muslim majority countries show that social justice values promoting egalitarian distributive principles and benevolence (ihsan) can also form the basis for pluralistic ideas among ordinary Muslim men and women.

Sabri Ciftci is an associate professor and Michael W. Suleiman Chair in Arab and Arab-American Studies in the Department of Political Science at Kansas State University. You can follow him on twitter @ciftcisabri1.