Do Women Preach Differently Than Men?

I preach every Sunday. It’s something that I have been doing since my first year in graduate school. It’s something that I think about a lot – the craft of preaching. It’s one of the last few examples of a captive audience listening to someone speak for an extended period of time. The vast majority of church services I attend include me delivering the sermon, so I don’t get a lot of opportunities to hear other people preach. When I do, I listen in a completely different way than most people. I look for structure and style. I am looking for ways to improve my delivery, or new ideas to incorporate when I speak. That curiosity has begun to drive some of my research. I have heard very few female preachers in my life. That’s largely a product of growing up in a Southern Baptist Church, a denomination where women are forbidden from preaching. So, myself and one of my graduate students, Miles Williams, wanted to see if we could empirically assess if women have a different preaching style than men do. The results of that have been published in the Journal of Communication and Religion. You can read the full text here.

To acquire data we tasked one of my graduate assistants to start compiling sermons from an online database called Sermon Central. In total 885 sermons were collected – 288 were delivered by women, and 597 were from male speakers. The average pastor had written 7.5 sermons in the dataset. All sermons had been delivered between 1997 and 2018. The broadest finding is below: women’s sermons are much shorter than their male counterparts. In fact, the average sermon delivered by a man is about 50% longer than a female homily. Using the rule of thumb that the average person speaks 150 words per minute, that means that a woman in the pulpit will speak five minutes less than a man. But that speaks to a larger issue with this dataset. For mainline Protestants, it is relatively straightforward to find sermons from both genders as many of these traditions have opened up the pulpit to female clergy. However, among evangelical traditions it’s nearly impossible to see a woman in the pulpit. What we might be seeing here is more a function of mainline worship styles differing from evangelical church services than anything else. In many mainline churches the liturgy is commonly used. It’s a collection of Bible readings, prayers of the people, and weekly communion that takes up time that could be used for the sermon. For evangelicals, the sermon is the centerpiece of the service, often taking up half of the worship time.

We wanted to use the dataset that we had collected to test some of the major theories in gendered communication, which is the idea that men and women use different kinds of words for a variety of sociological reasons. For instance, vast swaths of literature indicate that women use more tentative speech than men. Consider these two examples:

“What this passage from the Gospel of Mark means is….”

“What this passage from the Gospel of Mark may mean is…”

Notice how the second statement has some hesitancy to it? That’s the kind of language we were looking for in the visualization below. We calculated how often each gender used one of seven terms that often denote verbal hedging. What we find is that there is some evidence for hesitancy. For instance, women are much more likely to use the term “may” than men, as well as “might.” However, men used the term “sometimes” with a higher frequency than female pastors. In addition, we analyzed how often pastors used first person singular pronouns like “mine” and “me” vs. first person plural pronouns (“us” and “our”). That is visualized here. What we found was that women are slightly more likely to use inclusive pronouns like “our” and “we” while men are more likely to say the word “me.” Both of these findings are evidence of the fact that gendered communication does not end when someone enters the pulpit on Sunday morning.

Additionally, we wanted to see which words were used by women more often than men and vice versa. To do that we counted each word used by each gender and then ranked the top 100 for each. Then we looked for words that had the largest disparities in ranking between the two lists. That is graphically displayed below. Words that were used more by men than women have the orange lines, while words that women used more often have blue lines. For instance, the term “Lord” was the fifth most used word by men but it was only the 31st most used term by women. Another interesting disparity is the word “power.” It was the 28th most used by men, but the 68th most used word by women. For women, family came up much more frequently (23rd vs. 50th), as well as money (46th vs 82nd). Another finding that plays into gender stereotypes is the word “feel.” That word ranked 49th for women but just 94th for men. 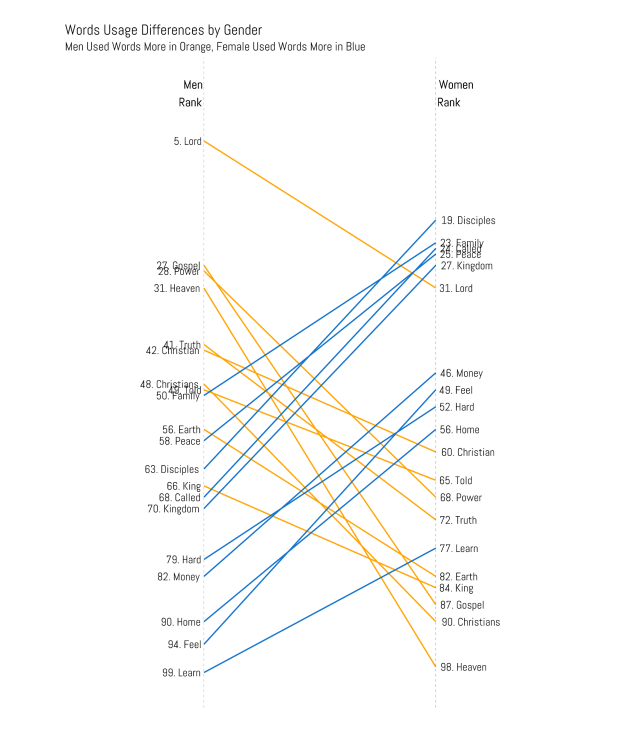 Finally, we wanted to assess the overall sentiment of the language used by men and women when they preached. To do that we matched sermon texts with the NRC Emotion Lexicon. It has ten categories for words ranging from anger to sadness to trust. To see the scores on all ten dimensions for each gender click here. However, the Lexicon also scores words as either positive or negative sentiment. Positive terms include: joy, peace, and hope. While negative words are terms like: hate, mad, enemy. We broke each of the 885 sermons into five equal parts and assessed the overall sentiment at each of those checkpoints. The results of that are visualized below.

As can be seen, the differences in sentiment between the two genders is statistically the same in the first three sections of the sermon, and notice that the overall scores are relatively stable through this point of the message. However, as the sermon begins to move towards its conclusion, positive sentiment begins to climb for both genders, however the rate of increase is much steeper for women than it is for men. According to these results, female sermons become nearly twice as positive at the end of the message than they were in the middle. The increase for men is just half as much. It would appear that women do not want to leave their congregations on a sour note and fill up the conclusions with happy words and positive affirmations.

Taken together, what we have found is that women and men approach the craft of homiletics with different perspectives. Women aren’t as verbose as men. Women are also more likely to include hesitancy in their speech as well as more inclusive pronouns. We also find that the choice of words for women is much different than men. Consider the fact that men use the word “power” much more often, while women seem to like the word “feel” more than men. However, as previously mentioned – a lot of this might be the result of comparing mainline homilies vs evangelical sermons. We think that this is an area of scholarship that is pregnant with possibilities for future research. Do black Protestants preach differently than their white evangelical counterparts? What biblical passages are used the most by each gender? How much of the sermon is concerned with reading the Bible vs. telling stories and anecdotes? Natural language processing has opened up an entirely new style of research and we hope this will inspire others to continue the exploration.

Miles D. Williams is currently pursuing a PhD in political science at the University of Illinois Urbana-Champaign. He can be contacted via his personal website.