“So, what’s the future of American religion look like?”

I get asked about it once a week and I always balk at the question. I am very leery of the prediction space. It’s not what social scientists are trained to do. We try to explain why things happened, not what is going to happen in the future. It opens us up for a lot of criticism. Case in point: Donald Trump winning the 2016 presidential election. The headline from POLITICO: “How did everyone get it so wrong?” accurately describes the sentiment. So, it’s with a great deal of trepidation that I offer a modest prediction of what American religion is going to look like a decade from today.

First, some discussion of how I arrived at this analysis. I started with the simple calculation I made when the 2018 General Social Survey was released in March of 2019. The sample is divided up into seven groups: evangelical, mainline, and black Protestants, Catholics, Jews, those of other faith groups, and the religiously unaffiliated. Then I asked my statistical software program to draw a straight line through those 36 years of data points in such a way that the distance between the point estimates and the trend line were as small as possible. Then, I extended those straight lines out from 2018 to 2030. It’s in no way complicated, but it has a number of important caveats that need to be laid bare.

Without any more pageantry, here are the results of this simple prediction model.

I have chosen to include the standard errors in the visualization because I want the reader to be aware of how uncertainty works in a model like this. Before 2018, the standard error is based on how dispersed the point estimates are from the linear estimate. For instance, the shaded area for mainline Protestants in the 1980’s is wider than it is once you move into the late 2000’s. That’s because the estimates for mainliners have become more linear and predictable over time. The same basic logic applies when the model projects forward. As it moves further and further away from a data point, the uncertainty goes up. This means that the estimate for 2030 has a wider range of likely values than the estimate for 2020.

Really the most important thing I was looking for was when the lower bound for the religiously unaffiliated was higher than the upper bound for any other religious group. Or put more directly: when does the model say that the “nones” are going to be the largest religious group in America? That answer is in 2029. This is the year that if nones grow at the lowest path projected and Catholics grew at the highest path, the religiously unaffiliated would still be larger. The nones are estimated to be 27.1% of Americans in a decade. If the question is when they will be the largest group, irrespective of margin of error the answer is 2023 at 24.1%.

I want to focus on the results of the projection for just the largest religious traditions first. The slope graph indicates where the religiously unaffiliated, Catholics, and evangelicals are in 2018 vs. their projected size in 2030. The story is of stagnation for two groups and growth for one. According to the projection, the religiously unaffiliated will comprise 27.1% of the population in 2030, an increase of four percentage points in 12 years. At the same time, both Catholics and evangelical Protestants will remain essentially the same size.

I think that’s a slightly optimistic view of both Christian groups. Demographics are not working in favor of evangelicals specifically. It’s been well-documented by Robby Jones of PRRI and Greg Smith at Pew Research that the share of white Americans is declining, as is the number of Americans who identify as Christians. That spells an impending disaster. However, remember that this model takes none of that into account. It has no knowledge of racial composition, generational effects, or migration patterns. All together, I can’t imagine that either of these groups will be the same size ten years down the road, but it’s impossible from this model to know how much smaller they would be either.

The other four religious traditions indicate a fairly similar pattern – mostly stagnation with a dramatic exception. For black Protestants, those of other faith groups, and Jewish Americans, the model predicts no significant change in relative size between 2018 and 2030. The outlier here is mainline Protestants. In 1976, they were the largest religious group in America. Three in ten Americans identified as a mainline Protestant. In 2018, they were at 10.8%. The future looks bleak. In fact, this estimate indicates that their numbers will be more than halved in the next decade. This falls in line with a piece by Ed Stetzer at the Washington Post with the headline: “If it doesn’t stem its decline, mainline Protestantism has just 23 Easters left.” Realistically, one must believe that there is a natural “floor” that will be discovered among mainline Protestants where the decline will slow considerably or even stop. However, that may be a long way off. 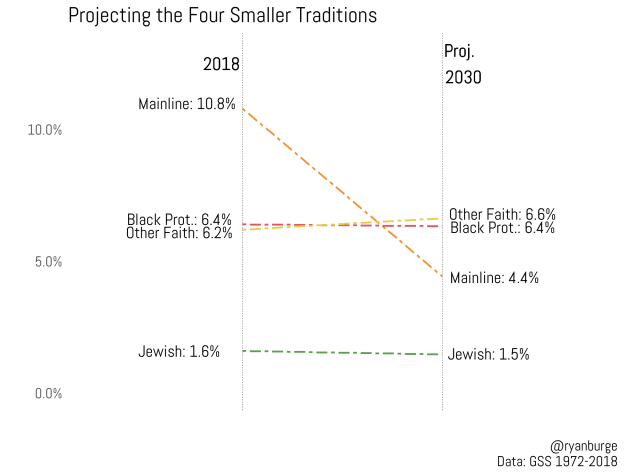 Religious demography is a zero sum game, as long as we include the religiously unaffiliated. As one tradition grows larger another must decrease in size. That’s essentially what we see here. The religiously unaffiliated will grow four percentage points, while mainline Protestants will decline 5.4 points. As one gains, the other must lose, which has been the case for the last four decades. It is worth noting, though, that this model predicts quite a bit of stability in the next decade of American religious demography. The size of most of the religious groups in America are predicted to be almost exactly the same as they are now. However, two groups will change – mainlineProtestants and the religiously unaffiliated. It doesn’t take an advanced degree in social science to conclude that one is growing at the expense of the other. The more difficult question is: why? Why haven’t evangelicals seen their numbers erode more significantly – that’s likely because of Hispanic evangelical growth? How has the Catholic church managed to weather the storms of multiple scandals? And is the growth of the nones going to follow a logarithmic trajectory or one of exponential growth? Will they find a “ceiling”?

I am fully aware that someone will likely post this to Bad Takes Exposed in ten years. But, it’s been a fun exercise.