Reasons to be Cautious About a Gen Z “Religious Rebound”

The interesting new findings about stability in the proportion of Americans who are religious nones across Millennials (1981 – 1996) and Gen Z (born in 1997 or after) led me to dig deeper into comparing these cohorts with the GSS.  Before delving into these comparisons, three points of caution (about my caution) are in order.  First, Gen Z members are all 23 or under, so they are currently in a very particular position in the life course, and there are likely to be important changes that occur as the cohort ages and new members emerge into adulthood. Second, and related, we are comparing Gen Z to Millennials after the latter have already undergone this time period in the life course, so the comparisons themselves must be understood as preliminary and can only be undertaken thoroughly once Gen Z members have all come of age.  Third, the sample size remains relatively small for Gen Z (n = 396) in the GSS because they have only been eligible for the survey in the last two waves.

Now to get into the reasons to be cautious about claiming that the “nones” are slowing in their growth. First and most importantly, although Gen Z members are slightly less likely to be nones (27%) than Millennials (29.9%), they are more likely to be non-theists (13.8% for Millennials; 18.5% for Gen Z). More striking, far fewer in Gen Z are certain about their belief in God (29.4%) compared to Millennials (46.8%). Religious doubts are much more common among Gen Z.  It’s possible these are life course effects resulting from being in emerging adulthood; but the available data suggest this is not the case. Comparing Gen Z to Millennials in the 2000 GSS, which would put them at roughly equivalent places in the life course, Millennials reported levels of belief in God that are essentially the same as those shown for Millennials across all available survey waves. 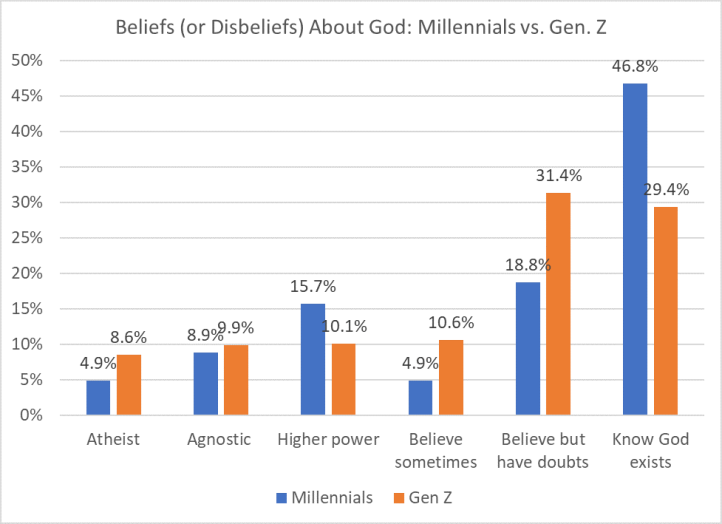 In addition to evidence that non-theism is increasing in the GSS, work I have done comparing the 2007 Pew Religious Landscape to the 2014 Pew Religious Landscape also shows that Millennials are increasing in their self-identification as atheists or agnostics over time (Baker 2020). So one interesting change that does seem to be occurring is that both non-theism and theistic doubting are becoming much more common among younger cohorts of Americans.

Second, Gen Z nones will probably go up over the next decade, just as Millennials did. Gen Z is barely out of college, and many aren’t even there yet.  It’s too early to say how it will shake out, but two waves of the GSS already show an increase in nonreligion for Gen Z. Millennials started at 19% nones in 2000, the first wave of the GSS where they were eligible, and are sitting at 35% none in the 2018 GSS. Gen Z started at 24% none in the 2016 wave, the first where they were eligible, and increased to 29% in the 2018 wave.  That will likely continue to increase over time as Millennials did.

Third, if we look at religious salience, Gen Z is less likely to say they are “not religious” (25.3%) compared to Millennials (28.4%), but Gen Z is also less likely to say they are “very religious” (7.8%) compared to Millennials (10.2%). So, if anything, Gen Z is more “meh” about religion. This in and of itself can be taken as an indicator of secularization, in that religion or irreligion ceases to be a defining identity status.

Fourth, in terms of private religious practice, members of Gen Z pray less than Millennials. Gen Z Americans are less likely to say they pray “several times a day” (12.9%) than Millennials (18.6%) and more likely to say they “never” pray (26.1% compared to 21.9%).  At the same time, however, we do see more religious service attendance among Gen Z compared to Millennials.  Again though, this may change over time as the cohort ages. 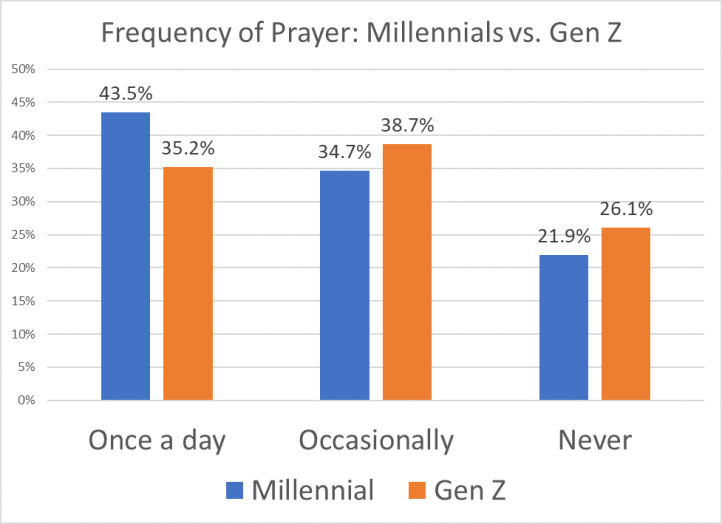 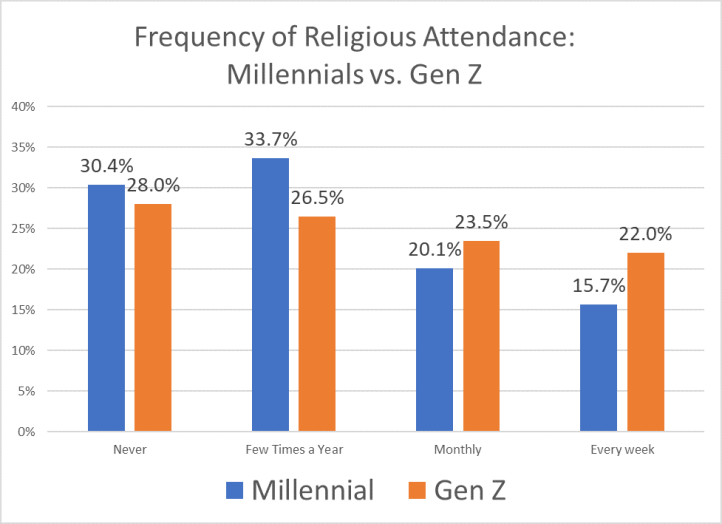 All of these different aspects of religiosity considered, stability in religious nones between Millennials and Gen Z is an interesting finding, but there’s no evidence of a religious revival afoot. Instead, non-theism and indifference are continuing to increase, and we can reasonably expect this to continue as the Gen Z cohort ages and matures.  This remains to be seen, though, as this cohort remains very young. One thing that is for certain: there are plenty of interesting and fruitful topics for political scientists, sociologists, and psychologists to study about religion and secularity among the youngest generations of American adults.  Gen Z members will likely continue some patterns found among Millennials, and also make their own new expressions and patterns of religiosity and secularity.

Joseph O. Baker is associate professor in the Department of Sociology & Anthropology at East Tennessee State University, and the editor-elect of Sociology of Religion. He is the author of American Secularism. His latest books are Deviance Management and Fear Itself.