Christian political scientists didn’t vote for Trump in 2016. Will 2020 be different?

As we move into the final year of Donald Trump’s first term as president, many of the questions conservatives had in 2016 about a hypothetical Trump administration have been answered: he has nominated unquestionably conservative judges at a brisk and steady rate; he has fulfilled campaign pledges on deregulation; and he has been a steady and vocal friend of the pro-life and Christian conservative communities.

By now it is old news that white evangelical Christians dutifully supported Trump’s 2016 election bid at a rate on par with (and, by some estimates, surpassing) support for recent Republican presidential candidates. And given the results of his first term, it should not be a surprise to see Trump benefit from a high level of support from this bloc once again.

Three years ago, Religion in Public published results from a 2016 survey of a unique group of (primarily) white evangelical Christians: political science faculty affiliated with the Council for Christian Colleges and Universities (CCCU). In that article a coauthor and I wondered whether there was reason to believe that this group would be different from the broader white evangelical Christian movement in its preference for a Trump presidency.

And that is precisely what we found. Despite preferring the Republican candidate by a majority margin in the 2004, 2008, and 2012 elections, 2016 marked a sharp departure in presidential vote choice among CCCU political scientists: just 25 percent of respondents reported voting for Trump in 2016, compared to 36 percent who voted for Hillary Clinton and 39 percent who voted for somebody else.

But after nearly a full term of President Trump, how are political scientists at evangelical Christian institutions of higher education planning to vote in November? I surveyed many of the same people from 2016, asking them how they plan to vote in 2020: for Trump, for the Democratic candidate, “it depends on who the Democratic nominee becomes,” or someone else. I also asked them about their vote choice in 2016, 2012, 2008, and 2004, as well as their party affiliation.

The survey was sent to 186 faculty at 73 colleges and universities in February 2020, and had a response rate of 45 percent. While the respondents were evenly distributed by academic rank and subfield within the discipline, they were overwhelmingly (83 percent) male. As for party affiliation, 29 percent identified as “lean Republican” and 27 percent as “strong Republican,” compared to 20 percent and 12 percent who identified as “lean Democrat” and “strong Democrat,” respectively. 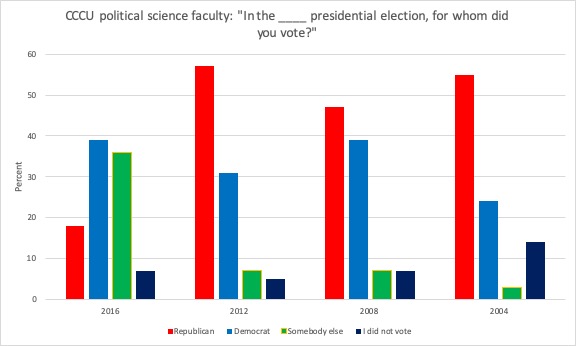 Among those who said they would consider voting Democratic depending on the nominee, Amy Klobuchar was most popular (25 percent), followed by Elizabeth Warren (17 percent) and Joe Biden (15 percent). Of this group, seven percent said they prefer Bernie Sanders, the same percentage as those favoring Pete Buttigieg. For these respondents, the question of who becomes the Democratic nominee matters in determining their eventual vote choice. And with the success of Sanders and Buttigieg early in the nomination process, CCCU political scientists may not be willing to vote for the Democrat after all.

While CCCU political scientists still clearly identify more with Republicans than Democrats, there is something about Donald Trump that continues to give them pause about their vote choice in 2020. In 2017 my coauthor and I posited that this could be due to Trump’s repeated criticism of certain American political and legal institutions, something that might resonate more with political scientists than with rank-and-file evangelicals Christians.

Whatever the reason, the division between CCCU political science professors and white evangelical Christians in their support for Donald Trump is stark. Whether this small group of evangelicals comes back to the Republican nominee in 2024 and beyond certainly won’t influence electoral outcomes, but it may continue to illustrate Trump’s legacy and influence on American politics long after he is gone.

Daniel Bennett is an associate professor of political science and assistant director of the Center for Faith and Flourishing at John Brown University. You can follow his work on his website and on Twitter.