Older Nones Are Growing Larger, But Not More Republican

I mentioned something the other day on Freethought Radio that I thought needed to follow up on – older nones. While the conception of the religiously unaffiliated oftentimes skews toward college students being introduced to Nietzche in a philosophy class, in actuality the nones are not just a bunch of kids. That’s due to the fact that they have gotten so large. It’s hard for a group to make up 30% of the population and be homogeneous. So, are nones getting older? And, could that have an impact on electoral politics?

Let’s start by taking a look at how the age demographics of the religiously unaffiliated have shifted in just the last decade. Using the CCES, I analyzed the change in age for all three types of nones: atheists, agnostics, and nothing in particulars. Ten years is not a long period of time when it comes to demography, but the trends come through clearly. 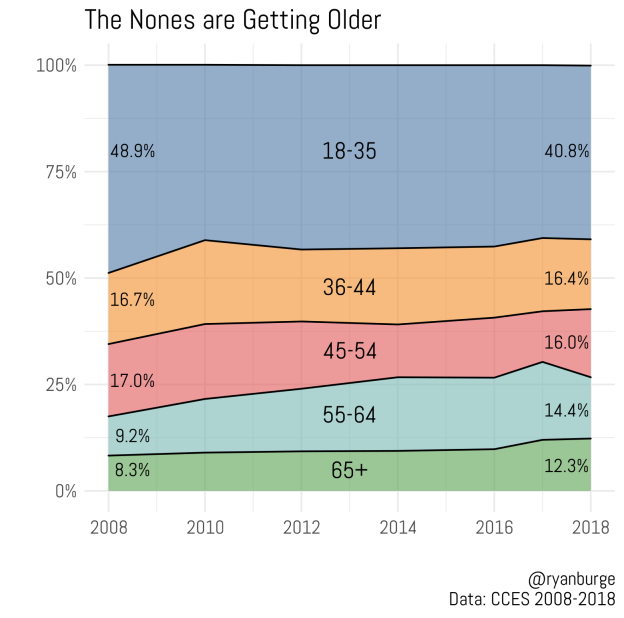 It is true that the nones do tend to be younger. In 2008, almost half of all the religiously unaffiliated were between the ages of 18 and 35. On the other end of the spectrum, just 17.5% were at least fifty-five years old. But in the last decade the share of the nones who were in the youngest age group has dropped by eight percentage points. At the same time, the share of nones who are middle age (36-54) has declined just 1.3 points. But among the two oldest age groups there has been noticeable growth. Nones between the ages of 55-64 have grown 5.2 percentage points, while those who are at least 65 have grown four percentage points. Together, those 55 and over now make up a quarter of all the religiously unaffiliated in the United States.

But, here’s where it gets really interesting. There’s a long standing truism in American politics – older voters tend to favor the Republican Party, all things equal. To illustrate that I calculated the share of Christians who identified as Republicans in six different age brackets. The upward trajectory is clear. While just 37.2% of the youngest Christians are Republicans, in every successive age group, that percentage moves up a few points. For those Christians who are at least 75 years old, 63.9% affiliate with the Republican Party.

However, the nones seem to defy the conventional wisdom about age and partisanship. There does seem to be a move toward the GOP between youth and middle age. For instance, just 14.9% of those 35 and under identify as Republicans, but that goes up to 23.3% for those between 45 and 54. But then, something noteworthy happens – the trend just stops. In fact, there is no statistically significant difference between the share of nones who identify as Republicans among 45-54 year olds and those who are 75 and older. The gap for Christians is sixteen points, but for the nones it’s just four points and inside the margin of error.

I wanted to dig down below the surface of this a little bit. Partisanship can be a pretty blunt measure. However, issue preferences can shed some light on just how the concerns of each religious group changes based on age. The 2016 CCES asked people to indicate how important they felt each of fifteen issues were ranging from very high importance to no importance at all. The graph below is how issue preferences shift from the youngest to oldest age groups among Christians. (A high res side-by-side image of both of these graphs is available here.)

The nones do share some similarities. For instance, the same pattern of jobs being less important to older people and social security being more important is evident here. In fact, both groups of 75 year olds have the same issues in their top four, just in a different order. But there are differences. The concern for the environment has a completely different pattern, which is especially when comparing the oldest respondents. The oldest Christians rank it 14 out of 15, but for the oldest nones it’s 6th. Gun control is the fifth most important issue for the oldest nones, but it’s 12th for Christians who are 75 or older.

Looked at this way, it becomes clear why older nones don’t identify as Republicans – their policy priorities are not aligned with the GOP. After the top four issues (social security, health care, corruption, and national security) the most pressing issues for the oldest nones are gun control and the environment – not areas that favor the GOP. It’s also worth pointing out that the oldest Christians ranked the budget deficit as 7th most important, but for the oldest nones it’s 13th. Clearly, older nones are just more to the left of the political spectrum.

A spate of stories came out last week that says that COVID-19 and Trump’s handling of the pandemic may be costing him the votes of older Americans. But, this data seems to indicate that there is a much bigger, structural threat. Older voters are becoming more likely to be religiously unaffiliated, and this bloc of voters is no sure thing for the GOP.