Can You Be An Evangelical and Never Go to Church?

Every once in awhile I will post a graph that has a category for evangelicals who never attend church. And it’s inevitable that I get the following response:

How do you never go to church and still want a religious label?

I get the impulse here. Most people think of religion as both something you do (like attend church) and something you believe (heaven and hell, literal Bible, etc.) However, that’s not the primary way that I think of American religion. I believe that choosing a religious affiliation on a survey is an exercise in placing oneself in social space. If I never attend church but was raised evangelical, a survey question about religious affiliation puts me in an interesting spot. I could just as easily say that I’m “nothing in particular” as I am to say Southern Baptist.

But when someone chooses Southern Baptist when given all those other options, they are making a conscious choice to say that Southern Baptists are “people like me” (to use a phrase from Achen and Bartels). Taking on that identity means something. I think it means I still hitch my wagon to the Southern Baptists in some meaningful way – that we are on the same team. And the data backs me up on that. 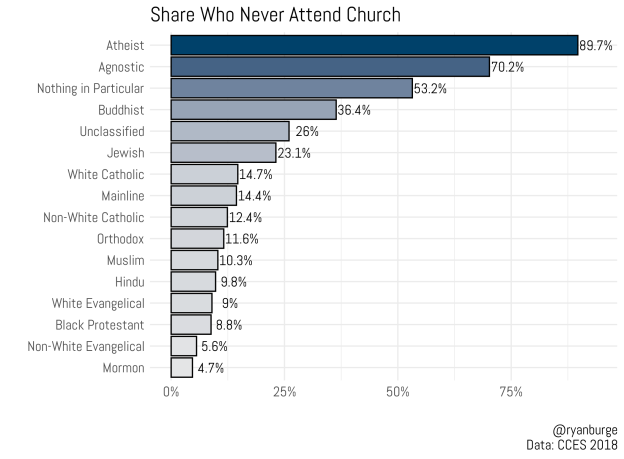 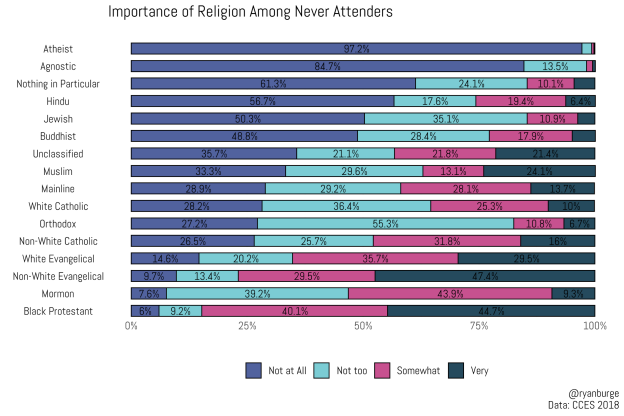 Note that the groups comprising the nones are the most likely to say that religion is not at all important. That’s true for 97.2% of atheists, 84.7% agnostics, and 61.3% of nothing in particulars. That makes some sense. However, once we move into a number of theistic groups some significant differences emerge.

About 3 in ten white Catholics say that it’s not at all important, it’s 26.5% of non-white Catholics. Mainline Protestants are just slightly higher at 28.9%. But there’s a big drop when moving to evangelicals. One in ten non-white evangelicals who never attend say that religion is not at all important, it’s slightly higher for white evangelicals (14.6%). It’s clear from this angle that never attenders are not created equally. Many of them still put a great deal of emphasis on their religion, even if they never go to church. 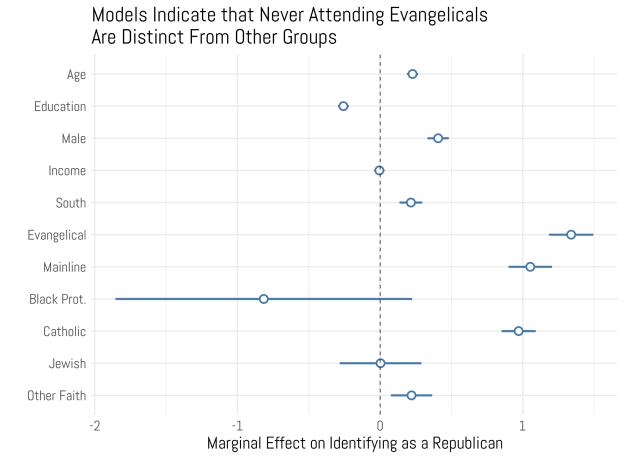 The demographics work as expected: older folks, men, and those living in the South are more likely to identify with the GOP. Higher levels of education were negatively related to Republican affiliation. But speaking in terms of religious tradition, a never attending evangelical is more likely to identify as a Republican than mainline Protestants and Catholics (nones were the reference group here). In short, people who identify as evangelicals despite never attending church are more closely linked to the GOP than other nominal Protestant identifiers even after controlling for key demographics.

The model bolsters my central assertion – choosing to identify as an evangelical, even among those who never attend church, sends an important signal about how you see yourself and who you see as “your people.” As such, religious affiliation moves beyond the realm of theology and becomes both a social and political construct. So, once and for all, you can be a never attending evangelical and it matters.