Evangelical leaders are as negative on immigration and Islam as Donald Trump.

Several issues, as well as the speechmaking and Tweets of Republican presidential nominee (and now President) Donald Trump, were highly contentious throughout the primary and general election season leading up to the November 8 election. Much of Trump’s rhetoric, especially when it came to immigration, terrorism, and discussion of Islam, was especially divisive, not only for the content but also in the delivery of his message. Yet, even while many evangelicals attempted to distance themselves from Trump’s at times coarse or polarizing language, many still preferred Trump to Democratic nominee Hillary Clinton.

For example, survey data from as early as June of 2016 showed that evangelicals were likely to favor Trump to Clinton by relatively large margins when it came to defending the country against terrorism and dealing with immigration, which were issues closely wrapped up with discussion of Muslims.

Trump, therefore, appeared to resonate with evangelicals, even if some evangelical elites condemned Trump’s crass presentation. That suggests a question: did evangelicals support Trump despite his message or was he representative of their expressed concerns?

To answer this question, I utilized a dataset of scraped Twitter accounts of a number of leading evangelicals, Donald Trump, and a handful of other political figures that contained Tweets dating to as late as September 17, 2016 and to as early as December 13, 2008. The bulk of the Tweets in the dataset are dated to late 2015 and most of 2016—thus, most of the primary and general election season.

I utilized a method of sentiment analysis that relies on the NRC Emotion Lexicon to obtain positive and negative sentiment scores per Tweet and then used these scores to create a sentiment valence index score (SVI) per tweet, which ranged from 0 (most negative) to 100 (most positive). Positive and negative in this context does not mean like and dislike, but it refers to the number of positive and negative words in a given body of text. The analysis draws on a subset of Tweets with certain key words (“immigration,” “terrorism,” “Islam,” “Muslim,” and “Muslims”).

The sentiment for Tweets that mention immigration per evangelical leader and per Donald Trump is displayed below (Donald Trump’s Twitter handle is in red). Trump comes in with the 5th most negative score among the 11 Twitter users that mentioned immigration. Reverend Keven DeYoung and Wilfredo De Jesus (“Pastor Choco”) had the most positive sentiment, followed by Tony Perkins and Steve Strange. Meanwhile, Gary Bauer and Bill Hybels came in with the most negative sentiment of the group.

Overall, while Trump does seem to express, on average, less positive sentiment when Tweeting about immigration compared to several evangelical leaders, he appears to be squarely positioned among those who talked about immigration. 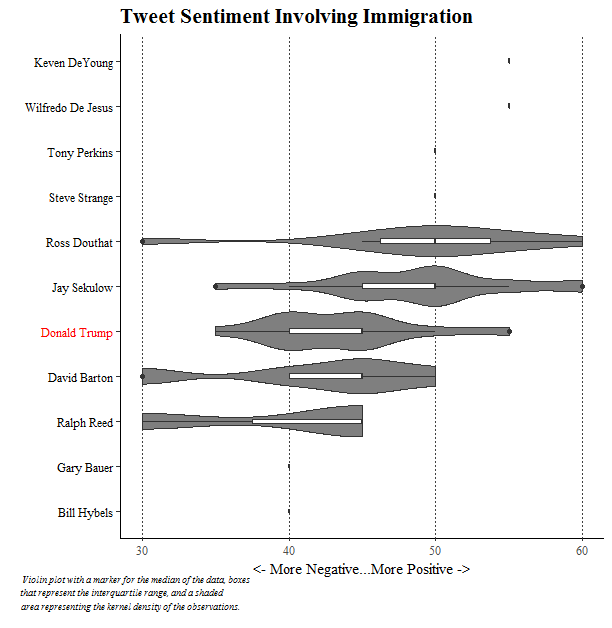 Of the 15 Twitter accounts in my sample that mentioned terrorism, Donald Trump’s ranks as the 6th most negative account. The average sentiment for fellow Republican and former governor and pastor, Mike Huckabee, matches Trump’s; however, Huckabee has only one Tweet in the whole sample that mention terrorism. The average SVI of Ted Cruz’s (Ted Cruz generally falls within the fold of evangelicals) Tweets is higher, but, like Mike Huckabee, Ted Cruz has only one Tweet that mentions terrorism.

The idea of positive Tweets that mention terrorism seems a bit odd, but the most positive Tweets that mention terrorism typically convey a sense of victory against terrorists rather than positive attitudes toward terrorist acts, such as this Tweet by Steve Strange: “We rejoice victory won against terrorism, but not that a man (no matter how evil) is dead. He had a soul but did know God.#FB.” Meanwhile, more negative Tweets tend to either mention particular attacks or blame the Obama administration for their perceived failure to adequately respond to terrorism.

A substantial number (33 in addition to Trump) of evangelicals elites on Twitter make at least some mention of Islam or Muslim(s). Among these, Trump has the 6th most negative set of Tweets. Ken Ham has the most positive sentiment, followed by Larry Stockstill, Ron Edmondson, and Kirk Cameron. Meanwhile, Pastor John Hagee has the most negative sentiment, followed by Pastor Eric Mason, Matt Chandler, Ralph Reed, and Ted Haggard.

Despite some overlap in sentiment regarding the above issues, it is not altogether clear from this analysis the precise degree to which evangelical leaders preferred Trump to Clinton in the period leading up to the November 8 election; though it does appear that many evangelical leaders at times expressed sentiment similar to what Trump expressed on this subset of issues. Moreover, a further comparison of the average sentiment of evangelical mentions of Trump vs. Clinton (not counting instances where both Trump and Clinton were mentioned together) shows that the sentiment for mentions of Trump was higher than for mentions of Clinton—the difference was not staggering (~47.3 SVI for Trump vs. ~46.2 SVI for Clinton); nevertheless, it was statistically significant.

In addition to expressing slightly more positive sentiment when mentioning Trump, evangelical leaders appeared to exclusively mention Trump (number of exclusive mentions = 786) with greater frequency than they exclusively mentioned Clinton (number of exclusive mentions = 375), which further may suggest Trump was a comparatively more salient topic of discussion among leading evangelicals during the primary and general election season as well.

Miles D. Williams is a graduate student who recently completed his Master’s degree at Eastern Illinois University in Charleston, Illinois. You can see more of his work on his portfolio.