The Religious Response to DACA’s End

On September 5, 2017 President Trump announced the impending end (in March 2018) of the Deferred Action for Childhood Arrivals program, whose beneficiaries have been called Dreamers. The response was swift, with protests breaking out around the country and numerous organizational leaders speaking out and voicing their opposition to this policy change.[1] How about religious groups? Were they as vocal? What did they say?

Djupe was teaching his religion and politics course right when this happened (fall 2017) and it seemed the perfect class project. So, he hastily put together a (non-comprehensive) list of a wide variety of religious organizations – denominations, religious traditions, and religious interest groups, both Christian and not – and had his students search diligently for statements from each group in September. It is entirely possible that we missed something, so if you have corrections please notify one of and we will update the list (include a URL of the statement, please).

Was making a statement tied in some fashion to the opinion of members? The 2016 CCES with its enormous sample (66k) helps us because we can attach many of these denominations to self-identified members. The survey was done before the DACA imbroglio so we cannot assess whether there was an effect, of course, but these data could tell us whether denominations were preaching to the choir. That’s what we expect, anyway.[2]

Of those with members over 50% in support of DACA, 42% of their denominations issued a statement on DACA in the fall of 2017. Of those with members under 50% support, 40% issued a statement on DACA. In both groups (those over and under 50%), statement making denominations had a bit higher support, but the results clearly do not tell us that denominations were preaching to the choir. And that’s surprising. There was potential for influence here, if people were actually exposed to the message (which is highly doubtful). Note the very high support of DACA from majority African-American denominations (with no statements made) and opposition (or lack of support given the measure) from members of mainline Protestant denominations. It’s surely no surprise that SBC support is so low, which reveals again the tensions between the membership and the leadership that sees the demographic future of the denomination in immigrants. 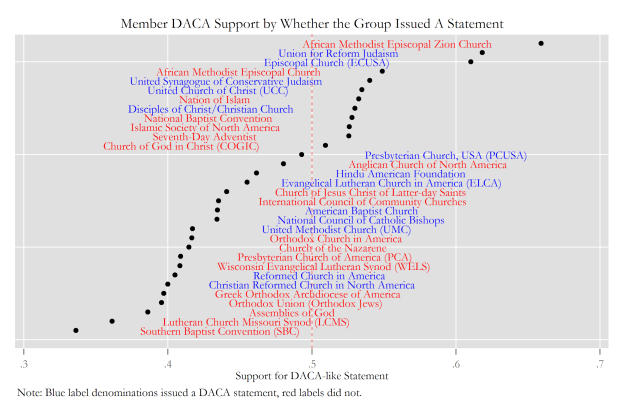 All of the statements made favored the DACA recipients, but the tone of their statements varied quite a bit according to a common sentiment dictionary (AFINN). The United Universalist Association [3] statement is rated the most positive and it is surely also the most strident. It has several mentions of “love” in it and here’s the context, “To all those directly affected by this decision, we recognize your humanity. You are part of the United States. We will defend your right to stay. We will continue to resist with you in the spirit of love and freedom.” On the other end of the range, it may seem odd to see the Mennonites as the most “negative,” but the statement is just less strident – there’s no mention of “love” in there. Here’s an example of the measured tone, “The president’s decision makes it even more imperative that Congress immediately pass the Dream Act to enshrine DACA protections into law for the hundreds of thousands who will soon be at risk of deportation, lost jobs, and separation from their families.” 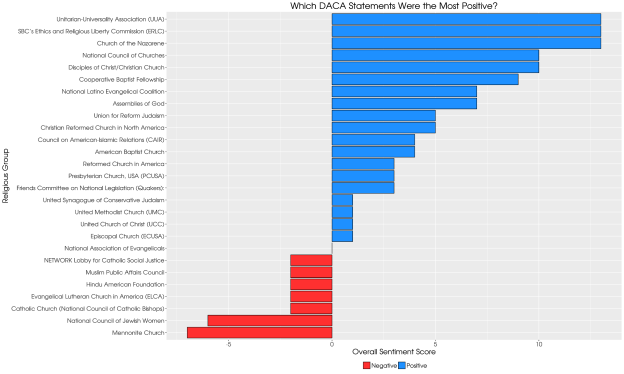 Not all of the statements mention Trump, but a minority do (shown below). MPAC and CAIR have multiple mentions of the President, the others just one. Does it matter? Yes, the statements that do not mention Trump have a much higher (positive) sentiment score than those that do. 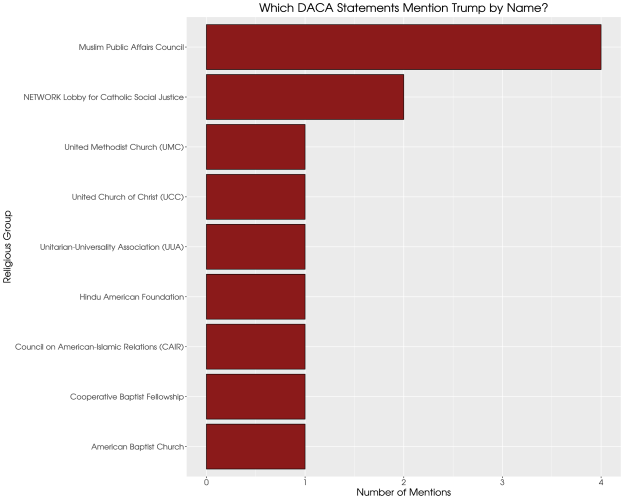 It’s helpful to see in a bit more detail how these statements talk about the DACA issue, which clearly balances the disruptive threats that the policy change entails for millions of Americans with the positive thoughts that these groups have for them. The threats are characterized with ‘risk’, ‘vulnerable’, ‘appalled’, and ‘lament.’ Note the problematic treatment of ‘undocumented’ and ‘stranger,’ which in this case is almost always used in the context of a bible verse from Matthew 25. The positive view of DACA recipients is expressed with ‘dignity’, ‘love’, and ‘decency.’

Djupe’s usual complaint is that we rarely have measures of religious communication to go with individual religiosity-style measures to provide some basis to claim religious influence. Well, here we have substantial documentation of what denomination officials said. Lots of questions follow. Did denominational clergy engage? Did they amplify or equivocate? What portion of members were exposed to any of these messages? Given usual church attendance rates, exposure was likely low if these messages were channeled through clergy (and that was minimal a few years ago). And other evangelical leaders have been quite negative about immigration (though not DACA specifically). But it is particularly intriguing that issuing a statement was not cleanly linked to prior support among group members. That leaves open the potential for influence and gives us a glimpse of prophetic American religion that otherwise appears in dramatic retreat given how partisans are reshuffling their religious behaviors and identities.

Ryan P. Burge teaches at Eastern Illinois University in Charleston, Illinois. He can be contacted via Twitter or his personal website. Full coding syntax for this analysis is available on my Github.

1. For instance, Denison’s president, Adam Weinberg, issued a statement, and EIU’s president sent out an email to the campus community, as well.

2. The question asked was strange, “What do you think the U.S. government should do about immigration? Select all that apply.” The third option was something close to DACA, “Grant legal status to people who were brought to the US illegally as children, but who have graduated from a U.S. high school.” It’s funny because participants do not weigh in on whether they agree or disagree with this statement, they are asked to select it if they agree with it. Some people are not going to read through all of the options closely, so not selecting it will include those who disagree and those who satisficed (weren’t paying close attention). That is, we expect support to be lower than expected.

3. The UUA, apparently, was rated as too small to list by name in the CCES, which is why it does not appear in the first figure.