How Does Christianity Affect Support for Environmental Protection?

By Amy Erica Smith and Paul A. Djupe

During this week surrounding Earth Day, the Interfaith Power and Light is urging clergy to observe Faith Climate Action Week. The group proclaims that “clergy, lay leaders, and other people of faith” around the United States “will speak of their abiding love for God’s Creation and concern about climate change. Our cause is more urgent than ever.” 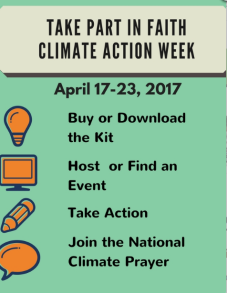 But what is the relationship between Christianity and support for the environment? At least since the writing of Genesis 1:26 [1], followers of Abrahamic religions have sought to understand their responsibility to the natural world. Rightfully or not, many academics have argued that Christian theology decreases people’s concern for the environment, as a consequence of what has come to be called the “dominion perspective.” That is, many read Genesis to mean that humanity has been granted the natural world to use for their benefit. This position was forcefully expressed in a 1967 article in Science in which Lynn White argued that, “Christianity made it possible to exploit nature in a mood of indifference…” (p.1205).

Still, this blanket description of Christian theology does not seem warranted. Take, for instance, this quote from a Brazilian Baptist one of us interviewed in a focus group in Brazil in 2014 [2]: “man was created to subdue the earth, but man subdued nature too much with his selfish thought, and that hurt the environment. We have dominion of the earth, seas, and heavens, but not with the care we should.” And in May 2015, Pope Francis—who took the name of a saint often associated with environmental protection—published his encyclical Laudato Si, urging renewed attention to “care for our common home.”

Academics debate what has come to be known as the “Lynn White Thesis.” The results are mixed, but generally find that religious values can support environmental action if followers understand their role as stewards rather than consumers of natural resources. In the United States, academics find that this attitude is much less common among evangelical Protestants, who have also been told that environmentalism is akin to worshipping a graven idol (or worse) by Christian Right leaders like the late Rev. Jerry Falwell. But much, if not quite all, of this work is situated in the United States, leading us to wonder if the patterns American exceptionalism governs this relationship. How is Christianity linked to environmental protection across the world?

The figure below takes a world-level view, analyzing responses in 44 countries with sizable populations of Christians.  The results confirm academic conclusions based on studying the United States alone. On average, across the globe, Christians express lower levels of support for environmental protection—especially those outside of Catholicism. The non-religious outpace religious groups in their support. Environmentalism also tends to decline with greater church attendance, especially among non-Catholic Christians. It is important not to make too much of these differences, though. The maximum differences amount to about 5 percentage points.

But how do results vary across the globe? Contrary to the settled wisdom among academics, we find tremendous cross-national variation in the relationship between religion and environmentalism. As the figure below shows, Catholics and non-Catholic Christians are more likely to support the environment than the non-religious in many countries. Catholicism has a statistically significant negative effect on support for the environment in eight countries, and a significant positive effect in four countries. Meanwhile, non-Catholic Christianity has a statistically significant negative effect in nine countries, and a positive one in seven others. (See note [3] for the list of countries.)

Just as interestingly, attending church boosts Christians’ support for the environment in many countries—the effect of church attendance is significant and negative in six countries, but significant and positive in seven others (see note [4]).

Why do Christians take such widely varying stances on the environment across the globe? Explaining the impact of Christianity on global environmental attitudes is a task for another day. The answer is surely related in part to how religious leaders help citizens interpret theology and understand the implications of theology for public issues. One thing is clear: fifty years after Lynn White argued that environmentally harmful worldviews were “almost universally held by Christians and neo-Christians,” we need a better explanation of how Christianity is related to environmentalism globally.

Amy Erica Smith is Visiting Fellow at the Kellogg Institute for International Studies, as well as Assistant Professor of Political Science at Iowa State University. Find more information about her here.

Paul A. Djupe, Denison University Political Science, is an affiliated scholar with PRRI, the series editor of Religious Engagement in Democratic Politics (Temple), and co-creator of religioninpublic.blog. Further information about his work can be found at his website and on Twitter.

Notes
1. Genesis 1:26, “Let Us make man in Our image, according to Our likeness; let them have dominion over the fish of the sea, over the birds of the air, and over the cattle, over all the earth and over every creeping thing that creeps on the earth” (NKJV).
2. Focus groups by Amy Erica Smith, as reported in book manuscript.
3. There are eight countries where Catholicism has a statistically significant negative effect (Australia, Colombia, Netherlands, New Zealand, Romania, Slovenia, South Africa, and Spain), and four where it has a statistically significant positive effect (Lebanon, Peru, Philippines, and Rwanda). There are nine countries where non-Catholic Christianity has a statistically significant negative effect (Estonia, Kyrgyzstan, Mexico, Netherlands, New Zealand, Singapore, South Africa, Sweden, and United States), and seven where it has a statistically significant positive effect (Belarus, Hong Kong, Kazakhstan, Lebanon, Malaysia, Philippines, and Rwanda).
4. There are six countries in which Christian church attendance significantly decreases support for the environment (Chile, Hong Kong, Malaysia, Nigeria, Russia, and Spain), and seven countries in which it increases support for the environment (Ecuador, Georgia, South Korea, Peru, Philippines, Slovenia, South Africa).