(Photo credit: ERLC. Here the Southern Baptist Convention passes a resolution to repudiate the Confederate Flag at its 2016 annual meeting)

Observers have long noted the importance of religion to American democracy. Religion acted as an agent of socialization, both restraining moral experimentation and encouraging the promotion and defense of worldviews and group interests. It is no surprise that James Madison in Federalist 10 and 51 analogized the pluralism of American religion to political pluralism.

What they did not note was the importance of American denominational religion. The following figures come from Ed Stetzer, holder of the Billy Graham Chair of Church, Mission, and Evangelism at Wheaton College and long an observer of American religion. The lesson is clear. In addition to the long term decline of Mainline Protestant denominations, who have gone from 20% to about 10% of the population in the last 3 decades, the composition of evangelical Protestantism is shifting. Though evangelicalism has long been a diverse collection of groups, the importance of non-denominational churches is growing. Stetzer laments this shift for its importance to mission, but I see troubles ahead in our democratic politics.

Denominations are important to democratic politics in at least three ways. I am not writing about congregations here – how they promote democracy is well-trod ground (see e.g., Djupe and Gilbert 2009; Leege 1988; Verba Scholzman, and Brady 1995; among many others). So I am focused on the idea of why national networks of congregations would be important.[1]

Denominations, both hierarchically organized (Lutherans and Presbyterians) and loosely organized ones (United Church of Christ and Assemblies of God), take positions on issues of the day and encourage their member churches to devote time discussing those issues. Denominations help to solve the collective action problem of political organizing by dedicating staff positions at the supra-congregational level to this task. Those staff positions are only made possible by the pooling of resources across many congregations. At the same time, those supra-congregational staff positions dedicated to political organizing are more effective because of their links to individual congregations. Denominations help build those links by issuing packets of materials or at least talking points and questions to facilitate that discussion (see, for instance, the ELCA on earth day).[2] And these national linkages are reasonably effective in promoting policy diffusion (Djupe and Olson 2010).

Common conversations are not just encouraged by denominational leadership, but also result from conflict. The ELCA’s acceptance of openly gay clergy in committed relationships sparked a great deal of conversation, some of it quite heated (Djupe and Olson 2013). But this was also an opportunity for (more or less) constructive democratic deliberation. That is, clergy in denominational churches are often invested in maintaining the denomination, which is linked to a healthy congregation built on mutual respect.

Indeed, congregations are much more diverse than we generally give them credit for (see Ryan Burge’s post on the ABCUSA). And that division is magnified across a denomination. While disagreement is a persistent organizational problem – the ELCA is thought to have lost about 10% of affiliated congregations in the wake of that vote – it also represents an opportunity to practice democratic norms of mutual respect for those who take different positions at both the congregational and denominational levels (see Wood and Bloch 1995). Clergy widely support democratic norms, and adopt them primarily in adult education sessions. Important to this argument, non-denominational churches are far less likely than denominational churches to host adult education on social and political issues, as Table 1 below shows (taken from Neiheisel, Djupe and Sokhey 2009). 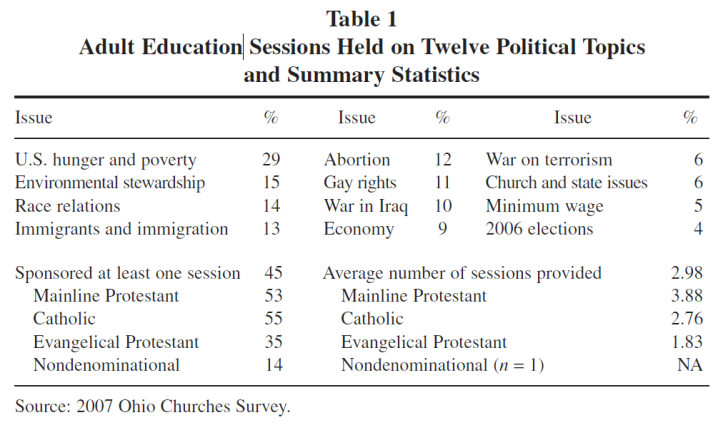 Lastly, given their scope covering nations and sometimes crossing international boundaries, denominations also promote thinking about collective interests. Where else in American religion do you see frequent reference to “discernment” but in denominational statements? Of course, discernment may not result in respecting collective interests, but they are often taken into account (see this as an example in the PC(USA)). What is more important is the analogy to political process – discernment processes ask participants to carefully and thoughtfully walk through a set of questions that weigh collective and individual interests.

We see the valuation of collective interests most clearly regarding the environment. While evangelicals were late to the environmental protection game, it is notable that most denominations now have pro-environmental statements. The National Association of Evangelicals, pushed by Rev. Rich Cizik, adopted a much more progressive set of statements in 2003 that included support for action to reverse climate change. This was effective in moving evangelical opinion (Djupe and Gwiasda 2010). Note in the figure below using data from the 2016 CCES that non-denominational Protestants have the lowest mean score of support for environmental protection.

The same sort of dynamics can be seen with respect to immigration as well. Denominations are more likely to make tough, even unpopular choices out of a concern for the organization.  The Southern Baptist Convention, for instance, would be declining in total membership were it not for growth among Hispanics. However, the members in the pews are not entirely on board with that. Nevertheless, non-denominational Protestants are among the lowest supporters of a more welcoming immigration policy (data also taken from the 2016 CCES) and have no central organization to pose counter-arguments.

These dynamics are not limited to American religion. There is nothing particularly novel in the argument that a widespread decline in large, federated organizations across the US makes it increasingly difficult to mobilize communities to solve larger, civic problems, have difficult conversations across lines of difference, and make contact with people from different walks of life.

As many institutions of civic life have declined in in the United States the past few decades, partisan polarization and mobilization have risen. This may not be a coincidence. Civic institutions have historically provided regular forums for civil interaction with people across partisan and ideological lines within a community. Denominational deliberation could serve to slow partisan polarization. Thus, the decline in denominationalism is troubling because denominations are not serving as counterweights to party mobilization. That’s what makes the following figure particularly worrisome. In the absence of contact with denominational leaders, members of non-denominational churches are instead mobilized by political parties at much higher rates than other evangelicals (such as Baptists).

Paul A. Djupe, Denison University Political Science, is an affiliated scholar with PRRI, the series editor of Religious Engagement in Democratic Politics (Temple), and co-creator of religioninpublic.blog. Further information about his work can be found at his website and on Twitter.

1. In addition, the orthodox Madisonian pluralist would think the major import of denominationalism is that it spreads ingroup loyalty and fosters outgroup suspicion, undermining majorities and maintaining a vigorous system of social checks on faction. This role for Christian denominationalism in the U.S. is so denuded by this point, though, that it is probably not worth mentioning anymore. Americans are divided on whether simple belief in God is necessary to be a good, moral person, and pollsters don’t even ask Presbyterians, for instance, whether being a Presbyterian is necessary to be a good person.

2. Some portion of non-denominational churches have joined loose networks that are often formed by successful churches. For instance, the Willow Creek Association (formed around Willow Creek Church in suburban Chicago) “is committed to the singular idea that inspired, encouraged and equipped Christian leaders transform their communities.” It does more than this (there’s a newsletter and blog), but its focus is their long running, yearly Global Leadership Summit. This is clearly not the same thing as a traditional Christian denomination.

Wood, James R. and Jon P. Bloch. 1995. “The Role of Church Assemblies in Building a Civil Society: The Case of the United Methodist General Conference’s Debate on Homosexuality.” Sociology of Religion 56: 121-136.