Is College Bad for Religion? How Religion Fares at Denison

[Note: This post originally appeared at onetwentysevenweb.wordpress.com – a blog dedicated to data journalism about and for Denison University that I run with some really talented students.]

College is meant to be a time of exploration. Especially on a residential campus where you are invited to become discerning moral agents, it is imperative to try on, or at least argue from, a variety of ethical and logical perspectives. Combined with the diversity of the college community that you are encouraged to get to know, it would be easy to assume that religion, just like those Justin Bieber posters, would be confined to childhood and would no longer be part of the college-you. But, at 127 we don’t assume, we go to the data. Is Denison corrosive to religion?

Using data from our March survey of the student body (N~580), we can get a clear view of religion at Denison — what traditions individuals identify with, how strongly they see religion in their lives, and how those identities intersect with their social contexts. It is no surprise to me that religion is responsive to the social context, but it works in ways you might not think likely.

The Denison student body features a very high level of the non-religious. Almost thirty percent call themselves atheist or agnostic and another 15 percent say they are “nothing in particular.” Taken together, these figures are not far off the American age 18-24 population (as captured in the 2016 CCES) which is about 41.5 percent atheist/agnostic or nothing in particular. 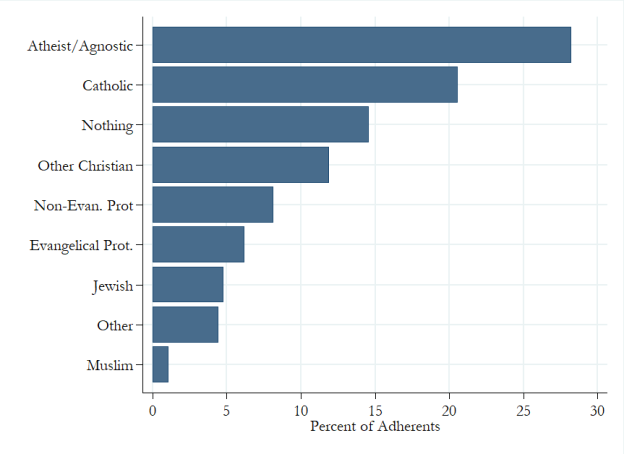 There’s a good reason why religions are organized into social units, like congregations — social support is a critical resource for individuals and a way to maintain the collective faith and identity. We asked this in a particular way that seems to work well with Denison’s diverse community: “How well do people you are close to on campus know the answer you just gave about your religious identity?” Having someone know you and accept you seems like it would be critical to maintaining that identity. Responses vary quite a bit across the religious traditions on campus, with the Jewish community the clear stand out. This is no surprise given the intentionality with which Jews have organized to preserve the faith through Hillel. While other religious groups have a presence on campus, such as the Catholic Newman Association, most do not have a dedicated group and it shows here in the figure below with relatively meager levels of understanding perceived in student social circles.

One could easily spin a story where the diverse college environment chips away at a religious identity over time, but there’s really no evidence for it here or elsewhere (or elsewhere). Religious importance (“How important is religion in guiding your life?”) is stable across class years. And social understanding (as in the graph above) actually grows across class years (by about 10%) as students sort themselves out and develop their support networks.

In this way, religion is a lot like partisanship. There’s no evidence at Denison that college “eats conservative brains” either. This is not to say that partisanship doesn’t enter the equation — I am a political scientist after all. Given the deeply polarized sentiments about the candidates running for President in 2016, we decided to ask students to estimate how supportive of Donald Trump their home congregation is. Those results, spread over the partisan identity of the student, are shown below. Clearly, there are many Democrats who were attending congregations that had substantial support for Trump and there were Republicans who attended congregations with rather anemic Trump support (my impression is that Denison Republicans are not enamored with Trump, so let’s be careful about equating the party and Trump on campus). Does this partisan mismatch affect how students report their attachment to religion now? 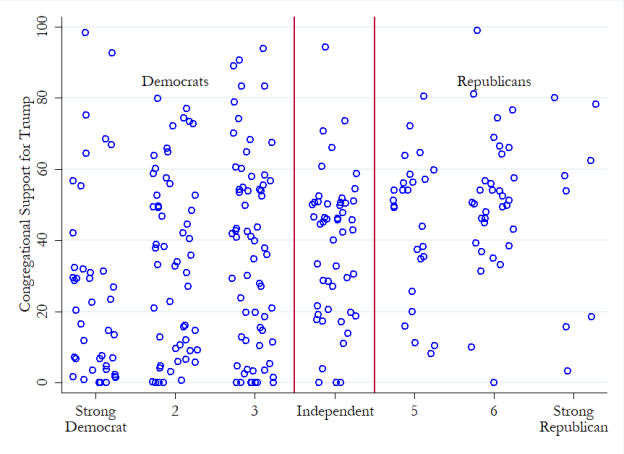 The answer is a qualified “yes” as the figure below shows. Republicans appear to increase (though not significantly) their sense of religious importance the more that their congregation matches their partisan slant (represented through Trump). And Democrats (and others) react negatively to Trump support. Once perceived Trump support in the congregation passes a majority threshold, their expressed religious importance declines rapidly — the full decline is 25% of the scale. This closely matches evidence that I’ve found (with my buds Anand and Jake) out in society, that political disagreement in church weakens attendance and can even undercut attachment to the congregation itself. 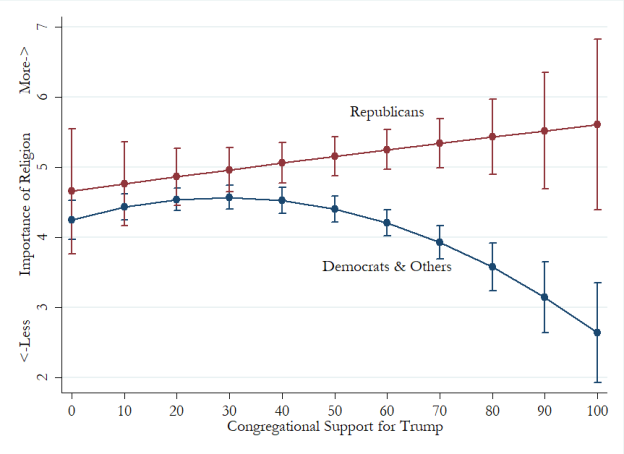 One way to read these results is to decry the role of politics in civic life and clutch our pearls about the growing polarization in American society. But, it’s inevitable that people are going to sort themselves out a bit so that the disagreement they face is not overwhelming. If you look at the graph just above again, note that Democrats don’t start to deemphasize their religious identity until Trump support around them is very high. Denison students are not snowflakes and tolerance for diverse perspectives actually runs pretty high. Moreover, Denison appears to be a pretty safe space in which to explore your commitments. We’ve looked hard and really haven’t found any of these critical identities eroding across 127 credits (four years of study). Instead, as the last analysis shows, students are starting to sort themselves out relative to their upbringing. While that may generate some tension at Thanksgiving, this appears to be more a function of social distance and new found liberty rather than social coercion on campus.