Does Beto Have a Chance with White Evangelicals?

This week, the New York Times published a story about the Senate race in Texas, which features a close contest between the incumbent Republican Ted Cruz and his Democrat challenger, Beto O’Rourke. The article, “Beto O’Rourke May Benefit From an Unlikely Support Group: White Evangelical Women” written by Elizabeth Dias, argues that because of a number of sexist comments and the nomination and confirmation of alleged sexual predator Brett Kavanaugh, evangelical women have defected from the GOP and are willing to cast their ballot for O’Rourke. Dias quotes white, female, evangelical voters who note that they care about children being separated from their parents as they cross the southern border seeking asylum. What does the data say? I obviously don’t have any real-time polling of the Texas Senate race, but I do have some data from the 2016 election that allows us to speculate.

The obvious place to start is the vote choice of white, evangelical, women in 2016. The above graph displays how well each candidate did in Texas among this subgroup, as well as how white, evangelical, women voted in the entire country. It should come as no surprise that Trump did very well among both groups. In fact, Trump beat the national average in Texas, garnering the votes of three out of four white, evangelical, women. That’s just slightly above the national average of 65%. Things may have obviously shifted fairly dramatically given recent political events, but suffice it to say that Texas evangelicals can be considered a general stronghold of the GOP establishment and it would take quite a bit of movement to give this bloc over to Beto O’Rourke in 2018.

Speaking more generally about the demographic makeup of Texas, the first thing that jumps out is that Texas is fairly racially diverse considering that it has been consistently a red state in its voting patterns. I wanted to take a look at the racial makeup of each county in Texas and I used the U.S. Census Bureau’s American Community Survey to do so. The map above displays the percent of each county that is white as brighter yellow. It’s clear that those counties that are close to the border are significantly more Hispanic, with white Texans being found primarily toward the panhandle and up in the northeast portion of the state.

The map of racial demography in Texas is fascinating when compared to the religious breakdown of Texas counties. The map above displays the percentage of respondents who were evangelical. This data comes from the 2010 Religious Census. Overall, 23.9% of Texans identify as evangelicals, which is slightly above the national average of 20.7%. Note how those same counties that have lower numbers of white people are also counties with fewer evangelicals in them. While evangelicalism is diverse, it’s still primarily a white religion and that bears out in Texas especially. 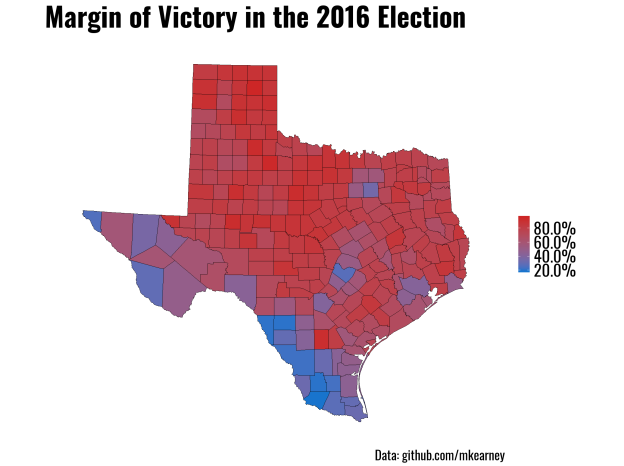 How do all these things come together? The above maps gives the difference between Trump’s vote share and Clinton’s vote share. You can almost lay this map over the prior two and see a direct relationship: the GOP does better in the whiter and more evangelical counties, while Democrats can run up the score in border counties that have more racial minorities (and few people). The scatterplot below visualizes the relationship between the percent of evangelicals in a county and that county’s vote in 2016. The size of the points represent the total population of that county. There is clearly a positive relationship between these two factors, but it’s important to keep the size of the county in mind. Hillary Clinton enjoyed her strongest support in the large counties. Of the largest ten counties in Texas, seven of them went for the Democrat. Trump won ten counties by at least eighty points, but none of those had a total population of more than 6000 people. 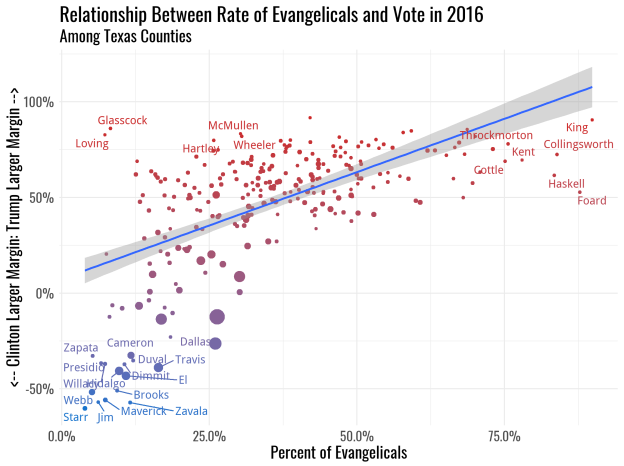 This data is obviously not incredibly predictive because a lot can happen in two years. It’s sensible to assume that when circumstances change so will voting patterns, but the past few years have lead us to question a great deal of conventional wisdom. For instance, in a post I wrote with Djupe, we find that the more warmly people who frequently attend church feel toward minorities the more warmly they feel toward Donald Trump. While many of these white, evangelical, women in Texas may be appalled by Trump’s positions on many issues, when they go to the ballot box next month they will still pull the lever for Ted Cruz, the GOP candidate.