By Paul A. Djupe and Jacob R. Neiheisel

Just in time for the midterm elections, The New York Times published a piece from Katherine Stewart that argues, “All over the country…it’s all but impossible to separate pastors from political operatives, parties from houses of worship, and the redemptive messages of theology from the slogans of partisan placards.”

That’s a strident claim, to say the least. We’re going to continue the process of unraveling her claims by focusing in this piece on how extensively churches engage in political action and why. This is not nearly the only way in which politics can be found in congregations in the US, but it’s a start. Is it possible to differentiate parties from houses of worship? Are congregations just elements of the parties’ get out the vote (GOTV) efforts?

In our forthcoming article in Politics & Religion, we present a wide range of evidence to indicate that GOTV efforts on the part of churches are not widespread. Moreover, our results do not nearly indicate that congregations are activated by the political strategy of the election season, though politics do play some role. We used data from around the year 2000 when religion and politics were hotly entwined, evangelicals had just pressed for the impeachment of Bill Clinton and were joyous about the presidential candidate whose favorite political philosopher was Jesus (George W. Bush). The National Congregations Study (NCS) and the US Congregational Life Study (USCLS), available at ARDA, present us with a range of great data with which to study the political engagement of congregations. We also pair them with the 2000 Religious Census data for a more holistic picture of how the religious environment may affect the provision of “political goods” in congregations. So, yes, the data are old and it might look different now.

The Distribution of Congregational Political Activism Across Religious Traditions 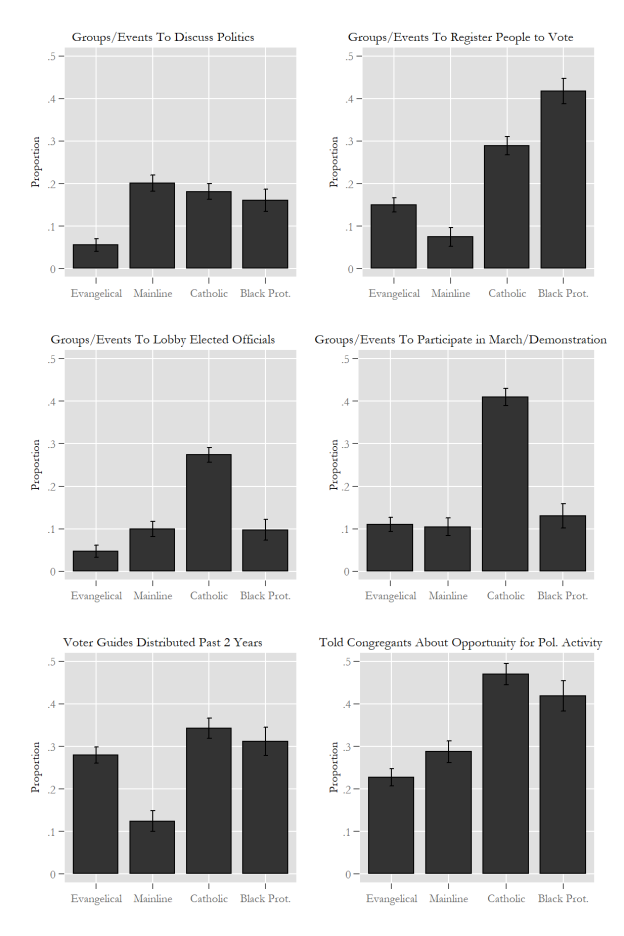 The key question is why do congregations do more or less of these activities? Our theory follows the religious economies approach, in which religious entrepreneurs (clergy) offer religious goods in the marketplace to build, expand, and protect the franchise (congregation). Some offerings are more successful than others, and all combine some mix of pressing for inclusion of new attendees and efforts to keep existing members in place.

From this perspective, we see political activities as one potential benefit offered to members. Since engaging in politics can expose divisions in a group, we suspect that they are not the first benefit offered, but most often the last. This strategy ensures that members have a wide variety of other bases on which to sustain their membership and can choose political engagement if they want.

Let’s look at the evidence. The figure below shows how offering political activities (in this case voter registration efforts) are linked to offering other ‘services’ in the congregation (e.g., counseling, bible study, custodial groups, youth, sports, etc.). The rate of voter registration activity hosted by the church climbs steadily as the congregation is more programmatic. The same pattern is seen when we use the political activity index and the other dataset (NCS). 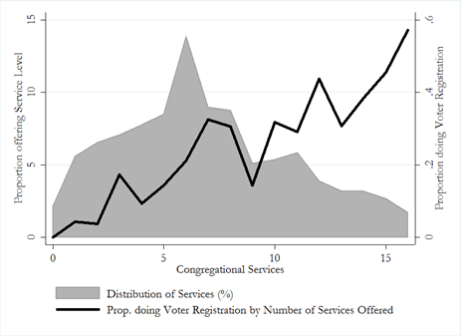 Since the religious economies approach concerns offering products in the public marketplace, we have expectations about when it would make sense for politics to appear. The stereotype is probably still that liberal churches are more engaged with the community while conservatives are not. The figure below shows theological conservatives and liberals engage in political activities depending on the marketshare of the group. Liberals and conservatives play to the brand when they are isolated in the community – liberals are more engaged, conservatives less – but they become indistinguishable when marketshare is high and they differentiate their services in a wide variety of ways to stand out from similar congregations. 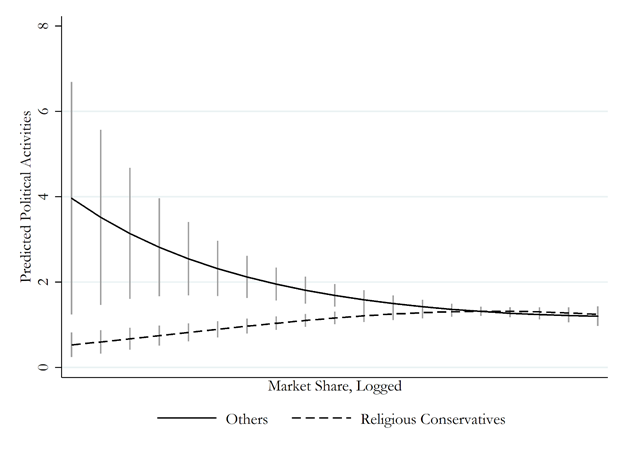 This is not to say that political engagement is detached from politics. Clearly, parties and interest groups have tried to work with congregations for a long time and sizable minorities in these religious traditions have made voter guides available, for instance. In fact, the partisan cast of the county of the congregation does have effects on political services, but those effects depend on the religious tradition. 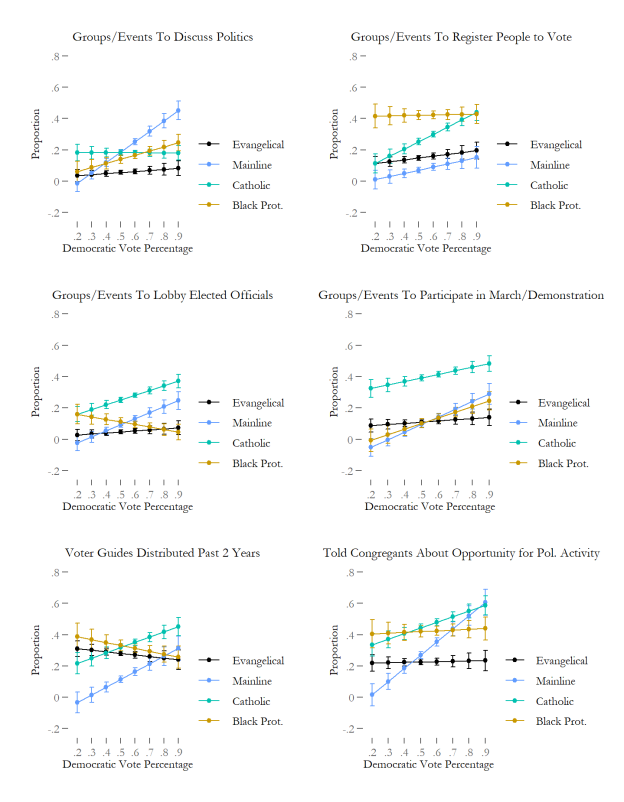 It’s rather striking how little change is in evidence among evangelical Protestants across the different types of political activities in which churches might engage. Throughout the range of the Democratic vote in the surrounding county, the predicted proportion of evangelical churches taking part in a host of political acts is essentially flat. Mainline Protestants, by contrast, increase their level of political activity as the Democratic vote percentage at the county level increases. The same is true for Catholics except when it comes to hosting groups dedicated to fostering political talk in church.

The relationship between Democratic vote share and political activity is much more inconsistent in the black church, as it is positively related to the provision of groups convened for the purpose of discussing politics and events geared toward participation in marches or demonstrations, negative when it comes to political activities (such as voter guide distribution or events held for the purpose of lobbying elected officials), and appears to bear no relationship at all with still others. Taken together, the overall patterns complicate popular narratives that paint churches and other houses as inseparable from partisan politics.

Overall, political engagement in congregations is not high. One of the reasons why is that clergy are wary of bringing political division to the fore and hence only appear to encourage explicit political action when the church is highly programmed. Congregations engage politics in brand consistent ways when they are isolated, but break those molds when they have to compete for members with similar congregations. And some congregations are responsive to the political environment, probably as a reflection of popular interest (liberals typically want engagement, conservatives less so), but perhaps also as a result of partisan mobilization.

We’ve made the argument elsewhere that, for instance, “evangelicals were on their own” in the 2016 election (Djupe and Calfano 2018); that evangelical clergy could have made some difference to the Trump vote, but mostly remained silent as we know is their right. This makes sense from the perspective of our religious economies work – politics consistently has the ability to drive members to leave congregations. The upshot, though, is that religious influence and authority decline as a result.

Jake Neiheisel is an Associate Professor of Political Science at the University at Buffalo, SUNY. Further information about his work can be found at his website and on Twitter.