In addition to weekly Sunday worship services in neighborhood churches, devout Latter-day Saints also frequently participate in religious ceremonies that take place in the 160 temples scattered throughout the world. Temples are reserved for special ceremonies including baptisms for the dead, endowment ceremonies, and eternal marriage sealings. (More information about LDS temples is available here.)

The LDS temple endowment ceremony was introduced in 1842 by Joseph Smith who  combined Freemason ritual with LDS-specific doctrines and teachings. While the endowment has changed and developed extensively since its inception, the broad contours remain largely the same: participants are presented with a liturgical reenactment of the creation of the world and humanity, the Garden of Eden, and God’s establishment of a covenant relationship with Adam and Eve after their expulsion from the Garden. Collectively, this liturgical reenactment is meant to metaphorically represent God’s covenant relationship with all of humanity that enables them to return to the presence of God in the afterlife. 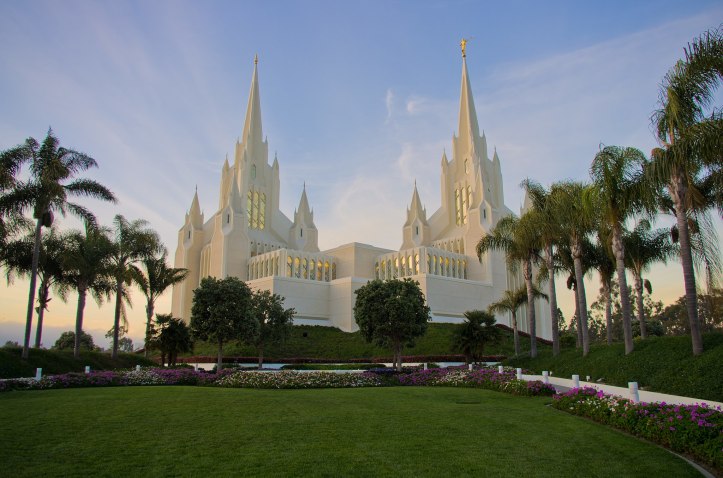 Until very recently, the endowment liturgy included extensive references to traditional gender roles, including Adam’s prominence over Eve in these covenant relationships and Eve’s curse of painful childbearing for eating the forbidden fruit. Perhaps most importantly, Eve’s covenants to God were made only through Adam, while Adam’s were made directly to God.

Starting the first week of January 2019, however, temple-going Latter-day Saints found that the endowment liturgy had been extensively revised to eliminate nearly all references to traditional gender roles, elevate the role of Eve in the ceremony to be equal to that of Adam, and to give Eve a much more prominent role in the endowment liturgy.

Responses so far among LDS faithful have been largely positive. For their part, many LDS feminists are praising the revisions while also mourning that so many have not had the opportunity to experience this new and more empowering version of the endowment ceremony.

In the long-run, it is possible that these revisions will result in more egalitarian attitudes among Latter-day Saints when it comes to gender roles and possibly even changes to the Church’s male-only priesthood governance structure.

All kinds of research has shown that role models matter in shaping the attitudes, behavior, and well-being of individuals. Gender makes an important difference: boys and girls both tend to look up to same-gender adults in their lives to learn how to perform their own gender roles. Other research has shown that boys and young men are particularly responsive to powerful role models regardless of gender while girls and young women tend to be more responsive only to female role models, whether those women are in high-power or low-power roles. My own research has shown that when young women and girls see female congregational leaders in their religious communities, they grow up to to have higher levels of self-esteem, self-confidence, as well as higher levels of education and employment.

Based on this research, it is reasonable to predict that the recent endowment ceremony revisions will have similar effects on temple-going Latter-day Saints. These temple ceremonies are strongly reverenced and often inform (both formally and informally) all kinds of values, beliefs, and morals among Latter-day Saints. They are taught to look to Adam and Eve in the temple narratives both as the literal parents of humanity as well as archetypal models of the appropriate roles for men and women and relationships between themselves, their families, and God. The pre-2019 LDS endowment liturgy, which strongly reinforced traditional gender roles and the subordinate role of Eve, may have been part of the explanation for the strong persistence of traditional gender roles among contemporary Latter-day Saints in the early 21st century.

We can test this hypothesis with the 2016 Next Mormons Survey (NMS). This survey, directed by Jana Riess and me, asked more than 1,100 American Latter-day Saints whether they had participated in the temple endowment ceremony and also their views on gender roles, including appropriate roles for men and women in marriages as well as whether they believe that God’s priesthood authority is reserved only for men (full survey details and methodology available here).

In terms of marriage norms, 61% of American Latter-day Saints in the NMS say that the more ideal marriage is one where “the husband provides for the family and the wife takes care of the house and children” while the other 39% say that it is “one where the husband and wife both have jobs and both take care of the house and children.” There is a small, but statistically significant difference between Latter-day Saint men and women on this question, with 65% of men but only 58% of women preferred the traditional arrangement.

Of course, those who participate in LDS temple ceremonies are also likely to be religiously devout and perhaps older and more politically conservative as well, all of which could also account for this difference. We can examine the independent effect of the endowment ceremony, though, with a statistical multivariate regression analysis that simultaneously controls for standard demographic factors including gender, age, education levels, income, race/ethnicity, living inside/outside of Utah, as well as political partisanship and frequency of church attendance. Taking these various factors into account, participating in the endowment ceremony still increases the difference in gender marriage roles preferences by 20%:

Findings from the Next Mormons Survey also suggest that participation in the endowment ceremony affects attitudes toward gender roles and ecclesiastical leadership in the LDS Church.

While there are no remarkable differences on this question when it comes to gender, three-quarters (75%) of those who have participated in the endowment ceremony believe or have faith that a male-only priesthood is God’s will compared to only 58% among those who have not participated.

A closer analysis of the effect of the endowment on priesthood opinions, taking into account the same demographic, political, and religious control variables described above, reveals that the endowment matters more for women than for men on this question:

This strongly suggests that the specifics of the endowment liturgy, including the language that emphasizes traditional gender roles and the prominence of Adam over Eve in establishing divine covenants, are a major factor in driving American Latter-day Saints toward more traditional views on gender roles both in marriage and church governance. This is likely due to the strong “role model” effects that Adam and Eve have in the LDS temple endowment liturgy, which are internalized by devout Latter-day Saints.

As described above, however, the endowment liturgy was extensively revised in January 2019 to remove most references to patriarchal gender language, to give Eve a much more prominent and vocal role in the ceremony, and to equalize Eve’s covenant-making role to the same status as Adam’s.

Based on the research presented above, it is likely that change will lead to a gradual shift toward much more egalitarian gender norms among Latter-day Saints. This may especially be the case as a younger generation rises who will only ever see Adam and Eve portrayed as equals in the LDS endowment ceremony.

This may also have a strong impact on Latter-day Saint views toward gender and church governance. As discussed above, the previous endowment ceremony boosted support for the Church’s male-only priesthood structure by more than 30% among LDS women. How will an endowment narrative that puts Adam and Eve on more equal footing in terms of covenants and importance affect LDS women’s attitudes toward the existing male-only priesthood church leadership structure?