Religious and Political Conflict at the State Level

Given the anti-democratic outcomes of 40% of the presidential elections in this century (i.e., the popular vote lost), we probably do not need a reminder that the states matter and that federalism is alive and well in the modern US. So, while we tend to look at individual variation in public opinion, it is quite useful sometimes to see how individual attributes and opinions aggregate into state patterns. The other day we looked at how state religious and political distributions appear to drive the concentration of LGB Americans. Today we thought we would look at the coincidence of the religious and non-religious from several angles to see how that admixture might lead to a politics that reflects cultural conflict. As an increasing number of others are finding, we find evidence for an asymmetric culture war.

It would be almost inconceivable several decades ago to consider that non-attenders might outnumber regular attenders, but it’s commonplace now. The figure below shows just that using 2016 CCES data, color coded by which presidential candidate carried the state. It is quite striking to see that a majority of states have more non-attenders than weekly attenders. And the partisan pattern is asymmetric – about ⅓ of states left of zero (more non-attenders) were carried by Trump, while only 1 /19 of those right of center (more attenders) was carried by Clinton.

Just to confirm what we know to be true, religion is concentrated in the usual suspect states. Religious importance is low in the Northeast and West, especially the Pacific Northwest, and it is especially high in the South and Northern Plains. This pattern largely overlaps with the partisan divide as well, since the Northeast and West went strongly for Clinton in 2016 and for Democrats in 2018, while the South and plains states went for Trump. The midwest was divided in the last few years, leaning Republican in 2016 and Democratic in 2018.

Perhaps the most appropriate measures focused on social and political conflict would be the religious nones and the proportion of the population that identifies as evangelical or born again (in the figure below, the evangelical/born-again measure includes anyone who identifies and sizeable numbers are black). Simply put, having higher rates of nones is no guarantee that the state is Democratic, but higher proportions of evangelical/born again voters makes a Republican lean much more likely. The trend line among blue states is statistically flat, while the trend among red states is pronounced and negative.

Of course, one of the reasons for the lack of a relationship among the blue states is that they have a variety of religious configurations. Yes, some conform to the stereotype that Democrats are nones, especially those in the Northeast and Northwest. But then there are heavily Catholic states like New Mexico, New York, New Jersey, and Connecticut that complicate the pattern. But these exceptions confirm an emerging rule that Democrats are more pluralistic than Republicans, which also reinforces the demographic problems the Republican Party faces (see, e.g., Robby Jones’ book, The End of White Christian America). 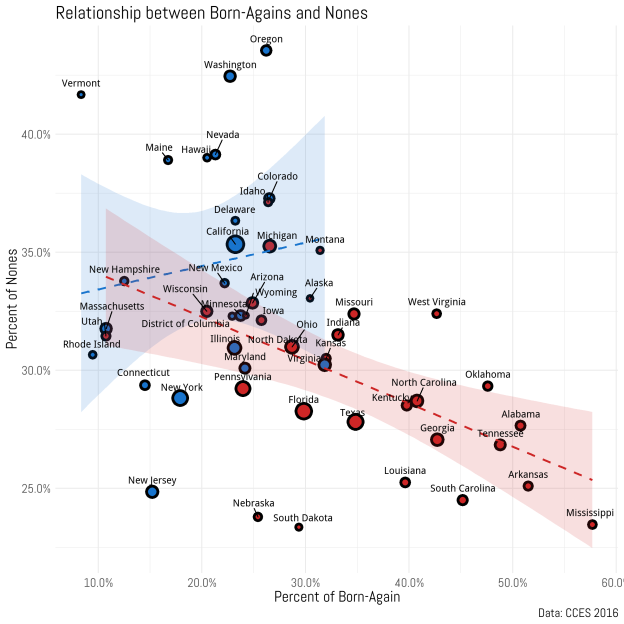 It’s instructive to see just how these proportions have changed in the last dozen years as viewed through the CCES lens. There are still surely some anomalous readings from states with smaller samples (e.g., Nebraska is moving quite a lot on the x axis that surely belies reality), but the enormous sample sizes in these surveys gives us a phenomenal impression of state-level change. And that change in the population of nones is enormous and fast. Even Alabama gains about 15 percentage points more nones in this period, while Oregon gains about 20 percentage points. The graph also appears to confirm a finding from Djupe, Neiheisel, and Conger (2018) that nones have increased in evangelical states to help close the gap with less evangelical states. A YouTube video of the animation is here.

We thought we would take a new tack to discern the political implications of the co-presence of these two groups at odds over so many hot button debates. We turned to data that Kim Conger (University of Cincinnati) has been collecting for many years now. In several presidential election years, Kim surveyed elite observers in the states to gain their assessments of the presence and power of the Christian Right (adding the Christian left in recent iterations). She generously shared her 2016 estimates with us. We suspected that when the fuel for the Christian Right – evangelical identifiers – was present in high numbers, they would be linked to stronger assessments of Christian Right influence when more nones were present as well. Consider more nones to be the fire added to the evangelical fuel.

The figure below shows that interaction. More born-again, evangelical identifiers boost the Christian Right presence/influence in the state, a relationship which is intensified by a higher than average rate of nones. The effect of a 2 standard deviation swing is to move Christian Right influence about 25% of the scale – a sizeable effect. In this way, the results showcase how the Christian Right is about representation of a constituency in reaction to forces challenging their privileged position in society and a rapidly fading set of social arrangements. 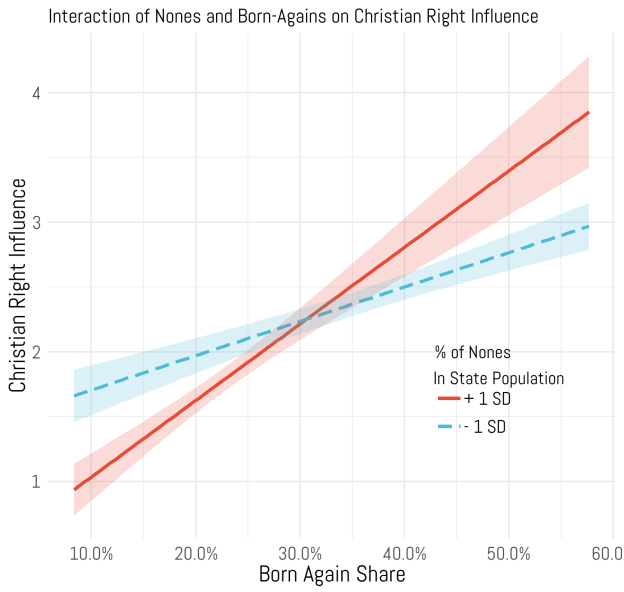 It is conventional wisdom that Republican politics are the politics of reaction, fueled by the threat to white (conservative) Christian America (e.g., Burleigh 2018). Nones are not organized enough and not motivated enough by conservative Christians to react in the same ways (a paper about perceptions of the composition of the parties with Ryan Claassen, Andy Lewis, and Jake Neiheisel suggests the same thing). This leaves us with an asymmetric pattern of conflict, with the Democrats catering to a diverse set of policy concerns and Republicans largely playing to one set of particularistic concerns. The demographic changes are continuing such that this will soon be an untenable strategy.