Can You Be Gay and Be an Evangelical?

Almost every American is pulled in multiple directions when they enter the voting booth. There are hunters who are strongly in favor of unlimited Second Amendment rights but are also very much in favor of environmental protection to allow them to continue to hunt deer and ducks. There are union ironworkers who want to wrest power away from their bosses, but also attend Catholic Mass each Sunday and are staunchly anti-abortion. Some small business owners love that the U.S. has a lower number of business regulations, but really want to see a more regulated health insurance market. Hardly anyone holds consistently conservative or consistently liberal opinions. In fact, we are all over the place ideological.

This general idea is called being “cross-pressured.” Picture someone being pushed to the political left on one issue, but then drug back to the right on another one. Cross pressures are everywhere in the religious world. For instance, vast swaths of Catholics use birth control despite the fact that Church is opposed to this type of family planning. Another area where people are openly conflicted is between their religious beliefs and their sexual orientation. Over half of evangelicals opposed the legalization of same sex marriage in 2016. They are the only religious group in which a majority disagree with gay marriage. So, given this relatively strong opposition, can someone be evangelical and be gay? For the first time ever, a random sample of sufficient size has been made available to try and understand the demographics and political outlook of LGB evangelicals. Do they think like evangelicals or like those in the gay community?

The graph below looks at religion from its most broad perspective, asking respondents how important religion is in their daily lives with response options ranging from “not at all important” to “very important.” Note that this question is about as generic as possible and therefore shouldn’t be biased against any type of religious expression, however those with no faith will likely score lower. It’s clear that evangelicals are highly religious, with seven in ten saying that religion is very important in their lives. LGB evangelicals do not lag far behind, with 53% saying “very important” compared to 27.8% from non-evangelical LGB. The left side of the graph is also instructive. Nearly 1 in 3 LGB respondents say that religion is “not at all important” which is twenty five points higher than those who ID as both LGB and evangelical. It’s clear that LGB evangelicals stand between their sexual orientation and religious identity. 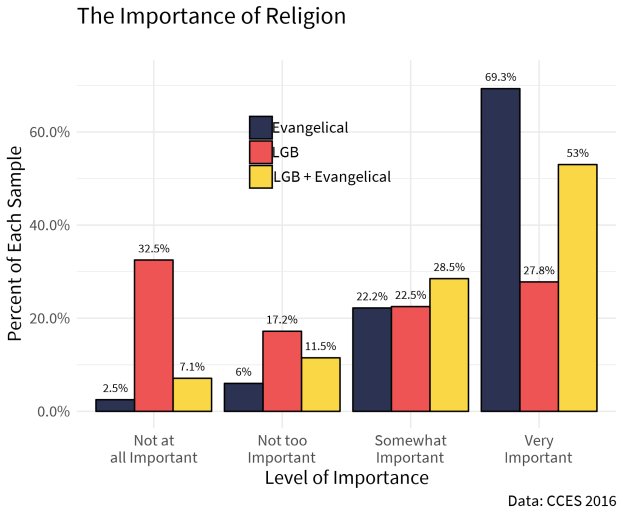 In order to really drill down and try to understand where LGB evangelicals depart from either of the two other groups, I wanted to look at issues that would seemingly pull them in opposite directions: abortion and gay marriage. There is no clear link between the gay community and support or opposition to abortion, however evangelicals are vocal and activated on the issue of abortion. This should be an area where if the evangelical identity were to “win out” this is the place to see that. The graph below displays the mean score on four abortion questions in the CCES with the capped lines representing 95% confidence intervals. A similar pattern continues to show itself: the LGB evangelical community stands essentially at the midpoint between evangelicals who are strongly opposed to abortion, and the gay community which is much more permissive. If anything, this evidence seems to support the idea that the LGB evangelical does feel pulled toward a pro-life position but that pull is tempered by their sexual orientation.

The other area previously mentioned was same sex marriage. The graph below displays the mean importance of same-sex marriage on the x axis, with the “importance of religion” variable on the y-axis. The clear outlier here is the bottom red line which represents the views of the LGB community. The downward slope of the line indicates that as an individual increasingly sees same sex marriage as important, the overall importance of religion drops, meaning that one view runs counter to the other for people in the gay community. However, this is not the case for LGB evangelicals. In fact, the line is essentially flat from left to right. This indicates that individuals in this group do not feel the need to alter how important religion is to them, regardless of how strongly they feel about gay marriage. In essence, it looks like these individuals have found a way to reconcile these seemingly contradictory belief systems. Previous qualitative work by sociologists found that groups which existed to help evangelicals navigate their sexual identity did so my showing them an interpretation of the bible that doesn’t see same sex activity as a sin.

I find this group of individuals fascinating because I suspect that they live their lives with a high degree of tension every day. I would have guessed that many of these LGB evangelicals had started attending church less because of the seeming cognitive dissonance but that is not borne out in the data. In fact, LGB evangelicals attend church just 10% less than evangelicals, but 30% more than those in the gay community generally. It will be fascinating to see if the share of LGB evangelicals begins to grow in the wake of the Obergefell decision (2015) and the increasing acceptance of same-sex marriage in American society.

If you would like to read the full article that includes a number of additional graphs and background literature on the LGB evangelical community, I published a paper in the journal Politics, Groups, and Identities. You can read the full text by clicking here.

Ryan P. Burge teaches at Eastern Illinois University in Charleston, Illinois. He can be contacted via Twitter or his personal website. The syntax for the post can be found here.