When Winning is Losing: How the Christian Right Undermined Religion in the US

By Paul A. Djupe and Jake Neiheisel

One of the most striking trends in American religion over the last thirty years is its decline. From just 5 percent in the early 1990s, the number of Americans who have shed their religious identity has climbed to about 25 percent. Finding out why has become a bit of a cottage industry, but there is some degree of consensus on one cause: the politics of the Christian Right. First documented by Hout and Fischer in 2002, the argument is simple: The Christian Right’s uncompromising stances on abortion and gay rights have made religion inhospitable to liberals and moderates.

There are some serious qualifications to make about this claim, which we have done elsewhere with Anand Sokhey. In brief, it makes no sense to think that the Christian Right drove liberals out of their liberal and moderate churches – the movement just isn’t salient to them.

Here, we are interested in another use of salience. Dating back to Phil Converse’s most famous edited-volume chapter in all of political science, people do not link groups to their decision-making without inspiration. If people don’t think often about politics and think less about religion, then something needs to draw their attention – hence our focus on salient controversy. Most political conflicts start small and groups are involved in a process of expanding the scope of conflict to draw in more participants and try to tip the balance in their favor. Very public fights over gay rights in the context of ballot measures proposing to constitutionally ensconce bans on same-sex marriage where gay rights groups are organized work to draw the attention of the public to the fight.  Since most of the public has come to disagree with the anti-gay stance of the Christian Right, more visible fights should cause people to drop a marginal religious identity and become a “none.”

The number of nones in the states has been increasing, but unevenly as Figure 1 shows in the 2006-2016 time period covered by the Cooperative Congressional Election Study.[1] Some jumped up quickly and leveled off (e.g., Vermont), some climbed steadily (e.g., Washington), and a few have remained fairly constant (e.g., Nebraska), but there are bumps and wiggles throughout. 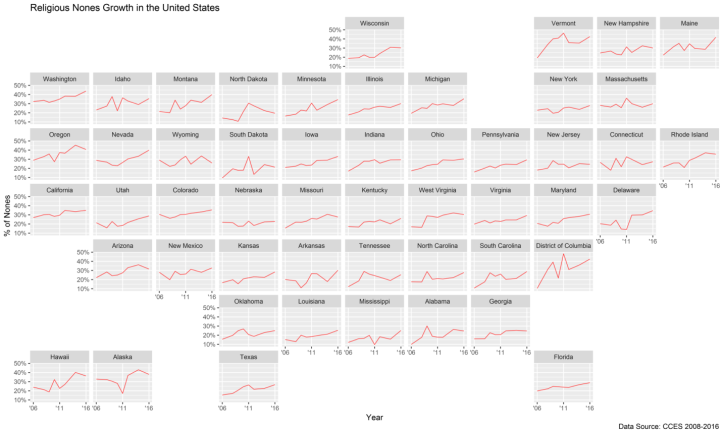 In our research forthcoming in Political Research Quarterly “Are the Politics of the Christian Right Linked to State Rates of the Non-Religious? The Importance of Salient Controversy” with Kim Conger, we drew on some novel data to test claims about the political origins of the religious nones in the states. This is over just the time period when fights over gay marriage bans were happening in the states. We used data on Christian Right group counts in the states as well as data from Kim Conger’s decades-long project to document CR influence in state politics using elite perceptions. We used statistical models [2] that key in on the change in behavior from one year to the next – anything that does not change from year to year is washed out of the model, as only changes can predict changes.

As the figure below shows, when a state enacted a ban on same-sex marriage (usually tied to other gay rights as well) and the Christian Right was visible (when they had greater perceived influence), the rate of nones climbed considerably. In one set of estimates, there were 6 percentage points more nones in high CR influence states compared to low influence states with same-sex marriage bans; in the other set of estimates, the rate doubled (from 0.14 – 0.28). In states without bans, CR visibility had only a slight (for the census) or no influence (in the CCES) on the rate of nones in the states.

If visible, controversial politicking drives people away from a religious affiliation, it should also be difficult for religious groups to attract adherents as well. This is just what we find below. The effect is not large, but states with bans in place had 1-2 percent fewer evangelicals. That is, a visible and effective Christian Right helped to suppress the level of evangelicalism in the states.

Nearly one year ago, a group of 150 evangelical leaders issued the “Nashville Statement” – a letter reaffirming a traditional view of sexuality (opposing homosexuality) and marriage (opposing same-sex marriage) that stands well apart from where the law and most Americans are. We doubt that same-sex marriage will be rescinded at this point, especially as public opinion continues to grow in support and movements are afoot to extend gay rights to what Americans assume they already are. But the Nashville Statement could have the opposite effect if it becomes widely publicized – to confirm the stereotypes that Americans hold of religious groups and give further inspiration to some to shed marginal identities.

These dynamics help explain why intense religion has remained rather stable, while those with modest affiliations have declined as Schnabel and Bock find. All this is to suggest that only those who exist at the margins of organized religion in the United States—those with weak religious identities—may continue to fall from the faith at disproportionate rates. Taken to its logical extreme there may come a point in the not-so-distant future where there exist only those with strong religious attachments and those with no connection whatsoever to religion—organized or otherwise. We may therefore see a leveling-off of the nones at some point. At the same time, strong levels of religious commitment may similarly bump up into a ceiling, leaving open the question as to whether there is still “fuel” available for the Christian Right to burn in their quest for both card-carrying members and fellow travelers.

Jake Neiheisel is an Associate Professor of Political Science at the University at Buffalo, SUNY. Further information about his work can be found at his website and on Twitter.

1. Thanks to Ryan Burge for help making this graph, though we know how to make it now!

2. We use panel models with year and state fixed effects.