Growth and Decline in American Religion over the Last Decade

It’s an odd thing when your work goes viral online. There’s really no preparation for it. I saw that the General Social Survey had released its 2018 data. I knew I had the code to calculate the change in size of religious groups. I ran the syntax quickly and put together the graph while my kids were in the bath. I tweeted it out – then it took on a life of its own. Media inquires followed from Christianity Today, Religion News Service, CNN, the Daily Mail, and eventually an Easter Sunday call in to C-SPAN. Running the code and making the graph took about twenty minutes; I have worked hundreds of hours on other things that received no attention. The internet is weird.

I know that the media loves a provocative and simple headline and: “Nones are the largest religious group in the United States” fits the bill pretty well. But, as anyone who studies this stuff knows, it’s way more complicated than that. There are numerous survey instruments out there. The GSS just happens to be the oldest one. So, to provide some context I wanted to do the same type of analysis with the Cooperative Congressional Election Study. It’s only been conducted since 2006, but has a sample size that is 10-20x the size of the GSS. That means that the calculations have a much smaller margin of error, and that the sample can be cut down (say at the state-level) and still retain decent statistical power. So, what groups have grown according to the CCES? And which have declined? And what states have seen big shifts in the size of religious groups?

The graph below tracks the changes in the major religious categories over the last decade of the CCES (2008-2018). The overall impression that I am left with is stability. There are some bumps and wiggles in some of the lines, but those can be distracting from the most important part: the overall share in 2008 vs. 2018. For groups like evangelicals, the difference is about one percentage point up – not anything to get too worked up about. Catholics were holding steady until 2016 then have seen declines in both 2017 and 2018, losing almost three percentage points. I wouldn’t describe that as a decline just yet, but if those losses are sustained for another few survey cycles then we can say with some certainty that Catholics are on the downward swing. Mainliners have seen modest declines in the last decade and sit at about 12% of the population now, which is half as much as evangelicals.

There is one clear trend that is unmistakable, though. The line for no religion continues to trend in an upward direction. Nones were 22.2% in 2008, now they are 29.5%. They are easily the largest share. A lot of that growth comes from a category included in the CCES that is absent in the GSS – “nothing in particular.” In fact, of the overall growth (7.3%), 5.5% of that is just the growth in the “nothing in particular” category. If you look at the CCES, the result is clear: about three in ten Americans don’t identity with a religious tradition. That contrasts with the GSS figure of 23.1% nones in 2018 – there are a lot of reasons that I think the numbers diverge, more on that later.

But, that’s not what I wanted to get too hung up on. Instead, I thought I would take advantage of the huge sample sizes to take a look at how religiosity has shifted at the state level. So, I calculated the religious composition of each state in 2008 as well as 2018 and then identified which religious groups have changed the most in each state. The map below visualizes which religious group has declined the most in each state as a share of each states total population.

A big caveat here, though. Some of these states saw very small declines. For instance, California’s evangelical population only declined by .4% and Indiana’s Catholics were down 1.4%.

I wish I could tell you that I see a clear pattern in these results, but I don’t think that the data presents itself that way. There are a few things that can be noted, though. It looks like the Catholic losses are pretty widespread. You can almost trace an unbroken line of red from the West Coast to New England. That even extends southward as well, into places like Arkansas and New Mexico. It also looks like mainline Protestants are losing in places that they used to be strong: parts of New England and the upper Midwest. It is also noteworthy to me that states that were traditional strongholds of evangelicals: Georgia, South Carolina, and Mississippi, are sustaining some losses there. Take Georgia as an example. Its evangelical share is down 2.7%, while the nones are up 10.5%. The same pattern is evident in South Carolina: evangelicals down 3.3%, nones up 8.2%. Those aren’t good trends in you are an evangelical Protestant. Is it possible that the deeply conservative politics in those states helped drive up the nones? 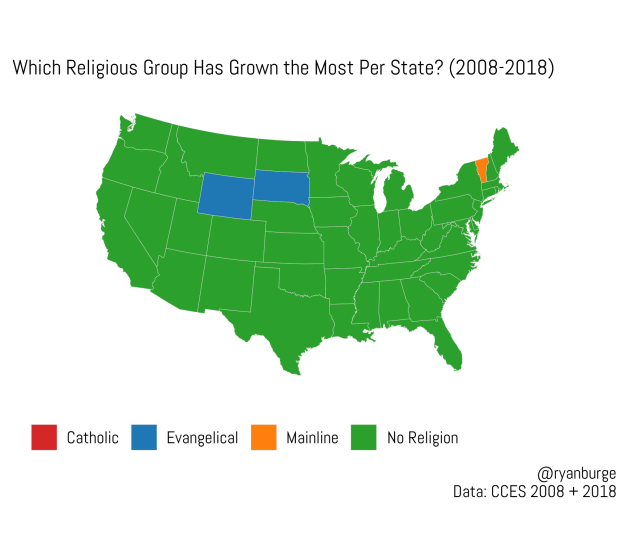 The growth map above has a clear pattern: nones, and lots of them. Of the fifty-one states (including Washington D.C.), the nones were the fastest growing religious group in 46 of them. Evangelicals grew in Alaska, Wyoming, and South Dakota. Mainliners grew in Vermont. Catholics grew in D.C. 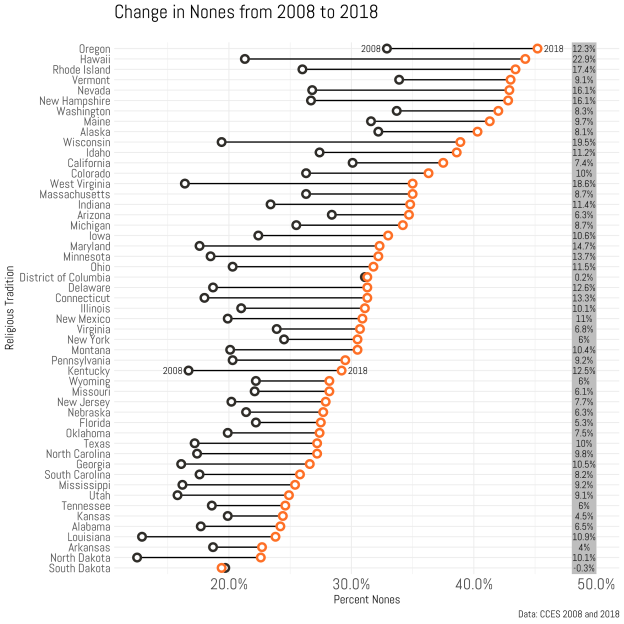 Where did nones make the largest strides? The dumbbell plot above visualizes that and it’s not in places I would have suspected. They grew 22.9% in Hawaii, 19.5% in Wisconsin, 18.6% in West Virginia, and 17.4% in Rhode Island. Not exactly progressive strongholds in the United States. However, overall growth was widespread. In fact, the nones enjoyed double digit gains in 24 states. The only state in which the nones declined was South Dakota (-0.3%). The slowest growth states were Arkansas (4%), Kansas (4.5%), and Florida (5.3%). A map of the changes is available here.

If you are looking for dramatic shifts, religious demography should not be your choice of careers. A five point movement over a period of a decade can seem dramatic to those of us who study the religious landscape of the United States. Given that background, here are two statistics that are worth considering. Between 1993 and 2018, evangelicals have declined 7.4% according to the GSS. Between 2008 and 2018, the nones have risen 7.3% according to the CCES. The shift in nones is just over one half a percentage point every year since 1993 (using the GSS measure). The one question that I am often asked that I can’t answer is: how large will the nones get? I think that they will plateau. I don’t know if that’s in five years or fifteen years, but even if they stopped growing this year, it will still be the most dramatic unbroken streak of growth we have seen in the last five decades. And the United States will be altered forever, both socially and politically, because of it.