The Curious Case of Born-Again Catholics

Blame it on Mike Pence. During the run up to the 2016 presidential election, the Vice Presidential nominee said that he was an “evangelical Catholic.” As a guy who grew up evangelical, married an Irish Catholic, and studies social science – my head wanted to explode. I kept thinking: “please don’t let that become a thing.” Well, it’s a thing. I got a great email from my friend Melissa Deckman noting that both she and Erin Cassese were working with recent surveys that had a good chunk of Catholic responders that also identified as “born-again or evangelical Christians.”

What do we do with these people? I tried to put my thoughts down last year in a post titled: Do you have to be Protestant to be born-again? Short answer: I don’t know. But, this “problem” of evangelical Catholics is just not going away. So, using Melissa’s email as inspiration, I took a deep dive into born-again Catholics. How many are there? Why do they say they are born-again? Do they just not know what that means? Or are they starting to see born-again as a political label more than a religious one? As always I turn to the Cooperative Congressional Election Study.

The graph below is the average number of Catholics who indicated that they were born-again going back to 2006. The capped lines represent 95% confidence intervals. It seems that there is a pattern. In 2008, during the election of Barack Obama, the share of Catholics who said that they were “born-again or evangelical” was at its low point: just 8.9%. However, from there we see a steady and unbroken rise, when it reaches its apex in 2016 at 16.4%. That’s an 85% increase in the number of born-again Catholics.

I don’t think it’s a coincidence that this figure was the lowest during Obama’s first election and at its peak during Trump’s victory in 2016. Since then, there’s been a modest decline: currently ~15% of Catholics believe that they are “born-again or evangelical,” down about a percentage point.

So, why are we seeing this change? Let me work through some of the demographic explanations before returning to politics. I calculated the percentage of Catholics who identified as born-again based on their highest level of education completed. That’s displayed below with 95% confidence intervals. One might assume that this is an artifact of people not knowing what born-again really means and those with lower levels of education would make this mistake. The data does support this hypothesis somewhat. Those Catholics who didn’t graduate from high school were much more likely to say that they were born-again than people with more r education. However, there’s really very little difference between the high school graduates and those with a bachelor’s degree. There is a bit of a drop off among those who attended graduate school, about three percentage points. So, maybe education does play a role, but it’s not a huge one. 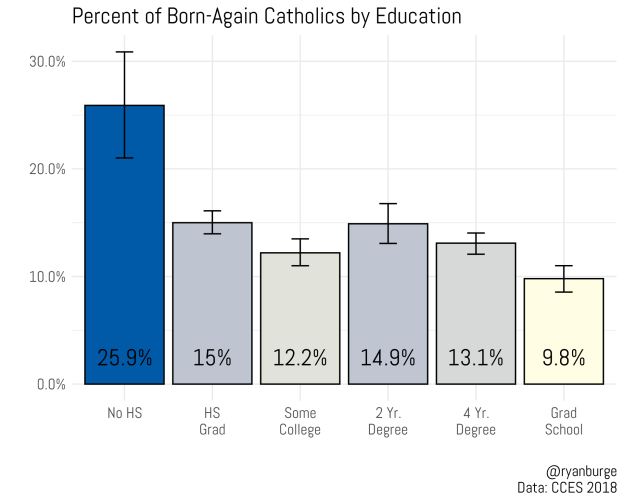 I explored two other possibilities. First, is there a racial component to this? The short answer: not really. Nearly three in ten black Catholics said that they were born-again, but all the rest of the racial groups were much lower (between 12-17%). So, not a clear story there. You can see that visualized here.

But maybe it’s a generational thing. It’s possible that older Catholics who came of age during the Religious Right might feel drawn toward the terms “born-again or evangelical” or that younger devout Catholics might have a different conception of the term. The waffle charts below represent the Catholic sample broken down into six different age groups. There is some evidence that younger Catholics choose the term more regularly with 17.2% of those 18-29 and 19.3% of Catholics in their thirties checking that box, but 13.7% of Catholics in the oldest age group also believe that they are “born-again or evangelical.” 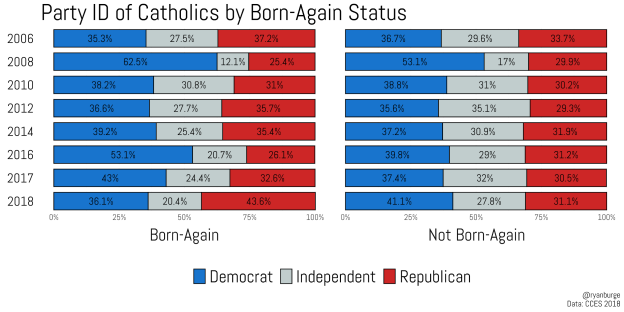 For a more rigorous analysis I put together a regression model that predicted whether a Catholic would select the “born-again” option on the survey. The model included an interaction between church attendance and political partisanship as well as controls for age, gender, race, and education. The results are visualized below. 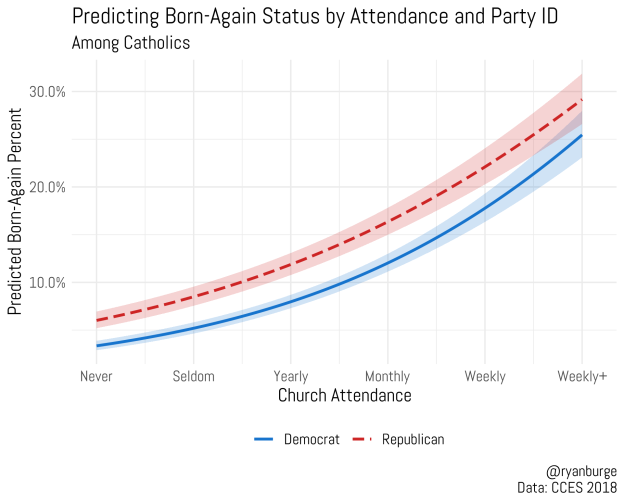 We can see that for both Republicans and Democrats the more frequently they attend church the more likely they are to identify as born-again. The model predicts that a Catholic who never attends is only about 5% likely to identify as born-again, while about a quarter of Catholics who attend multiple times a week would identify as a “born-again or evangelical” Christian. The other noteworthy thing here is how small the differences in estimates are for the Republicans and Democrats. The lines never deviate more than 4% and at the top end of the attendance scale, there’s no statistical difference in the estimates for Republican and Democratic Catholics. It seems that the rise in born-again Catholics is based more on religion than politics.

I have to be honest, I spend a little bit too much time thinking about how people answer religion questions. But, this one has me just a bit stumped. The results of the regression analysis push me towards a conclusion: I think that the American public may see the term “born-again or evangelical” as more a label of religious devoutness, regardless of tradition, rather than a type of religious conversion. That is: “born-again” may be a shortcut for “really religious.” This interpretation is reinforced by the fact that 45% of born-again Catholics say that they attend church at least once a week, compared to just 25% of not born-again Catholics.

What’s curious, though, is that religious devotion in America has increasingly meant being more conservative politically. If that’s the case then we should have seen Catholic Democrats hesitate to embrace the label. So, that’s an unsatisfying conclusion. This reminds me of a post I wrote entitled: “When You Ask People to Describe their Religion, Bad Things Happen.” Religion questions are incredibly hard for lots of people to answer but this seems to be something else, something that is a little systematic. If anything this may be a conglomeration of identification and affiliation. Maybe “born-again” needs to be seen as its own category, regardless of the religious tradition people select alongside it. This is why studying religion is hard and wonderful: people’s conception of it is always changing.