It’s been a tumultuous decade for religion and politics in the United States. In 2008, the country overwhelmingly elected the first African-American in our nation’s history. His administration was plagued by questions about not only his citizenship but also his religious beliefs. In Obama’s 2012 reelection, religion also played a prominent role, as his challenger Mitt Romney was the first Mormon to be nominated for president of the United States. Romney’s candidacy and religious faith was questioned by some evangelicals, who described Mormonism as a cult. Then we got Donald Trump.

Trump’s religious background was questionable, to say the least. Numerous gaffes on the campaign trail illustrated his complete unfamiliarity with Christianity. He tried to put offering money in the communion plate in Iowa. He told a crowd of evangelicals in Iowa that he never asks for forgiveness for his sins. He famously referred to the second letter that St. Paul wrote to the church in Corinth as “Two Corinthians.” I think it’s fair to say that Trump might be the most religiously ignorant president we’ve had. Against that backdrop, members of religious groups have to make decisions about who to cast their ballot for on election day. Do they select a candidate who obviously doesn’t understand matters of faith, but espouses policy that aligns with their worldview? Have Christian groups moved to the left as a response to the Trump administration? Or did the Obama presidency have a lasting effect on the partisanship of many Catholics and Protestants over the last decade? Fortunately, I have data to answer those questions.

The Cooperative Congressional Election Study is where I turn, yet again. The smallest sample was in 2008, with 32,000 respondents. The more recent waves have close to 65,000 in the survey. That means that there’s a reasonable amount of statistical power in these estimates. I limit the sample below to the groups that had at least one hundred respondents in each of the biannual surveys between 2008 and 2018. The red circles indicate the mean party identification for the group in 2008 and the yellow circles denote the mean partisanship in 2018. The number in the box to the right denotes the movement between the two waves. Positive numbers represent groups have that have moved toward the Republicans, and negative numbers are those who have moved toward the Democrats. The dashed vertical line is the average for both the 2008 and 2018 samples, which differs by just 0.13. 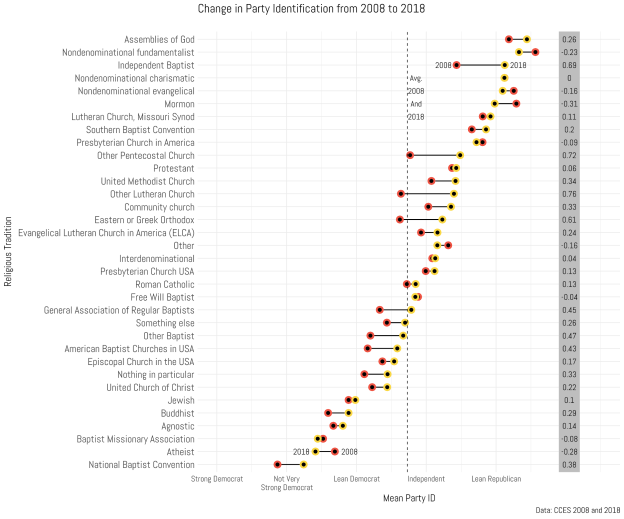 There are 34 traditions listed in the graph above. Of those thirty-four, just seven moved leftward on the partisanship spectrum, while 27 moved to the right. Recall that anything more than +.13 difference is greater than the shift overall among Americans. There are many religious traditions that moved much more than this. Many small traditions like “other Pentecostal”, “independent Baptist”, “other Lutheran,” and “Other Baptist” fit the bill here and all moved to the right. However, I wanted to take a closer look at a few of the larger traditions in the United States to see if there is evidence of Obama or Trump backlash. 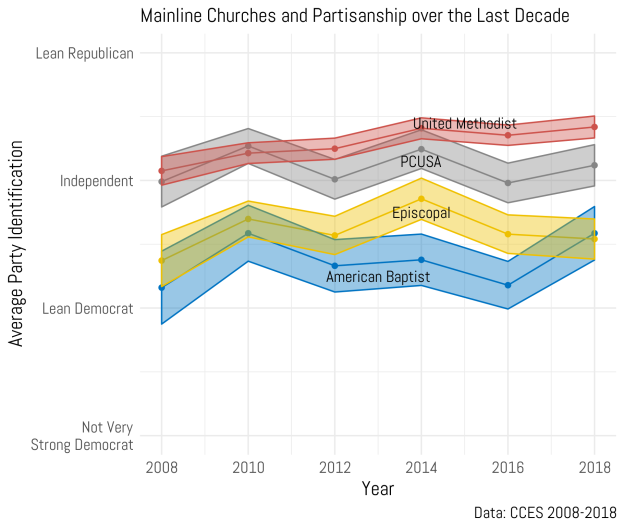 The graph above displays some of the largest mainline denominations in the United States. Note that none of them were especially far to the political left in either 2008 or 2018. The story here is largely one of little to no movement. Episcopalians and those from the PCUSA are essentially at the same spot politically in 2018 as they were in 2008. There has been a somewhat large movement toward the Republicans among the American Baptists, which is something to keep an eye on in the future. The United Methodists, however, have not seen a quick jump to the right but instead a slow and steady march, with every year nudging further and further rightward. This is especially important given the denomination’s recent struggles with the issue of gay marriage – based on that, we should expect to see continued shifts to the right in the future 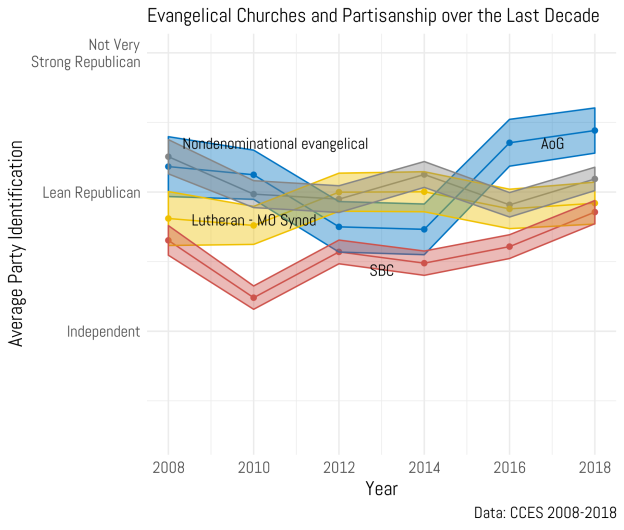 Obviously, evangelicals are strong supporters of Donald Trump. The stories about the vast majorities who voted for him are legion. So, has their partisanship shifted to the right as a result of Donald Trump or are they just Republicans, through and through, no matter who’s in the White House? The graph above seems to provide support for both theories. Southern Baptists, in the red, are at the same spot in 2018 that they were ten years prior. There is a slight move to the Democrats between 2008 and 2010, however from 2010 until 2018 there is a slow and steady march to the Republicans. The other groups show an up and down pattern but the same conclusion is reached: for each of these groups, they have made no significant overall moves in the last decade. Each group has been and continues to be filled with solid Republicans. 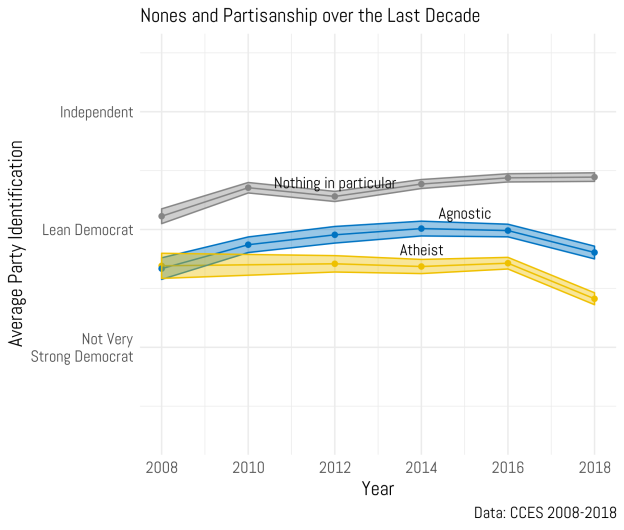 Finally, what about the nones? If all these Christian traditions are becoming more and more Republican over time there has to be a counterbalance somewhere, otherwise the overall partisanship of the country would have shifted more than 2% over the last decade. Just for reference, Agnostics and Atheists make up about 5% of the population, each, while the nothing in particular category is much larger at about 20%. Note how the “nothing in particulars” jumped significantly to the right between 2008 and 2010 and then have slowed drifted even more toward the Republicans since then. Atheists and agnostics show a different story entirely. The agnostic trend is a curvilinear one. They were closer to the Democrats in 2008 and 2018, but slightly more Republican between 2010 and 2016. On the other hand, atheists were rocky steady between 2008 and 2016, until lurching further toward the Democrats in 2018. This might be seen as a reaction to Donald Trump, which is also evident to a lesser degree among agnostics.

Taken together, this evidence strikes a blow to the argument that there is polarization among Protestant Christian traditions. Looked at here, the overwhelming narrative is that Protestants are more and more Republican every two years. What we may be seeing here is asymmetric polarization, which has been occurring in Congress now for decades. Those who study the ideology of members of Congress indicate that Republican have moved further and further to the right over time, while Democrats have moved much less to the left of the political spectrum. The shifts in the Democrats in Congress is mirrored by the religious nones as that group has been relatively stable in partisanship over the last ten years, although there has been a leftward shift in 2018. American religion is becoming more and more synonymous with the Republican Party while those who have no religious affiliation tend to be the (weak) base for the Democrats. If one wants to be an active Christian but disagrees with Republican politics, where do they go? Despite the fact that most Democrats do currently claim a religious affiliation, it seems that the places of refuge are dwindling every year.