Religion and the Vote in the 2018 Midterms

The 2018 Midterm election was important for a number of reasons. Politically, it was the first chance that voters had to either correct course over Donald Trump or the electorate could double down on his Presidency. Twitter was obsessed with whether we were going to see a “blue wave” that would sweep the Democrats back into the majority – at least in the House, but possibly in the Senate, though unlikely in the Senate given the large number of seats up in deeply red states.. While early on election night it seemed that the wave was not really going to happen, as polls closed in the West the media narrative was clear – it was truly a landslide election. The Democrats picked up 41 seats – which was their largest pickup since 1974.

From a religion and politics perspective, it also gave us our first opportunity to see how alliances have shifted in Donald Trump’s America. Would religious groups that backed him strongly in 2016 check his power by voting for Democrats in 2018? Clearly many of them had been called hypocrites for backing a man of dubious moral character. Would that show up at the ballot box? Let’s take a look.

A quick methods aside: This data comes from the initial release of the 2018 Cooperative Congressional Election Study, which surveyed 60,000 people. As a way to gauge vote choice in 2018, I used House election results. I couldn’t use a vote for the Presidency (because Trump wasn’t on the ballot) and I couldn’t use Senate races (because only a third of the sample lived in a state with a Senate election). I understand that House races can be odd things, and that sometimes candidates run unopposed, or have some type of bipartisan appeal. However, they provide me the only opportunity to see what voting looked like in 2018 across the nation. In addition, I limited the analysis to just those traditions with at least 150 members – which stills gives us a ton of denominations to look at, so let’s do it. 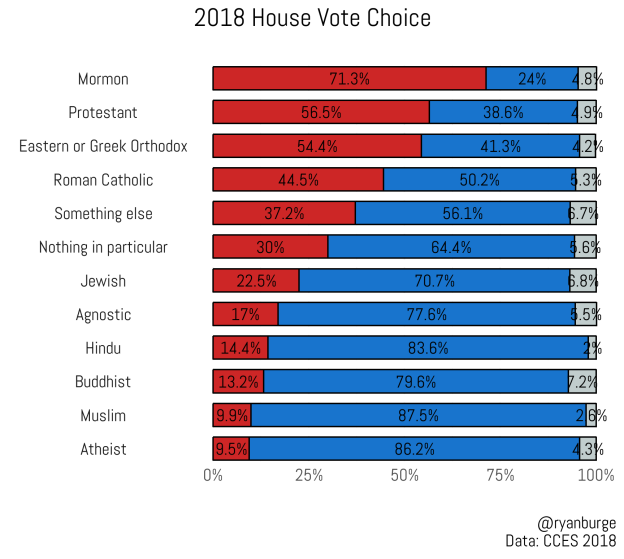 Let’s begin with the broadest religious affiliation question, displayed in the visualization above. Obviously, the share of the vote for Democrats is in blue, the Republicans are in red, and a vote for anyone else is in gray. Speaking broadly, Protestants heavily favored the Republicans, but I will dig into that with more detail in a moment. It is notable that the Catholic vote leaned toward the Democrats. This is surprising to me, as previous analysis I conducted found that Catholics at all levels of church attendance gave Trump positive job approval numbers. This may portend a softening of support for the Republicans going forward. Mormons were strong for the GOP, which is not that unusual, however considering that Mormon support for Trump was just about 51% in 2016, it’s clear that they can make a distinction between their own Congressional Republican and Trump.

Most of the rest of the traditions were strong for the Democrats, especially the religious nones. It’s notable that Democrats won huge majorities of Atheists/Agnostics and even Nothing in Particulars. The smaller constellation of religious traditions in the United States (Muslims, Hindus, Buddhists, and Jews) were also especially strong for the Democrats. There’s a lot of blue in this graph – however, it’s important to remember that Protestants are 40% of the population and they favored the Republicans.

Speaking of Protestants, I wanted to dig down a little bit and look into how some individual Protestant denominations voted in 2018. The above graph includes just the Baptist traditions with at least 150 respondents. I think it’s instructive how racial demography intersects with religious tradition. The two denominations that were the strongest for the Republicans — Independent Baptists and the Southern Baptist Convention – are also two of the whitest Baptist traditions at 76.5% and 81% respectively. On the other hand just 15.9% of the National Baptist Convention supported the Republicans and that denomination is one fifth white. A similar finding occurs with the Baptist Missionary Association which was 77.9% for the Democrats and just 19.4% white. If anything, these results should compel us to be specific with our racial parameters when we discuss how certain denominations vote. 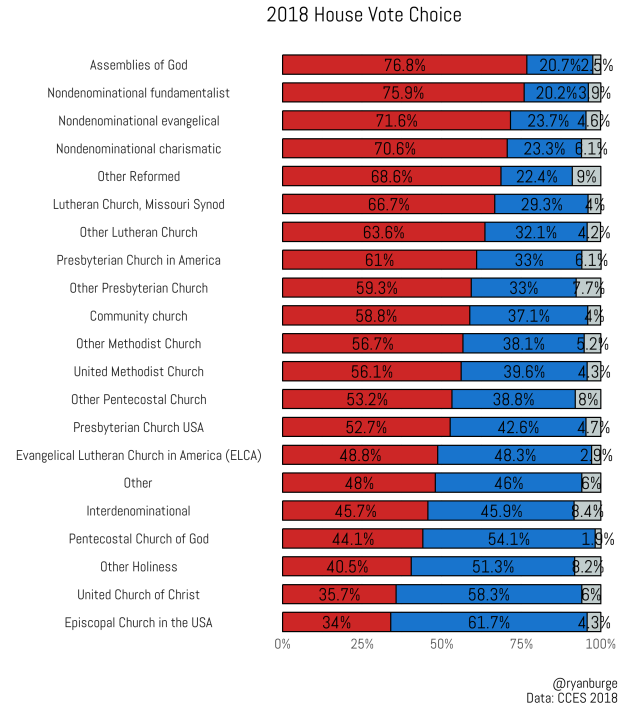 Finally, I wanted to visualize every other Protestant tradition that had at least 150 respondents. That is displayed above. The first thing that strikes me is how much red there is in the stacked bar graphs. There are 21 traditions included, and, of those, 14 traditions favored the Republicans over the Democrats – some by very large margins. This is especially true among nondenominational churches. The CCES breaks this group down into several subgroups and, as you can clearly see, each of them went at least 70% for the Republicans in 2018. Other solid red traditions were the Assemblies of God, the Lutheran Church – Missouri Synod, and the “Other Reformed” category. There were some churches that were not so enthusiastic about one particular party, though. Most notably, the United Methodist Church, one of the largest denominations in the United States, cast just 56.1% of votes for the Republicans. That’s slightly down from their 60% vote share for Donald Trump in 2016.

The mainline churches also stand out here. For instance, just a third of the Episcopalians voted for the Republicans, with a similar pattern occurring among the United Church of Christ. The ELCA, which is also considered a mainline tradition, was evenly divided between the two major parties. The other traditions that favored the Democrats were ones that had large majorities of African-Americans such as the Pentecostal Church of God and the “other Holiness” category. Again, race is an important influence on vote choice.

Taken together, these results underscore my previous finding that American religion has become increasingly polarized. The first graph indicates very few traditions show an even divide on political partisanship. The only groups that show a moderately balanced vote share are Protestants and Catholics. However, once you dig deeply into the Protestant numbers, it becomes clear that most of the white traditions were strongly for the Republicans (with the exception of a few mainline denominations), while traditions that had a large share of racial minorities cast ballots for the Democrats.

The one thing that stands out to me is the Catholic result. In my estimation, they are the religious group that best mirrors the general consensus of the American electorate. In 2016, 50.1% of them voted for Donald Trump. However, in 2018, just 44.5% of their ballots went to the Republican candidate in House races. That’s a significant defection. And many of these Catholics are located in places of enormous consequence to the Electoral College (Pennsylvania and Wisconsin). Otherwise, I don’t see much significant repudiation by religious groups of Donald Trump’s Republican Party. If anything they have become even more entrenched in their political views.