The next week may be the most consequential period for the United Methodist Church in recent memory. Thousands of delegates will descend on St. Louis to convene a special session of the General Conference. The purpose of this meeting is to consider whether and how the denomination will move forward on the issue of same-sex marriage.

The United Methodist Church stands at a precarious place, especially as the denomination with the greatest geographic spread of any religious organization in the US. In the American religious landscape it is the prototypical mainline church – filled with middle and upper-middle class, mostly white congregants who are moderate on social issues but tend to vote for Republicans because of taxation and regulation. It’s also incredibly diverse with United Methodists appearing in 93% of counties in the United States, a share that’s higher than any other Protestant denomination. However, because same-sex marriage is the law of the land and more and more congregations have begun to welcome the LGBT community, the UMC is at a crossroads. Currently, the Book of Discipline, the document that governs the behaviors and beliefs of United Methodists, states that, “practice of homosexuality is incompatible with Christian teaching” and that practicing homosexuals are barred from becoming ministers.

There are three primary proposals being considered at the General Conference.

The One Church Plan would take a page out of Baptist polity, giving each individual church the ability to make its own decision on the topic of gay marriage.

The Traditional Plan would double down on the exclusionary language in the Book of Discipline.

The Connectional Conference Plan would eliminate the regional conference structure of the UMC and reorganize churches based on their theological convictions.

If you are interested in understanding what’s at stake at this meeting, Emily Miller at RNS does a terrific job of going into detail about each of these three plans, as well as other alternatives.

So, what does the average United Methodist think about gay marriage? Fortunately we have a dataset that contains 2,969 United Methodists that was collected by Cooperative Congressional Election Study in October and November of 2016. The graph below is a good place to start: how does the UMC feel about gay marriage? It’s clear that there is a sharp divide. About six in ten United Methodists are in favor of same-sex unions, while four in ten are opposed. These numbers look very similar to the US population, among whom 61.6% were in favor and 38.4% were opposed. So, no matter what decision comes out of the General Conference, a significant portion of rank and file United Methodists will be upset.

I also wanted to try and understand how church attendance and education interact to generate support for same sex marriage. The plots below display those who have earned a bachelor’s degree with a red line and those without a four year degree with a gray line. I also took the opportunity to break down United Methodists into four regions of the United States: New England, the Midwest, the South, and the West. The results indicate that the more someone attends church the less supportive they are of same-sex marriage, but the slope of that line varies widely by region. For instance, the drop in support by attendance is the steepest among United Methodists in the South, while it is nearly flat for those in New England. Generally, those with a college degree are more supportive of gay marriage than those with lower levels of education. On average, the difference is about 15-20%.

If the United Methodists enable congregations to be welcoming to the LGBT community at their General Conference it seems that they will sustain some losses among the most frequent attending United Methodists in the Midwest and in the South. The losses in New England would be minimal, while only those Western United Methodists without a college degree would disagree with the decision. 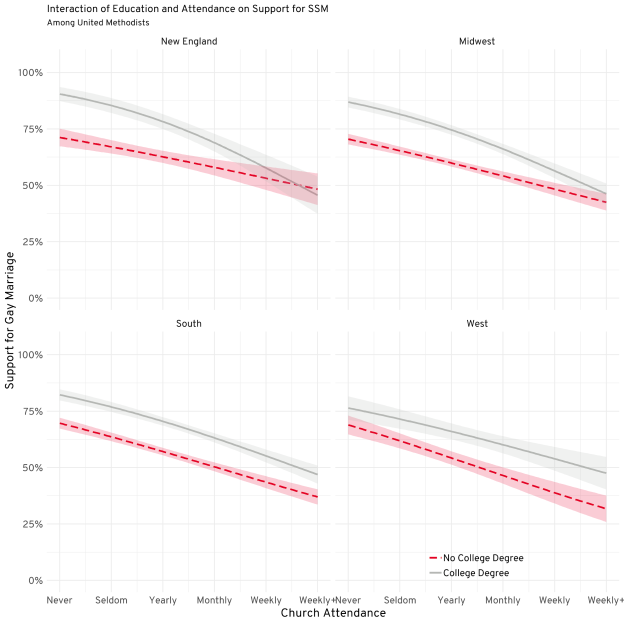 But a bigger question looms: Do United Methodists really care about gay marriage? The CCES asks respondents to indicate the level of importance they place on a number of political and social issues. I broke the United Methodist sample into three levels of church attendance as a proxy for overall religiosity and calculated the means along with 84% confidence intervals (indicated by horizontal capped lines). It’s clear that social issues, by and large, don’t really register for United Methodists at any attendance level. Note that even among the most active United Methodists, gay marriage ranks as least important. While this may be the center of attention for thousands of them in St. Louis next week, it seems likely that many United Methodists will shrug their shoulders at whatever comes out of the meeting.

I feel for the United Methodist Church, as my denomination (ABCUSA) has long struggled with what to do with same-sex marriage. There are churches in the ABCUSA who say that they will leave the denomination unless it becomes open and affirming and there are other churches who say that they could no longer associate with churches that have openly gay pastors. It’s truly a situation where not everyone can win. However, this data does provide some support for the idea that United Methodists, on average, seem supportive of same-sex marriage. There will be some devout members who will be angered at a decision to allow congregations to be open and affirming and it’s likely that some of them will leave the denomination as a result. But church traditions are sticky things and change is hard. Some will say that the Truth of the Bible cannot be discerned through public opinion polls, but for those who want to know what their fellow United Methodists are thinking, these statistics should be helpful in navigating their choices these next few weeks.