The Graying of White Evangelicalism

Last week, 538 ran a piece from Daniel Cox, who is the research director at the Public Religion Research Institute. He takes on one of the most important questions facing scholars of American religion: what will Christianity look like in the United States in the future. Cox uses lots of data from PRRI and other sources to push a simple thesis: white evangelicals are getting older and younger Americans are increasingly moving away from a religious affiliation. That’s a scary proposition for evangelicals. The inevitable outcome is that conservative Christians will become a smaller portion of the population and with that comes a loss of influence in politics.

When the piece was published it was met with some pushback on Twitter. Most notably, Tobin Grant tweeted:

The first claim I want to address is that white evangelicals are getting older because white Americans are getting older in general. I turned to the GSS to address that claim. It has consistent categorization of religion going back to 1972 and provides a reasonable sample size every two years or so. I plotted the mean age for four groups: white Americans in general, white evangelicals, white Catholics, and white mainline Protestants. The results are in the graph below.

What’s a good way for a religious tradition to get younger? Well, one of the factors that leads to a decrease in mean age is having more children. While the GSS does not survey those under the age of 18, fertility rates can show us what lies ahead for each of the religious traditions under study. The figure below shows the mean response to the question: “How many children have you ever had?“

Obviously, fertility rates are in decline for each of the four samples because each sample is getting precipitously older, which drives down fertility. With that in mind, the overall trend for each of the four groups is strikingly similar. The white birth rate, which was between 2.2 and 2.5 child per adult in 1972 has plummeted to 1.8 and 2.1 children per adult in 2016.There are some variations between the traditions, however. Note first that Catholics were never the tradition that had the highest birth rate, despite the Catholic Church’s position on birth control. As mentioned here previously, Catholics are not keen on following the Church’s position in this area and that bears out in this data. It’s clear that evangelical Protestants have the highest fertility rate. In fact, white evangelicals have children at a rate that is 15-20% higher than white Americans, in general. That should be a good thing for the future of white evangelicalism. The more children, the more likely members in the future. Despite this, as we have written about extensively, white evangelicals’ share of the population has not changed in the last decade (as shown below).

So, if evangelicals are having a reasonable amount of children (above the 2 person population replacement rate) but their numbers overall are not increasing, what’s going on? Well, the answer could be multifaceted, obviously. But if I could hazard a guess it’s because white evangelicals have a leaky boat. That is, while young people start out in church, lots of them defect to other religions or no religion when they come of age. Hout and Fischer made this claim back in 2002; and Djupe and friends (2017) found that many Americans left religion after the political fallout of the 2016 elections. Evangelicals can try to breed their way out of a problem, but that’s only successful if their young people stay in the pews for the rest of their lives.

How about Tobin’s other position: white evangelicalism is getting older, but minority evangelicals are younger and will change the face of the tradition. The CCES gives a nice variety of racial options and was an ideal dataset to explore this possibility. The mean age of evangelicals in eight racial groups are included below with 95% confidence intervals. This is compared to the mean age of each of the racial groups in general. 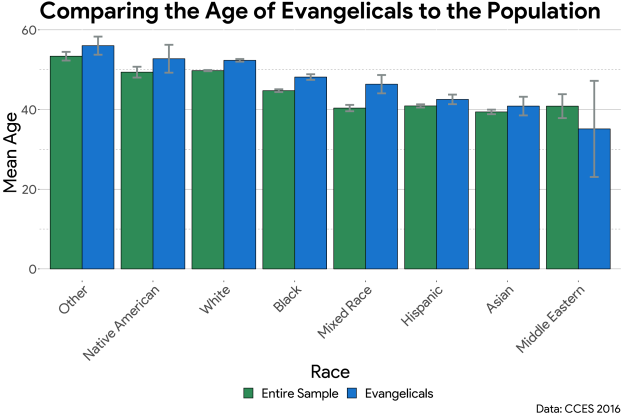 Andrew Lewis and I wrote a prior post arguing that evangelicals are not on their deathbed. I should amend that title to: “Evangelicals are not on their death bed (yet).” This generational shift should worry white evangelicals if they continue to desire to have a disproportionate impact on American politics. They are getting older. That trend is not abating. Yes, there is some hope on the horizon for evangelicals, writ large. Evangelicals of color will make up a larger and larger percentage of the tradition going forward. There will likely still be an airtight relationship between the GOP and white evangelicals, but the importance of that relationship is going to shrink in the national electoral landscape. It’s impossible to know how white evangelicals will navigate this increasing marginalization. One thing is clear: evangelicals are adept at using the narrative of persecution to describe their place in American society. The fact that their power is, in fact, becoming increasingly marginalized over time may accelerate their persecution complex.