How Does Someone Change After Becoming Born-Again?

Anyone who grew up evangelical knows exactly what I am talking about and have seen countless people walk down that aisle and ask Jesus to come into their heart. But, what should a church expect from a new convert? A radical life change or something more modest? In evangelical circles, the stories tend to be fantastical – everyone has heard a testimony of addicts being cured, marriages being reconciled after a born-again moment. But, is that typical?

I set out to answer that question in a new article published in the Review of Religious Research. My data came from three different panel surveys (this is where the same people are asked the same series of questions over a longer period of time to track change at the individual level). First, we need to know how common it is to change their born again/evangelical status. The alluvial diagram below visualizes just the people who switched their born-again status at least once during the three waves of the panel.

An orange band represents their prior status as not born-again, a blue band is someone who indicated that they were born-again but then subsequently rejected that designation in another wave. Generally speaking, 90% of respondents did not change their born-again status. Which means in an average five- year period of time, one- in- ten Americans either becomes born-again or no longer identifies that way. That’s a lot of volatility. (Here’s a table version of all the switching)

But, if evangelists are to be believed, we should see a pretty significant shift in church attendance after someone becomes born-again. I tested that assumption,looking at the average level of church attendance before and after a born-again status change. Here’s how I did that.

Someone attending more than once a week was scored a 6, someone never attending was scored a 1. So if a panel respondent became born-again, I subtracted their prior church attendance from their new church attendance. If someone never darkened a church door, became born-again, then showed up for services multiple times a week, it would be six minus one for a score of +5. I also calculated these moves for someone who stopped identifying as born again using the same strategy. We should expect to see a lot of positive movement for those who became born-again and a lot of negative movement for those who deidentified. 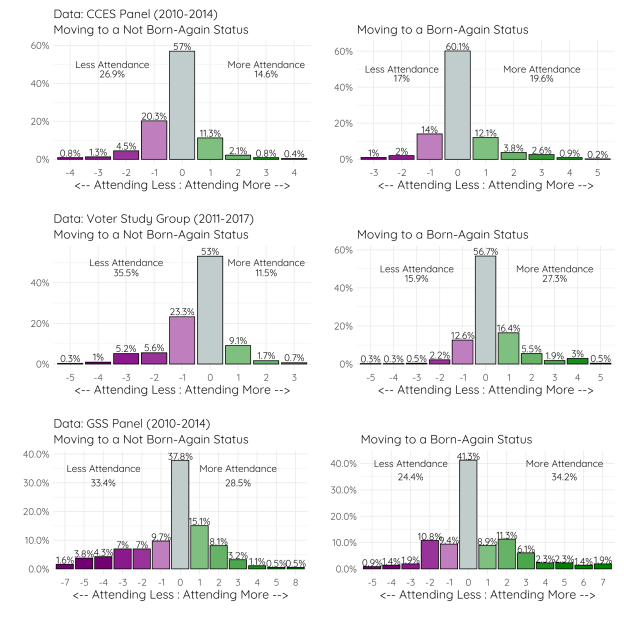 But, the data doesn’t really match the expectations. The number of people who radically shift their church attendance after a born-again experience is incredibly small. The share of people who shift their attendance more than two points up after becoming born-again is low (less than 10%). And, a good chunk of people actually attend *less* after becoming born-again (between 17 and 24%). Also, just over half attend the same amount after a conversion experience and this is consistent across multiple panels.

But, what about a change in partisanship? There’s clearly a link between evangelicalism and the Republican Party in popular culture. Do new converts also shift their politics to the right? I use the same measurement scheme here with a scale ranging from strong Democrat (7) to strong Republican (1). A negative move is toward the Democratic side, a positive move is toward the Republicans – this is labeled in the graphs. 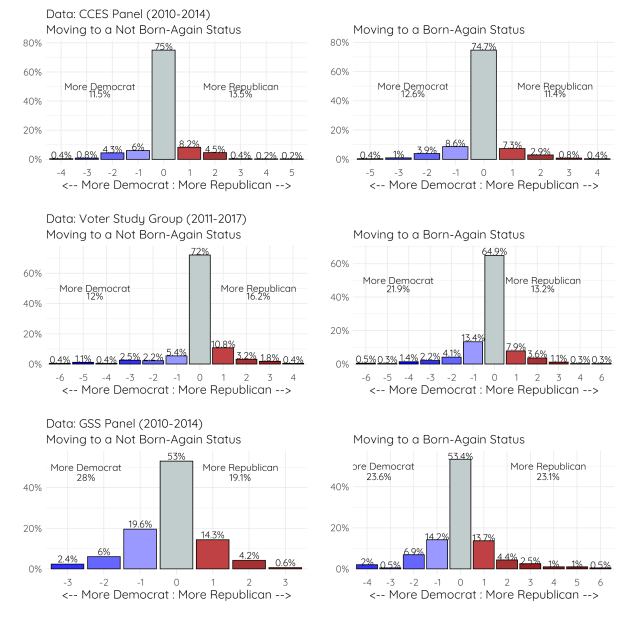 Again, the evidence here is mixed. In two of the three surveys, a respondent was just as likely to move toward the Democrats as they were the Republicans after becoming born-again. But, it’s fair to stay that stasis was the norm for this group of new converts. Somewhere between 50 and 75% of this group didn’t change their partisanship in any meaningful way. There’s not a lot of evidence that indicates that people who deidentify shift strongly toward the Democrats, either. However, there is some ceiling effect to consider: 22% of people who switched to a born-again identity in the Voter Study Group were already strong Republicans to begin with, thus they couldn’t move any further to the right.

But do these shifts in attendance and partisanship become clearer in a model? I put together a simple regression model to predict just how much change one can expect out of a new convert. The results indicate that someone who just became born-again should see a seven percent jump in church attendance, but no statistically significant change in political partisanship. Fairly modest, but the data does seem to point to a small shift toward attending church after becoming born-again.

There are obviously limitations to these findings. I can only look at people who had an adult conversion – Barna has data that indicates 64% of conversions happen before the age of 18. Also, it’s hard to precisely isolate whether the attendance change preceded the born-again change or happened after the fact. Or, people may not really understand what becoming born-again really means and therefore aren’t entirely sure how to answer the question, leading to more born-again switchers. Finally, people may choose a born-again identity after a longer and more gradual shift in partisanship or church attendance – that would be hard to detect on surveys.

But, I hope that these results help social scientists and pastors understand how the conversion process seems to work among the American population.

If you want to read the entire paper, you can download a copy here.