It’s been just over two weeks from election day, and the hot takes about what groups were the most important for Joe Biden’s victory have already filled up social media. I did a number of media appearances in the days after election day where I pointed to the switch in the votes of white Catholics being decisive for Joe Biden this time around. That was based on two things. My own analysis of tracking poll data from Data for Progress, but also some exit polling I had seen from AP’s Votecast.

But, I have to admit – the more I looked at exit polls, the muddier the picture became. What really began to shift my thinking is when Brian Schaeffner was kind enough to give us all a sneak peak of the 2020 CCES data concerning religion. And, in that data the white Catholic vote was right in line with their support of Trump four years earlier. However, there were some other shifts that quickly jumped out to me: the nones.

Huge h/t to @b_schaffner, we can do some CCES
comparisons.

THE NONES ARE THE STORY pic.twitter.com/mIO3lFYBqm

I was asked to talk about this with the American Atheists for their webinar on November 18th and wanted to write just a bit about some key things that I am seeing in the data and why I think that Joe Biden should thank the nones for being the president-elect right now.

Let’s begin by talking about where the nones have shifted in political and ideological space since 2008.

The purple circles represent the entire sample and the story there is of relatively consistency. The public, as a whole is just to the right of moderate on ideology and smack in the middle of partisanship. The nothing in particular group has bounced around in a pretty tight circle, and it would be fair to say that they are just slightly more moderate in 2019 vs 2008. Agnostics have seen a pretty significant shift leftward on ideology, however. In 2019, agnostics placed themselves in the same position in political space as atheists did in 2008. As for atheists, they shifted significantly toward the liberal label in 2018 and 2019. In 2019, there was no religious group that was as liberal as atheists. This seems to be a response to the Trump administration, which comes into sharper focus in the next graph.

The CCES asks respondents to place themselves on a seven point scale ranging from “very conservative” to “very liberal” as the endpoints. As just discussed, atheists an agnostics have been pulling hard to the left beginning in 2016, while at the same time they perceive the Democratic Party moving back toward the center and the GOP moving almost to the extreme conservative edge of ideological space. Agnostics also see the Democrats moving (slightly) toward the center, while they see themselves as becoming more liberal. In 2019, those two points have almost converged, and there is no daylight between Agnostics and the Democrats in the most recent data I have available. Agnostics don’t see the GOP as being as extreme as atheists do.

Nothing in particulars show a slightly different pattern. They see the Democrats as becoming slightly more liberal over time, and they also perceive the GOP as moving to the right of political space, though far less conservative than how atheists and agnostics view the GOP. When asked to place themselves, the nothing in particulars were fairly consistently just left of center from 2012 through 2016. But since the election of Donald Trump, they have been tracking more toward the Democratic Party, which seems key when thinking about the 2020 election.

This last graph is really where everything comes together. Now, we can see how all these ideological and partisan shifts made a difference at the ballot box. 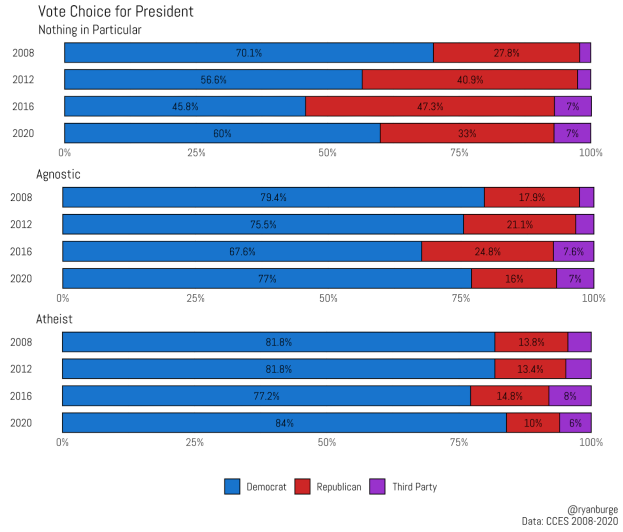 For nothing in particulars, they had been moving away from the Democratic nominee in significant numbers over the last three elections. Obama got 70% of this vote in 2008, but Clinton didn’t even win a majority of this bloc in 2016 (45.8%). However, according to preliminary analysis of the CCES 2020 data, Biden did 14 points better than Clinton and Trump did 14 points worse than he did in 2016. Consider the fact that over 20% of Americans identify as nothing in particular – that’s a huge swing in raw votes.

The trend away from the Democrats for agnostics was more subtle between 2008 and 2016, but then in 2020 there was a significant reversal. Clinton garnered just over ⅔ of the agnostic vote in 2016, but Biden did ten points better in 2020 – that’s nearly back to Obama’s level in 2008.

Finally, the atheist vote for Obama was rock solid at 81.8% in both 2008 and 2012. It slipped just a bit for Clinton in 2016, but that’s because the third party vote among atheists nearly doubled in 2016 compared to 2012. But in 2020, atheists came home in huge numbers and Biden did better with this group than Obama did twelve years earlier.

It’s a perilous exercise to determine how much these changes in voting behavior shifted voting totals because we don’t have a good sense of turnout for these groups just yet, but I think it’s completely fair to say that these shifts generated a two percentage point swing for Biden nationwide. There were five states where the gap between the candidates was less than two percentage points (Georgia, Arizona, Wisconsin, Pennsylvania, and North Carolina). Four of those five went for the Biden – and the nones were between 28 and 37% of the population in those key states.

I am left with the impression that a lot of the gains for Joe Biden were not because of anything that the Democratic candidate did. Instead, I think he garnered a larger share of the none’s votes because he was simply not Donald Trump. I am interested to see if the Democratic candidate in 2024 will see as much enthusiasm from this community as they mustered in 2020. If they stay home, or some switch their vote to the GOP, that makes a much narrower path to victory for Democrats in four years.