The Data is Clear – Episcopalians Are in Trouble

I was on the Holy Post podcast two weeks ago with the wonderful Phil Vischer, Skye Jethani, and Christian Taylor. I said a lot of stuff on there and made some pretty bold pronouncements. After going back to listen to it, I realize that I can seem hyperbolic at times, but a lot of what I say is grounded in the data that I have been analyzing every day for the last five years.

I wanted to zero in on one specific thing I said that rankled a few people: “The Episcopal Church will be dead in the next 20 years.”

Sounds pretty harsh, right? Yeah, okay, I will agree– it may have been an oversimplification in some ways. But, I wanted to put together a collection of graphs to indicate why I think that the ECUSA is in some serious, serious trouble. The reality is that the data is telling a pretty clear story. While the Episcopal tradition may not be completely gone in the near future, it will be vastly diminished.

Let’s start with really the key indicator – age. Episcopalians are old. In fact, of the twenty largest religious traditions in the 2017-2019 CCES, the ECUSA has the highest average age of any of those traditions. In 2018, the average respondent to the CCES was 48 years old. The average member of the Episcopal Church was a full ten years older (58.7).

The ridgeline graph is arranged so that the oldest traditions are at the bottom and the youngest traditions are at the top. The mean age for each tradition is noted by a vertical line. What’s worth pointing out is that of the oldest five religious traditions, four of them are from the mainline flavor of Protestant Christianity (ECUSA, UMC, PCUSA, and ELCA). The average Catholic is 50, the average nondenominational evangelical is 49, the average atheist is 42. You can see that visualized here.

But, when the method of analysis is switched from the mean to the mode (which is the age that shows up the most in the data), a terrifying reality emerges. The modal age of an Episcopalian in 2019 was 69 years old. That means if you took the membership rolls of every ECUSA church in the United States and grabbed a random person from that spreadsheet, the most likely age of that person would be 69. For a Mormon, the modal age is 29. For a Southern Baptist, it’s 60. You can see that here.

Generational replacement is the key factor that buoys the size of churches. As older people die off, they are replaced by children in the congregation moving into adulthood. But in the case of the ECUSA, that seems incredibly unlikely. Here’s why: 55% of all members of the Episcopal church are at least sixty years old. If life expectancy stays around 78 years old, that means that the average Episcopal church would lose half its current membership through death by 2040. Are there enough children to make up for those losses? Again, the data says that is unlikely. 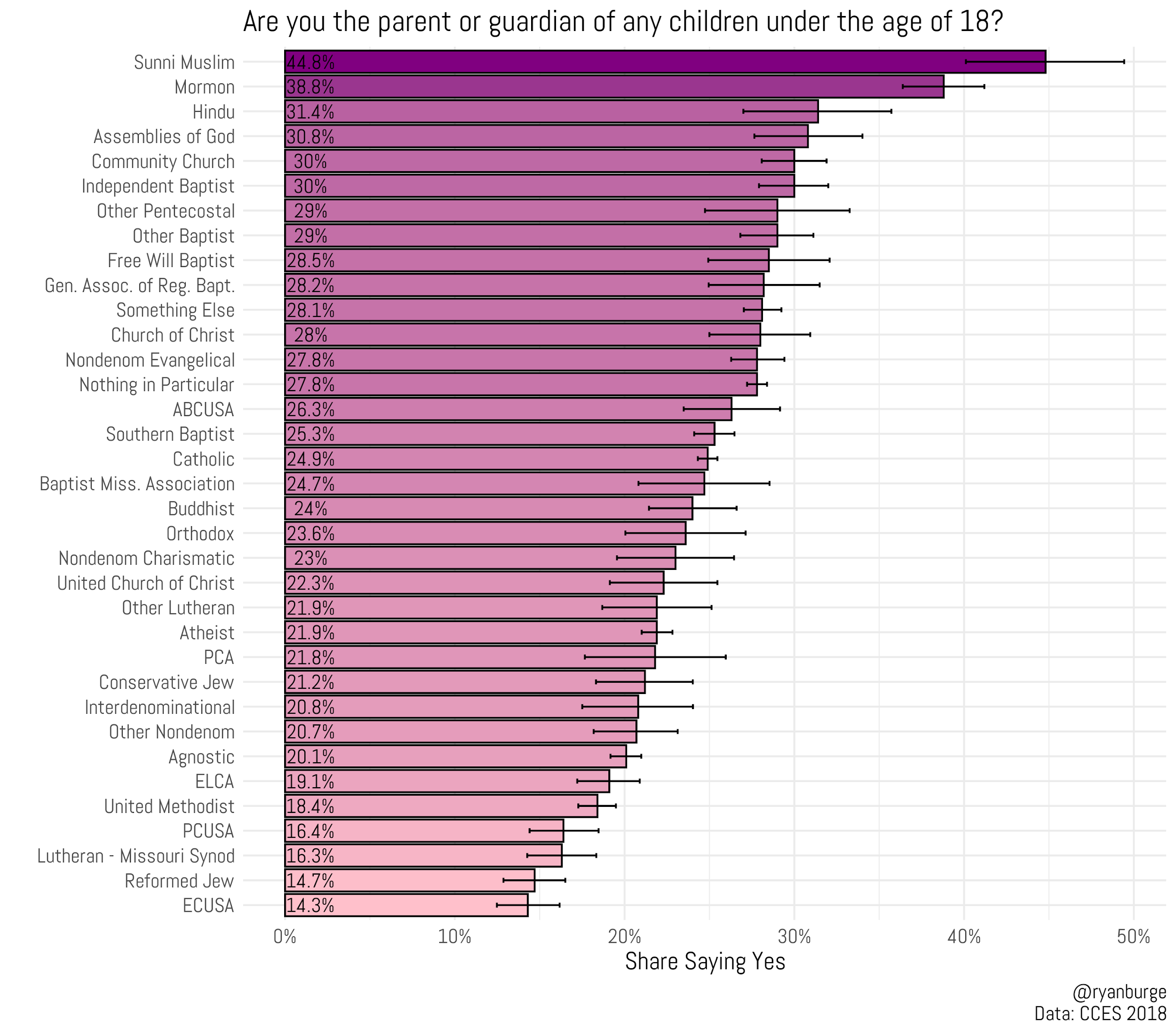 According to the 2018 CCES, just 14% of all Episcopalians say that they are the parents or guardians of a child under the age of 18. That’s lower than any other religious tradition that I analyzed in the dataset. And, while I don’t have a big sample of ECUSA parents to draw from, 85% of Episcopalians who had children at home had just one or two children – not enough to even reach replacement level. That reality is compounded when you consider the issue of retention rates – which is the share of people who stay in the same tradition in which they were raised. Some analysis I’ve conducted indicates that mainline retention is only 68% now.

What makes matters scarier is that the ECUSA has already seen a dramatic decline in membership before reaching the aforementioned age cliff. To get sense of how the church has already declined, I compared the number of Episcopalians per county in 2000 vs 2010 using the Religion Census. The counties where there were fewer Episcopalians in 2010 than in 2000 are filled in with yellow, those that gained adherents are colored in blue.

Clearly, the yellow counties are outnumbering the blue ones. The data indicates that for every county that gained Episcopalians between 2000 and 2010, three counties lost adherents during that same time period. And, it’s worth pointing out where those losses are especially acute – New England, the Rust Belt, and the West Coast. These are the places that used to be the stronghold of more liberal religious traditions, but now they are being hollowed out.

I think it’s useful to compare two religious traditions that are essentially the same share of the population in 2018 – the Episcopal Church and the Church of Latter-day Saints. In 2018, they were both 1.4% of the population. However, their trajectories are totally different. The average Mormon is 43. The average Episcopalian is 58. 39% of Mormons have kids in the household under the age of 18, but it’s 14% of Episcopalians. 85% of Episcopalians who have children, have two or less. It’s only 60% of Mormons.

If we check back in ten years it’s fair to assume that there might be twice as many Latter-day Saints in the United States as Episcopalians. In fact, I think the data makes a strong case that the ECUSA will be half its size by 2040 – down to just .7% of the population. How small is that? That’s the same size that Buddhists, Muslims, or Hindus are currently.

So, while the Episcopalians may not be dead in 20 years, they will very likely be on life support.