Are Evangelicals Exceptional in their Sexual Abuse Beliefs?

The report on sexual abuse and its coverup within the Southern Baptist Convention broke this week to stunned reactions, at least within evangelicalism. After years of #MeToo, many were not surprised that there was sexual abuse rampant within the denomination, but perhaps many were rattled by the degree to which denominational officers knew about it, documented it, went after victims, worried about lawsuits, and hid behind church polity. Russell Moore, a former star of the denomination, called it the “Southern Baptist Apocalypse.”

We do not yet have opinion data about what the American people think of the latest revelations in what has become a fixture of American religion – there will be sex scandals. But have asked what Americans think about sexual abuse scandals and American religion. The data come from a survey administered to 1,000 adults fielded by Qualtrics Panels in July 2021 with Census-based quotas to help the sample resemble the nation.

Perhaps it’s not surprising at this stage that a plurality of Americans believe that “Young people who grew up in a religious household are more likely to face emotional, physical or spiritual abuse than those who grew up without religion.” A third are noncommittal, while only 27 percent of this sample musters disagreement. We see a similar pattern when we asked if “Sexual abuse of children is more likely to occur in churches than in schools or daycares” – again 37 percent agree while the same percentage are on the fence and only 26 percent disagree.

We are particularly interested to see if Protestants, especially evangelicals, believed in their own exceptionalism – that sexual abuse simply didn’t happen in Protestant churches. The steady accumulation of evidence of scandals across American religion should speak to the contrary, but they have not hit a denomination-level organization like it had the Catholic Church. In the population, 40 percent believe that the Catholic Church is unique and just as many just don’t know. But there is much more agreement (67 percent) that the Catholic response to the sexual abuse crisis has done long-term damage to American religion.

Is there a varied response about the Catholic Church from religious traditions? Only to an extent (see below). Not surprisingly, evangelicals and Black Protestants are both near the top of the list in believing the Catholic Church to be unique in its level of sexual abuse (~45 percent agree). But Catholics, themselves, are not far behind (38 percent agree), suggesting that the pattern is primarily about information and there have been multiple floods about the Catholic Church’s complicity in this evil. It is interesting to note that non-denominationals are distinctive from evangelicals – far fewer agree, which may reflect that a good number of them are ex-Catholics.

Overall, 39 percent agree that “High profile sexual misconduct by clergy has turned me off of religion.” What is interesting about that figure is that it is spread across American religion as the following figure shows. It is no surprise to see the non-religious near the top (45 percent), but trailing just behind them are Catholics (42 percent). Fully 27 percent of evangelicals (and non-denominationals) admit that sexual abuse scandals have turned them off of religion too. No religious tradition has less than a quarter of its membership turned off by abuse. That is a massive number of people affected, which is perhaps the only appropriate response.

Does that sentiment matter? It can matter in a number of ways, of course, including looking to build institutions that the SBC is now discussing to protect the innocent and prosecute the guilty, or it could mean creating some distance with organized religion. Of course, it may not affect religiosity at all if there is no uncovered abuse in one’s own congregation. We can only explore one possible ramification here – is feeling turned off of religion linked to reduced worship attendance? The answer is only in some cases. There is no systematic link among evangelicals and Black Protestants (and mainline Protestants make a bird shape with reduced attendance among those who say “neither agree nor disagree”). But there is a decline among Catholics, non-denominationals, and the unclassifieds as they come to feel turned off by sex abuse scandals. Catholics, for instance, drop from nearly weekly attendance to only a few times a year – a drop of potentially many dozens of masses a year. There isn’t an effect among the non-religious mostly because of “floor effects” – there’s no room left to drop because their attendance rates are already so low. 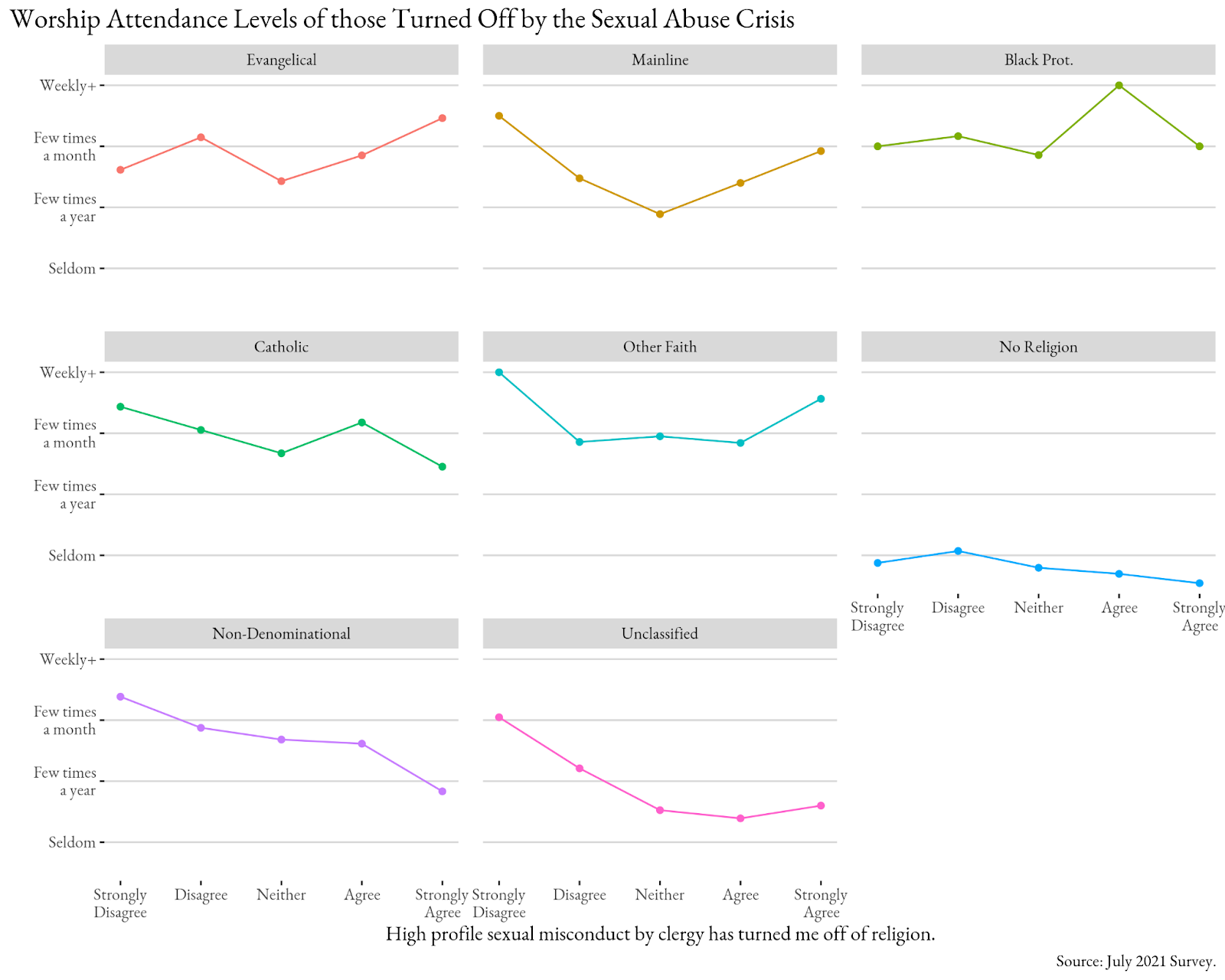 We have yet to see the effects of the SBC bombshell report, of course, but that doesn’t prevent us from speculating. It should strip the varnish from many Protestant denominations (that was already faded, given our evidence above). It is abundantly clear that the potential for sexual abuse is everywhere and these Christian institutions are not immune and are not better at handling them. The SBC has already been losing membership steadily over the last twenty years and this will exacerbate that trend, nudging out members who were marginally affiliated. It may spell an apocalypse for the SBC itself, but it should be a wake-up call for many other religious groups who once thought themselves immune.