Once thought to be the shining city on a hill that defied the secularization thesis, the United States has been going through a profound change in losing its religion. There are so many important questions to ask as changes in religion are linked to so many facets of life. Obviously, we are trained on the political ramifications of religious disaffiliation, while others investigate questions linked to the family, social relations, individualism, happiness, and many more. Here’s the trick – for many years research in the US and elsewhere has found religious involvement linked to a host of individual and pro-social goods. Is that still true? Is the rapid growth of the nones linked to anti-social, individualistic attitudes and behaviors?

One recent entrant in this field hones in on a particular subset of the non-religious – those who still identify as religious but no longer attend. As he puts it in the piece,

We’ve seen other variants of this work that suggest that attenders are not to blame for Trumpism; it’s actually the non-religious who are his strongest supporters and the most enthused by his policies. We have debunked these notions before (such as here), which often rely on peculiar interpretations of survey data, data from very early in the 2016 primaries, and social desirability bias. But this one is new and worth a look and we used the huge 2020 Cooperative Election Study to do it.

There are several components to unpack here. The first is the southern focus. It’s not clear to us why the south was singled out since the church attendance rates of white Protestants are pretty similar across regions – from 31% seldom/never in the South to 38% in the northeast. We’re mostly going to use all regions (the patterns look similar if we separate the data by region).

One of the claims is that identifiers have “retained their conservatism.” We evaluate this in a few ways, first looking at their presidential votes from 2008-2020 compared to weekly+ attenders. The split has actually changed quite a bit over this time period, in part because the 2008 election is an outlier, with Barack Obama gaining a greater than expected victory over John McCain. From 2012 on, the gap between low and high attending white Protestants has been much smaller. In the South, weekly+ attenders were 15 percentage points more Republican than low attenders, which shrank a bit to 13 points in 2020. In the Midwest, the gap shrank much more – from 24 points in 2012 to 11 in 2020. It largely maintained in the West – dipping from 19 to 18 points over this time period.

It is no surprise to us that white and Christian grievance narratives from Trump’s Republican Party would pull more white Protestant identifiers to the GOP over this time period. We would also point to Burge’s novel finding that “evangelical” has become a political label in this time period that conservatives adopt regardless of their Christian identity. There are, for instance, a considerable number of Muslim conservatives who call themselves evangelical in 2020. Either way, there isn’t much evidence here that Southern low attenders are considerably different from their peers in other regions. It is also clear that voter groups respond to the political environment in shaping their political choices and affiliations that belies a notion that low attenders simply retain their conservatism. 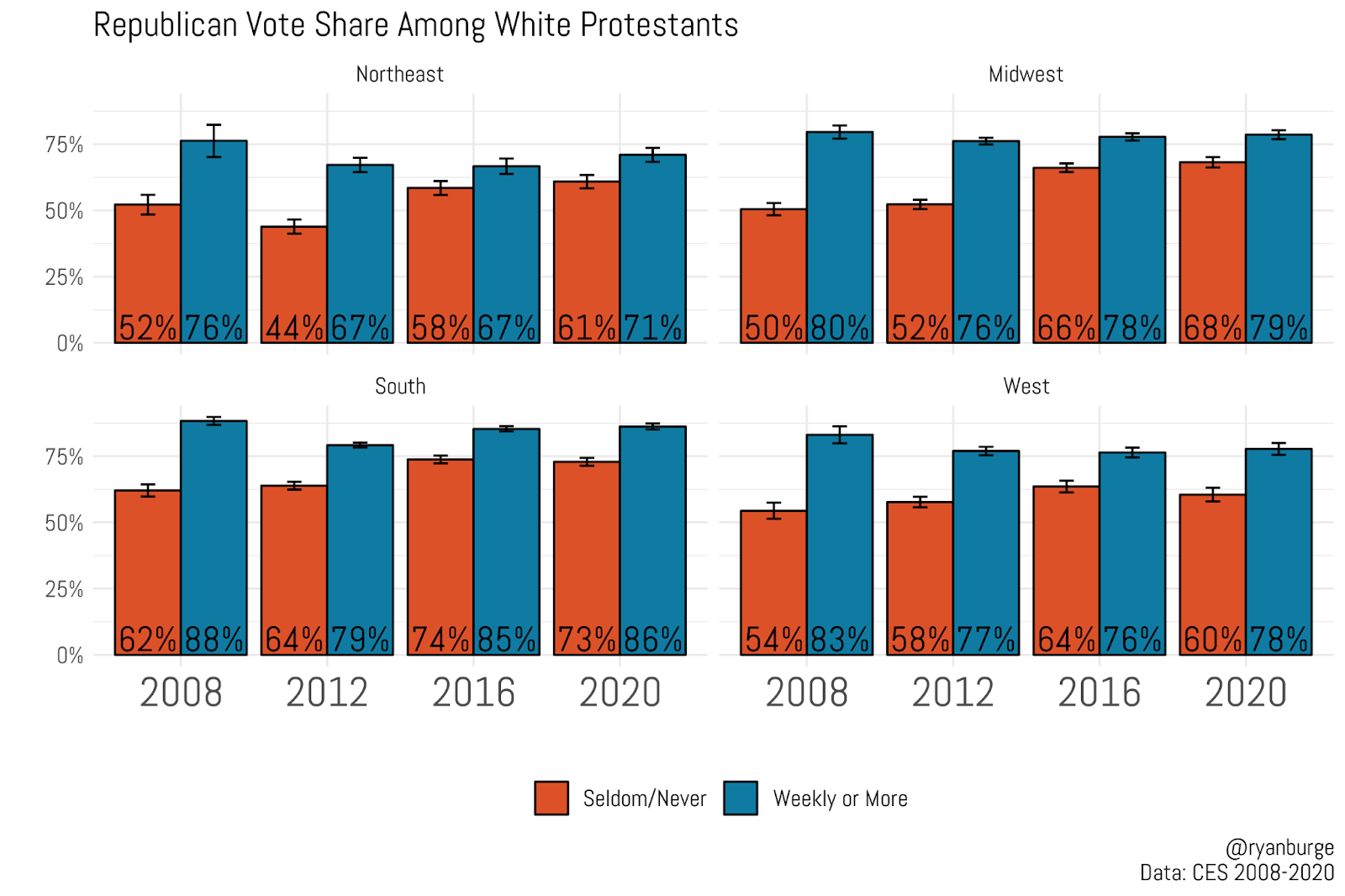 Another way to think about any sense of a retained conservatism is to look at a range of policy issues that can tap moralism, individualism, and respect for law and order – these were, we suspect, composed this way as a definition of Trumpism, minus the ethno and Christian nationalisms. Williams argues that low attending Protestants are just as likely to oppose abortion as high attenders, which is something we just don’t find. Low attenders are considerably more likely to support abortion as a choice – the gap is roughly 20 points with high attenders and that gap has remained constant since 2008 even though the support levels have fluctuated.

The remainder of the policies show gaps with high attenders that suggest that the low attenders are more liberal. Low attenders are ~10 points more likely to want to ban assault weapons, are less supportive (by ~ 15 points) of banning transgender people from the military, are ~15 points more supportive of raising the minimum wage, and have been increasingly willing to remove Trump from office. The one exception is immigration, where just over half of both low and high attenders have wanted to cut legal immigration by half. With that one exception, the rest of the evidence simply shows that low attenders are more liberal and about equally across the policy board.

We thought it would be useful to look a bit deeper at a particular policy area – health care – that combines tensions about individualism and collective concern. Fortunately, the CES had a sizable battery about this and we split it out by region so we could come back to the implicit claim that southern low attending Protestants present a growing threat or crisis facing the United States. The results below do not support a sense of low attenders being alienated. Again, they suggest that low attendingwhite Protestants are a bit more liberal than their high attending peers.

There’s universal agreement with the new law that the government can negotiate drug prices and very strong majority support by both low and high attenders for the ability to import drugs to control prices. In the remainder of the policies, low attenders take the more liberal position. Fewer low attenders by 10-12% want to the repeal the Affordable Care Act, though that portion rises to above 60 percent among Southern white, low attending Protestants (74% for high attenders). More want to expand Medicare for all, including in the South, and more would lower the eligibility age for Medicare from 65 to 50. What we find particularly interesting is that more low attenders overall would restore the individual mandate. That gap is not huge, but it is certainly not consistent with a label of hyper-individualistic.

From the evidence we’ve amassed, we find it quite difficult to square it with Williams’ summary of his:

Instead, low attenders in 2020 appear to be more supportive of gun control, abortion rights, removing Trump, and other liberal positions. They are less religious and appear to be less moralistic. There certainly is not evidence to suggest that they have lost any willingness to care for other people. Quite the opposite. In fact, they look close to the religious nones, for whom one reason why they tend to leave congregations is because of political disagreement. There’s certainly a lot of grist for that mill here.

Paul A. Djupe directs the Data for Political Research program at Denison University, is an affiliated scholar with PRRI, the series editor of Religious Engagement in Democratic Politics (Temple), and co-creator of religioninpublic.blog. Further information about his work can be found at his website and on Twitter.