American Muslims: The Core of the Democratic Party?

When we talk about the Democratic Party these days, we tend to think of women, younger voters, urban dwellers, liberals, and racial minorities. We should also think of Muslims. So much has happened since 2016 that it is hard to remember it all, but the 2016 election certainly helped to drive Muslims into the Democratic camp, where they had strongly leaned since the ugly aftermath of the September 11, 2001 attacks that saw majorities of American Muslims reporting prejudice and discrimination from their fellow Americans. In 2015-2016, Trump called for a Muslim registry, kicking Muslim refugees out of the country and blocking more from coming, closing mosques, and for taking out the families of terrorist Muslims. Saying “I think Islam hates us,” he also falsely recalled seeing American Muslims in New Jersey cheering the fall of the World Trade Center towers. Of course, upon taking office, he rolled out his promised Muslim ban that is still in the courts.

So, it’s a good time to take stock of the political commitments of American Muslims. Given their treatment by the standard bearer of the Republican Party, we would not be surprised if their party affiliation was out front of their attitudes, which historically have been, shall we say, statist. That is, they have historically been socially conservative, opposing abortion and gay marriage, while favoring a strong safety net.

We are aided, as usual, by the Cooperative Congressional Election Study that, with its enormous sample size, affords us enough Muslim respondents to analyze (485) – something most surveys of conventional size (2,000 or less) simply do not have. Muslims only make up, by this estimate, less than 1% of the adult population.

That yields an estimate of about 2 million adults (over 18), which is surely an undercount for reasons of language and age. Muslims are very young as the following figure shows. The mean age is just 35.6 which is quite young compared to 56.6 for mainline Protestants.

The figure below shows how the different Muslim denominations are distributed in the US and the pattern resonates with world distributions – a majority are Sunnis, with Shia Muslims a distant fourth. A source of some of the most severe conflict in the Middle East, Sunni (e.g., Saudi Arabia, Iraq) and Shia Muslims (e.g., Iran) disagreed initially over who should have succeeded the prophet Muhammed in the 7th century after his death (the latter argued for a blood relative) and have since differentiated themselves in other consequential religious and geopolitical ways. Of course, the Nation of Islam is also represented as an original American creation – an Islamic organization created by and for African Americans. Previous estimates have pegged the NOI at a quarter of the Muslim population, which is not far off the mark of 19% of Muslims in the US in 2016.

Given the context of the 2016 elections and the treatment of Muslims by members of the Republican Party over the last decade and a half, it is no surprise at all that Muslims voted overwhelmingly (81.2%) for Hillary Clinton. Trump yielded just 13.7% and Stein’s share was a mere 3.7%. These distributions are NOT uniform across the four denominational groups. While, perhaps remarkably, Sunnis and Shias shared a common set of vote preferences (about a tenth voted for Trump), the others did not. Fully a third of Nation of Islam affiliates reported a Trump vote, as did a PLURALITY (49%) of other Muslims (who tended to identify as “just Muslim”).

The very high rates of Democratic voting are linked to a more foundational identity as a Democrat. In fact, at this point, Muslims are the most Democratic identifying religious group. They are more Democratic than Atheists, Hindus, Buddhists, and Jews. Moreover, unlike the vote distributions which had some internal variance, the Muslim denominations hold equivalent levels of Democratic identification – all four fall between not strong Democrat and independent leaning Democrat. 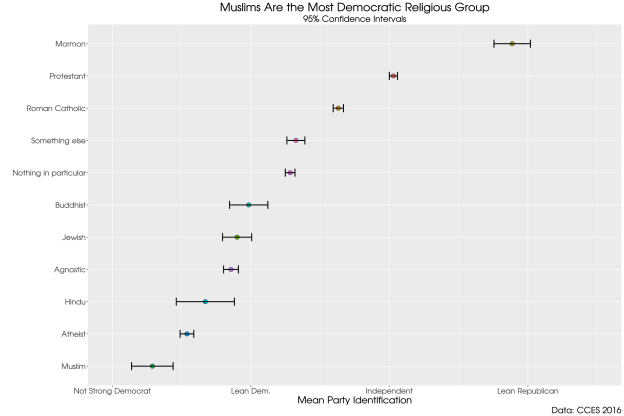 But, as we tipped off in the beginning, Muslims may not be the most liberal group in the nation. That is, we expect that their treatment by Republicans has probably pushed them to be more Democratic than they otherwise would be given their mix of “statist” views that back state restrictions on morality violations and state support for health and welfare.

The figure below shows how Muslim self-described ideology lines up with their partisanship. Nearly every group follows monotonically on a line from conservative to liberal matching their Republican to Democratic party affiliation. But Muslims fall substantially off of that line — they are much more moderate than their Democratic leaning would suggest. Interestingly, Atheists are more liberal than their party affiliation would suggest, which follows since they have not been warmly embraced by the Democratic Party.

At one point in the late 1990s, Muslims were about evenly divided in their vote selection and had a slim plurality that voted for George W. Bush in 2000. Muslims were simply not on the political radar screen, their views did not align with either party, and their high socio-economic status tended to push Republican voting.

Not now. Since late 2001, Muslims in America have heavily favored Democratic candidates, which places them in the same camp as racial minorities who tend to be religious and have socially conservative views, but side with the Democrats as the party of robust rights protections. Buttressed by protective organizations that have cultivated a pan-Muslim identity in the US, we see this as a trend that will continue well into the future as Trump’s Party pursues a social identity strategy designed to minimize the size and maximize the commitment of its base.

The syntax for this analysis available on Github.