The 2016 Jewish Vote and the Culture Wars

“We have seen this before.” In the ad run by Bend the Arc Jewish Action in the fall of 2016, Jewish grandparents warn their grandchildren about Donald Trump by making parallels to Nazi Germany. Trump’s anti-immigrant, anti-Muslim, and racist language coupled with tweeting out anti-Semitic images and receiving the enthusiastic endorsements of white supremacists gave an awful lot of fodder to those making the parallels. But there is another layer to this particular story that I would like to focus on.

The narrative structure of Jewish elders reminding younger generations about their history fits what we know about the fraying bonds of the Jewish community in the United States. Just as de jure and de facto anti-Semitism waned (unevenly) after World War II, intermarriage rates and secularization accelerated to take their toll on Jewish identity and adherence. The worry, among some, has been that American liberalism, with its strong willed individualism, contained the logic that would unwind group solidarity. Therefore, elders (in the ad) remind the young what constellation of horrible forces brought them to the United States in the first place and why they became liberals.

Did voting records in 2016 affirm that image? Did the young break with American Jewish tradition and vote at higher rates for Donald Trump? Was support lowest among those born closer in time to Nazi Germany? Did the American Jewish community remain united in their historic liberalism and oppose Trump?

At one time, it was incredibly hard to study the political behavior of Jews. At about 2 percent of the population estimated by Pew as well as in the data I’m about to introduce, most surveys simply do not have more than a couple dozen respondents to study. However, the Cooperative Congressional Election Study has enormous samples with more than a thousand Jewish respondents to study. In 2016, there are more than 1,700 Jews in the sample (!), whom we can classify by the movement they identify with – 46% Reform, 29% Conservative, 10% Orthodox, 2.5% Reconstructionist, and the remaining 12% a variety of “other” responses (responses were weighted). What we gain in numbers we suffer in depth of questioning, but we can still address the broad contours of these questions.

It is entirely possible that the Bend the Arc campaign worked to encourage Jewish support for Clinton. The American Jewish Committee released a survey in September that estimated 61 percent support for Clinton (19% for Trump). Post election, fully 68 percent of CCES Jewish respondents favored Clinton (27% for Trump). Clearly the undecided voters in September broke about evenly for the two candidates, though I would be hesitant to make much of this comparison since the samples are quite different. This estimate is quite close to the 71% from Pew, 70% from J Street, and 71% from the NYT exit polls. And while this is a very high level of support for the Democrats, the group religious most supportive of Democrats in 2016 was American Muslims.

The level of Jewish support given to Hillary Clinton was not terribly low by historical standards. Support for the Democratic candidates through the 1990s and 2000s was typically over 70 percent and Clinton’s support came just underneath that, right where support for Obama in 2012 was.

Anyway, this high level of support for Clinton hides considerable variance within the community. 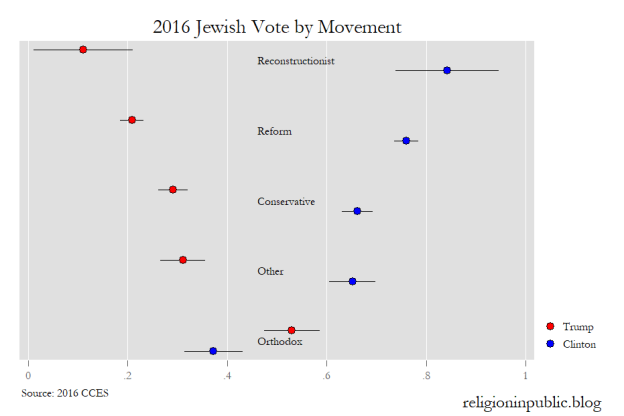 The figure above breaks out the vote by movement identification. It is no surprise that the Reconstructionists are the most Democratic, followed by Reform identifiers. About 80 percent of each supported Clinton. Both Conservatives and “Others” also broke for Clinton strongly (two-thirds of each).

One approach maintains the crucial linkage to support for Israel, considered the sine qua non issue for throwing political support. The Democrats are sometimes seen as more friendly to the plight of Palestinians, though Democratic presidential candidates are always vocal supporters of Israel. Trump broke with Republican tradition to favor an isolationist foreign policy and mentioned making Israel pay for US defense costs, but Republicans, guided by evangelical fervor for Israel as the place of the Second Coming, have been staunch supporters of Israel.

Another approach highlights the tribal nature of American politics – partisan identities are less concerned with policy agreement than affinity for “people like me.” If Democrats are the party of city dwellers, the educated, and racial minorities, then Republicans are the party of less educated whites in rural areas. Affiliates of the two parties have more attitudes in common than they realize, but they sure are clear in their animosity for the other side. At least according to JJ Goldberg writing in The Forward, “[T]he Republican Party is the natural home for Orthodox Jews. It goes way beyond Israel. Belief in innate difference and tribal solidarity has deep roots in Orthodoxy.”

A third approach prioritizes issue agreement. It may seem quaint in the context of the 2016 election, but the candidates did actually have policy opinions and they disagreed on important matters of public policy, including abortion, same-sex marriage (though pinning Trump down on this proved difficult), health care provision, taxes, foreign policy, and many others. It is at least possible that the vote could be linked to voter interests.

The CCES did not include a question about support for Israel, so it is possible that attitude works similarly to these “culture war” issues. But, if support for Israel is at the core of allocating political support, I don’t think we would find these patterns or that support for abortion and same-sex marriage would be so tightly correlated with support for Israel, especially among the Orthodox. Another way of thinking about these results is that they indicate how even “tribal” groups are pulled into the vortex of American politics. That does not mean groups abandon their particular concerns, such as for Israel, but they allocate partisan affiliations along the issue lines that divide the parties.

Let’s finish by examining how Jewish grandparents voted. Shown in the figure below are the voting rates for each of the big three movements across the age spans in the data (the highest is actually 93, but it’s sparse up there). In all three cases, the young were the least likely to support Trump – near zero among Reform identifiers – and it was their elders that were much more likely to support him. Nearly 80 percent of the oldest Orthodox voters supported Trump compared to a narrow majority of middle aged and younger Orthodox Jews. If effectively no young Reform voters supported Trump, over 20 percent of baby boomer Reform voters did. Perhaps the ads from Bend the Arc’s grandparents were trying to reach their children rather than their grandchildren. 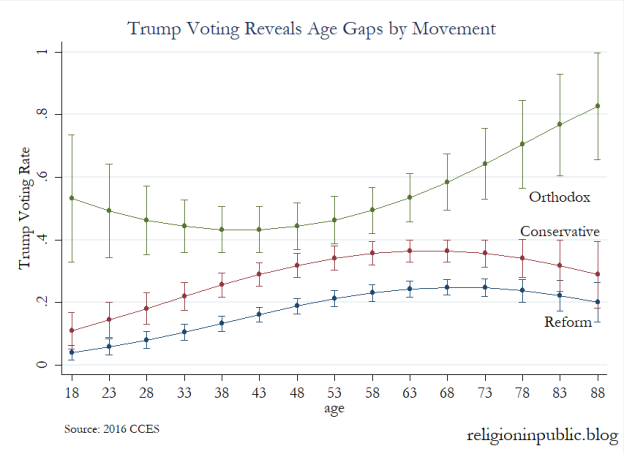 Orthodox Jews continue going their own way, but also appear to be making vote decisions based on traditional culture war issues. The young are actually more in line with traditional Jewish voting patterns AND have at least one of the mechanisms in place to sustain it for now. That is, synagogue attendance is actually higher among the young in the Reform and Conservative movements as the graph below shows. Will they follow their elders into weakened religious attachment and more dispersed political choices?