Exvangelicals – A Note on Size and Sources

We are both exvangelicals. Raised in evangelical churches, we both de-identified from evangelicalism, though at different times in their lives. And one of us de-identified from religion altogether. This is not an uncommon experience among Americans and exvangelicals are becoming more vocal about their experience and with their criticisms of evangelicalism’s perceived wayward path. Empty the Pews is a collection of essays about leaving American Christianity, for instance, and take a listen to Blake Chastain’s podcast called exvangelical.

While we might have a lot to say about evangelicalism personally, our professional mission is to count things and look for associations. How many exvangelicals are there? How often are evangelicals disaffiliating (leaving a particular congregation) and de-identifying (leaving an identity) and why? Fortunately we have new as well as existing data that help us build a more complete, if still unfinished, picture.

It is important to note that there are effectively no religious groups who participate in mainstream society that do not suffer membership attrition from childhood (age 16). The exvangelical phenomenon is repeated across all groups in the General Social Survey at an increasing clip. The only group that is attaining greater retention rates are the nones; in the 1970s, the vast majority of those raised as nones found religion at some point. However, by 2018, a strong majority (62%) raised non-religious are staying that way. Compared to other groups, evangelicalism is doing well. If mainline Protestant and Catholic retention rates have dipped 20 percent since the 1970s, retention has only dipped 5 points among evangelicals so they are retaining 70 percent. Jews have only lost 3 percent.

From this perspective, 4-5.5 percent of the population can be classified as exvangelical and that rate is steady across the years of the GSS. That means that evangelicalism would be about 15-20 percent larger if there were no exvangelicals. 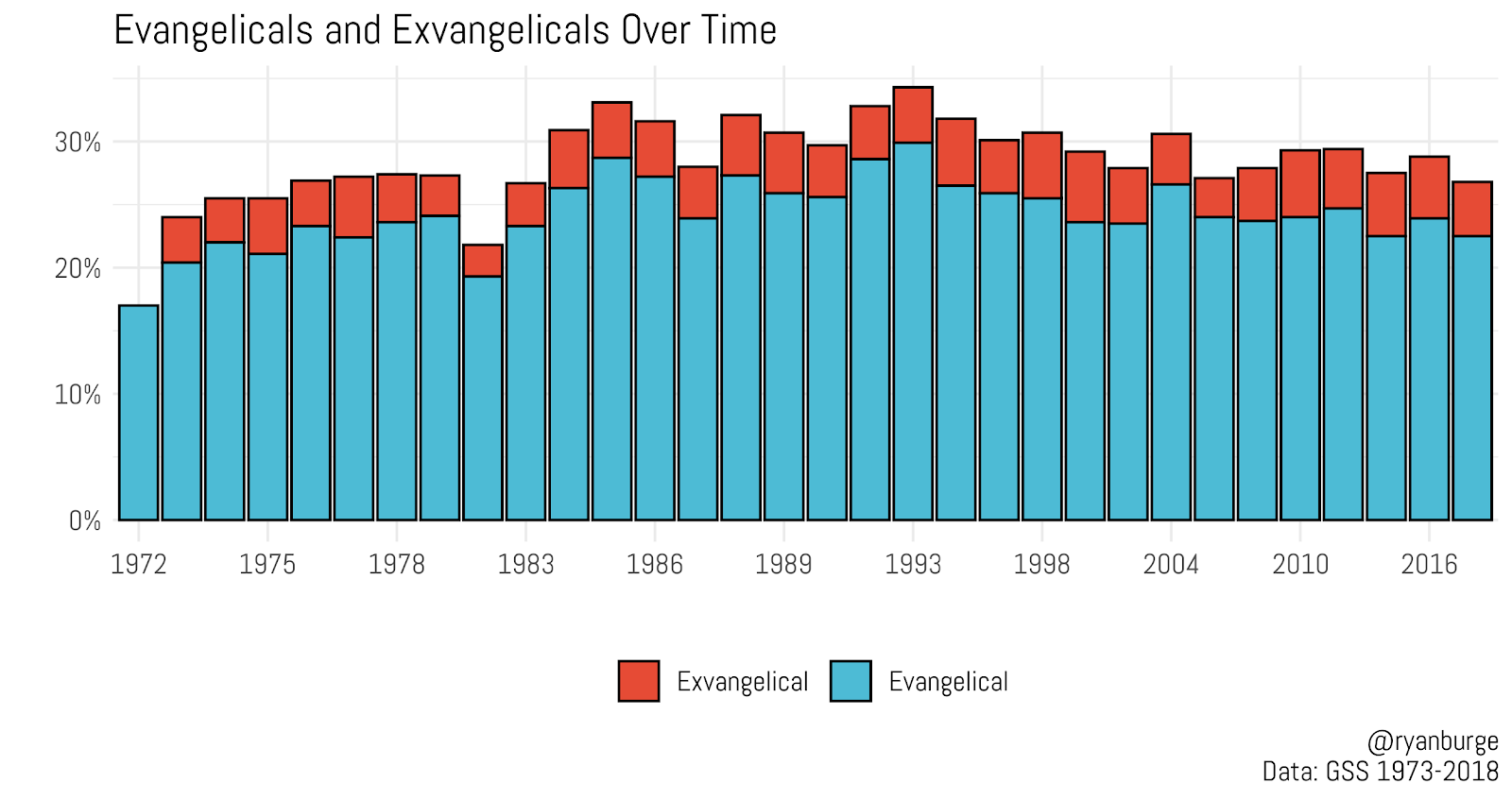 For instance, 69% of people who were raised evangelical were still evangelical among the 18 to 35 year old age group. For those 65+, retention was only two percentage points higher. That gap is the lowest of any Christian tradition. For both mainline and Catholics, it’s closer to eight points. The only real deviation is the nones – younger people who were raised none are much more likely to still be a none than their older counterparts.

In our March survey, we used a more recent benchmark that focused on evangelicals: “Would you have described yourself as a “born-again” or evangelical Christian five years ago, or not?” (emphasis added). In these data, 3.4% of the population is composed of exvangelicals – those evangelical five years ago who are no longer identified. That number is very close to what we estimated from the General Social Survey. Of course, this is a fluid category, so while some people are de-identifying, others are identifying compared to what they were five years ago (in these data, that figure is 5.6 percent).

Our intent with this survey was to assess the effect of the Trump presidency on identification. There are clearly other categories, but the following figure focuses on those who identified as evangelical five years ago. The vast majority retained that identification, especially among Republicans (only 5 percent de-identified). However, others were much more likely to de-identify – more than double the Republican rate for Democrats (11 percent) and triple the Republican rate for Independents (17 percent). It seems clear that the politics linked to evangelicalism have taken a toll on those who do not wish a political connection. From the perspective of academic research, this is not a surprising pattern. 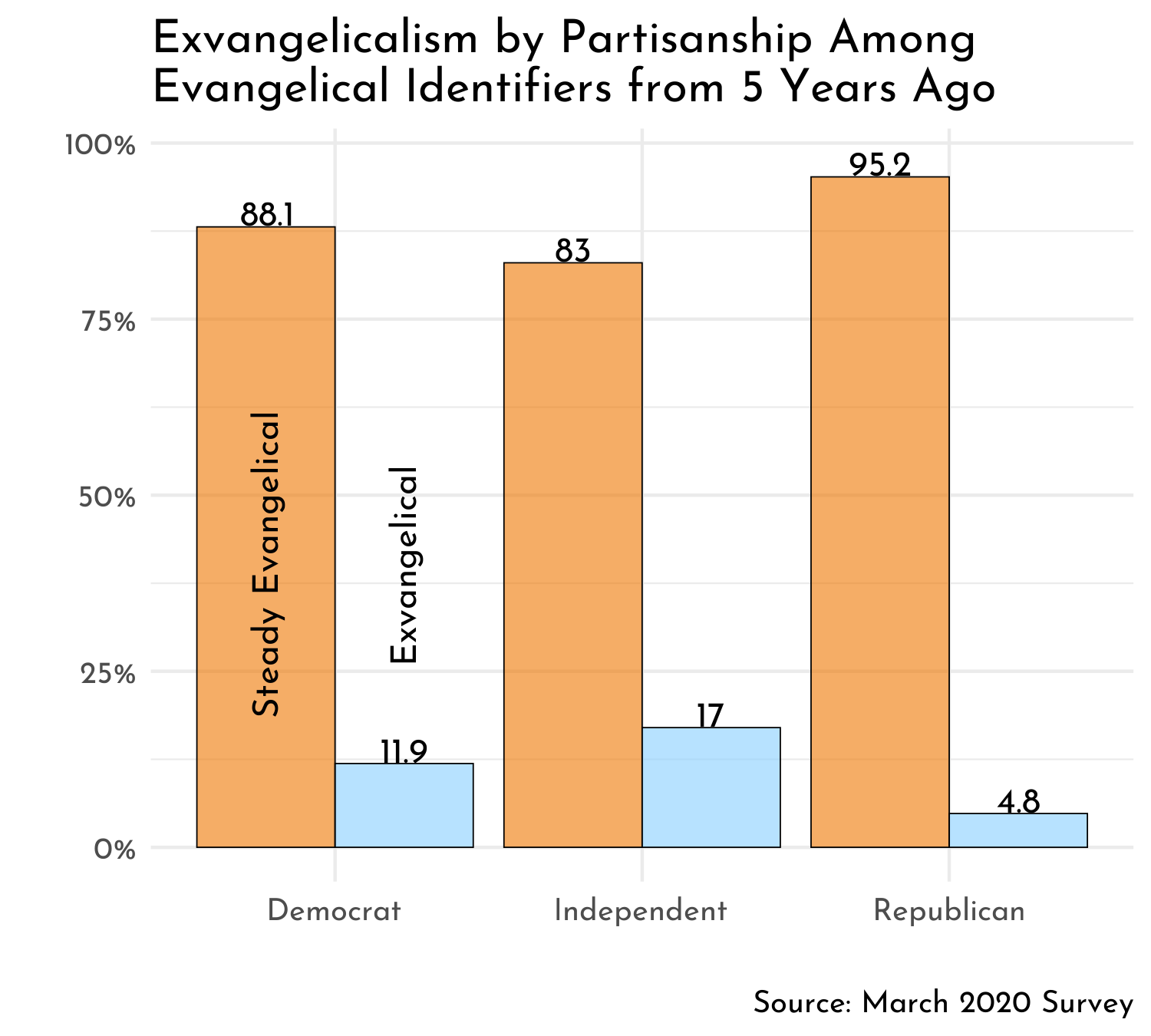 Long ago by now, the old ethnic, geographic, and other barriers holding people in religious place began to fade in what is called the “decline of denominationalism.” They left family churches and began to shop for a new church home. As I put it 21 years ago, once brand loyalty in one domain is lost, it is likely to have cascading effects so switching is common across domains. Once put in motion, people are more likely to remain so. That’s what the figure shows – exvangelicals were twice as likely to say in March 2020 that they’ve left a congregation they were attending in the Fall of 2019 (compared to the rate for steady evangelicals). Notably, this goes both ways, so those changing their religious identity to evangelical from something else were also switchers at a relatively high rate. It is also interesting to see that the average rate looks similar to what we’ve found before over short time spans – 10-15 percent are switching on the regular.

The typical assumption these days is that people who leave congregations will shop around until they find one with a good fit, especially a good political fit. That would certainly seem to be the public story for exvangelicals, though there are many reasons why people left that identity. We’re here to say that the evidence for that is weak at best – effectively everyone sees their clergy as more moderate than they are (the measure starts with their 0-100 feeling thermometer score and then subtracts where they place their clergy on the same scale in their support for Trump). Democrats see themselves as less supportive of Trump than their clergy are; Republicans say they are more supportive of Trump than their clergy are. And exvangelicals show some of the biggest gaps with their current clergy. There’s one exception – Republican exvangelicals – who say that their clergy now have the same view of Trump as they do. It’s also worth noting that steady evangelicals appear to have the lowest difference in perceived opinion with their clergy over Trump – it’s about half the size of the gap exvangelicals report. That could be consistent with a story that exvangelicals are helping make evangelicalism more homogeneous.

Even if the modal category of religious belonging is stasis, there is tremendous churn in the religious economy. Exvangelicals are relatively new entrants into this scene, having come from a religious tradition from which hails some of the highest retention rates. Once those bonds are broken, in part by political difference, exvangelicals are mobile, more likely to switch congregations than others. From clergy’s perspective, they expect that more than 10 percent of their congregations are uprooting every several months for one reason or another. This helps explain their appearance of moderation and their general conflict avoidance in their fragile communities. We’ve been seeing evidence of this for years, and only expect it will continue – the more dynamism in religious switching should be accompanied by the avoidance of politics.