Has Donald Trump Pushed Catholics to the Left?

A few weeks ago I got my hands on some terrific survey data that was collected in November of 2018, giving me the opportunity to see how the election of President Trump has impacted the religious landscape in the United States. Two weeks ago I took a look at white evangelical Protestants and found that not only had there been no electoral backlash towards Trump, but instead evangelicals showed high levels of support for his presidency and were identifying more strongly with Republicans in 2018 than they had in the previous ten years. It was a surprising outcome.

However, evangelical Christians are not the largest religious group in the United States. According to the 2016 CCES data, 21.5% of U.S. citizens identify as Catholic which runs second the proportion of Protestants (35.4%). While evangelicalism has long been tied closely to white racial identity, the Catholic Church is quickly becoming more racially diverse. In fact the 2016 CCES indicates that over a quarter of all Catholics do not identify as white (26.8%). With the increasing politicization of racial identity in American politics, it seems worthwhile to look at Catholics who are white and non-white to see if the Church is experiencing any shifts in partisanship based on racial identity. 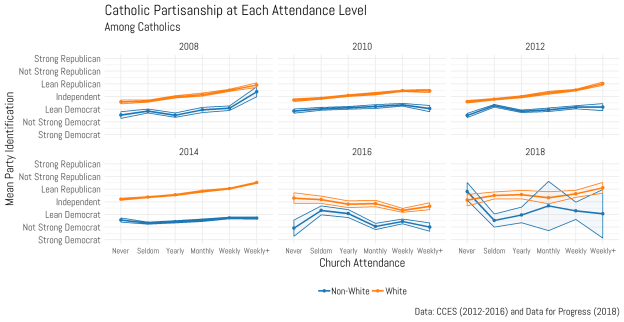 The graph above displays how the average Catholic identifies on a seven-point partisanship scale based on frequency of church attendance with white catholics indicated by orange lines and Catholics of color displayed as blue lines. The pattern between 2008 and 2014 is remarkably stable. It’s clear that white Catholics moved closer to the Republican party the more they attended church, while non-white Catholics were essentially the same across the attendance spectrum. The 2016 election provided a different outcome, however. Note that the average partisanship for white Catholics who never attended is basically the same across all six survey waves, however in 2016 instead of the line going up (toward the Republicans), the line actually moves slightly downward. In effect, the white Catholics who attended church more than once a week were actually slightly more Democratic than those who never attended. The last panel uses 2018 data from Data for Progress and, while the sample is smaller, the pattern seems to have shifted back to that from 2008 or 2014 – white Catholics who attend more are more Republican. The trend line for non-white Catholics is hard to ascertain because of a much smaller sample size, but it probably resembles earlier trends.

The above graph is a heatmap that displaying job approval for President Trump broken down by attendance. Note that this graph is Catholics of all races together, as there were only ~100 non-white Catholics in the sample. It’s clear that the most devout Catholics are the most supportive of Donald Trump with over three quarters of this group approving of Trump’s job performance. However, when stepping back to just those who attend weekly there is a significant drop in support (down to just 55.8%). This dramatic drop in support is unusual compared to the results from white evangelicals, where 77.6% still supported Trump at this level. Trump’s approval among monthly attenders is about 50% among those who attend monthly and yearly, but goes underwater among the seldom and never attenders. While only 50.7% of the never attending Catholics approve of Trump, that number is not far removed from the 52.4% of white evangelicals who never attend.

So, are Catholics Republicans or are they Democrats? It would appear that the most devout seem strongly supportive of Trump, however those non-white Catholics are consistently more likely to identify with the Democratic party. The graph above displays the favorability of ten different groups or people. The two reference categories included are the entire survey sample (blue) and those who identify as political independents (green). The calculated means are represented by dots with 84% confidence intervals indicated by capped lines (comparing any two 84% CIs is the equivalent of a 95% t-test). On some issues, Catholics look like Americans. For instance, on labor unions, the Democratic Party, and even Black Lives Matter, Catholics look like Americans more generally. However, there are several instances where Catholics are more conservative than the United States, writ large. For instance, they are about half a point more approving of Donald Trump, the Republican Party, and Mitch McConnell than the entire sample. The clear impression here is that the Catholic vote, as a whole, could be considered center right of the American public. 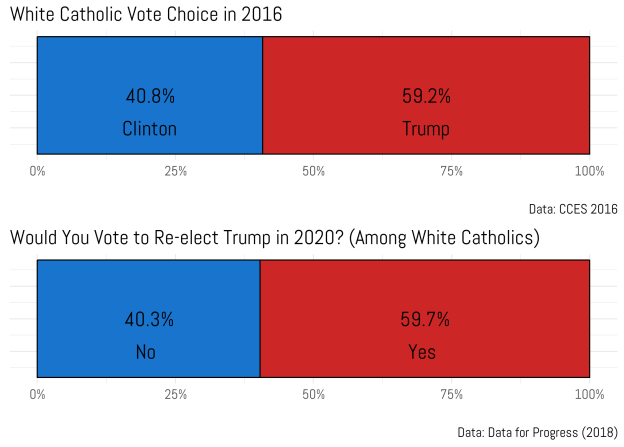 How will Catholics approach the ballot box in 2020, then? I thought it was instructive to look at a question from the 2018 Data for Progress survey which asked: “Regardless of how you voted in 2016, with the information you have now, would you vote to re-elect Donald Trump in 2020?” The options included were: yes, no, and not sure. I excluded the “not sure” option as only 3% of respondents chose it. The top two bars compare white Catholic voting behavior in 2016 and their prospective vote choice in 2020. The only way to think about these results is that there is very little regret in the hearts of Catholics regarding the election of Trump. While three in five white Catholics voted for Trump in 2016, the same share said that they would vote for him in 2020. What about non-white Catholics? Clinton captured nearly three quarters of their vote in 2016, however support seems to have eroded a bit by 2018. Now just over two thirds of non-white Catholics said that they would not vote for Donald Trump in 2020. Obviously the sample size is small (~100 respondents), but the clear impression here is that Catholics as a whole are not experiencing any sort of Trump regret.

About a year ago I wrote a post entitled, “Catholics Look Like America and America Looks Like Catholics.” The results there show that Catholic partisanship very closely mirrors the partisanship of the United States in general. The same close relationship was also found to be true when looking at church attendance and views on gay marriage and abortion. If I continue to hold to that position, then I must say that Democrats are going to have a tough time in 2020 trying to unseat the incumbent president. There is no major Trump backlash to be found in this data. Many Catholics seem to feel warmly toward the GOP and its leader in the White House. If Democrats think that they can make major gains in places like rural Wisconsin and Pennsylvania (places with significant pockets of white working class Catholics), this data should give them some serious pause.