The Inverted Golden Rule: Are Atheists as Intolerant as Evangelicals Think They Are?

[Note: This appeared today on the Monkey Cage blog without the graphs]

As the House has moved through the impeachment of President Trump, voices on the extreme right have been arguing that it’s the first shot in a coming “civil war.” According to conservative evangelical conspiracy theorist Rick Wiles, “The Democrats are forcing me to stockpile ammunition, food, water, and medical supplies to defend my family, home, and church.” In a speech before the Values Voter Summit, Trump similarly said that Democrats were coming for the rights of Christians, which he said he would resist if he stayed in office. Franklin Graham claims that “demonic forces” are pressing for the impeachment of someone that a significant proportion of evangelicals believe is God’s anointed president.

Our research found that white evangelical Protestants believe atheists and Democrats would strip away their rights.

Political scientist Ryan Burge and I ran a non-probability sample survey from May 17-18 of 1,010 U.S. Protestants, conducted online through Qualtrics Panels and weighted to resemble the diversity of Protestants in the country. White evangelical Protestants made up 60 percent of our sample.

Of those white evangelical Protestants, we found that 60 percent believed that atheists would not allow them First Amendment rights and liberties. More specifically, we asked whether they believed atheists would prevent them from being able to “hold rallies, teach, speak freely, and run for public office.” Similarly, 58 percent believed “Democrats in Congress” would not allow them to exercise these liberties if they were in power. By contrast, 23 percent think “Republicans in Congress” would not respect their rights; those were primarily the views of a small contingent of white evangelical Democrats in the sample.

These are extraordinary proportions for a core question in democratic societies: Are citizens willing to extend rights to groups they dislike? If not, the political process can no longer fairly resolve disputes and the nation may turn to violence — just as far-right commentators and public officials are predicting.

But that’s not true

Would Democrats and atheists strip away conservative Christians’ rights and liberties if they could? To find out, I turned to survey data I gathered with political scientists Amanda Friesen and Anand Sokhey from September 20-26, 2016, conducted with a large national sample of 2,517 Americans online through Qualtrics Panels and weighted to resemble the national adult population. This survey asked respondents about their feelings toward various groups and whether they would extend civil liberties to those groups. 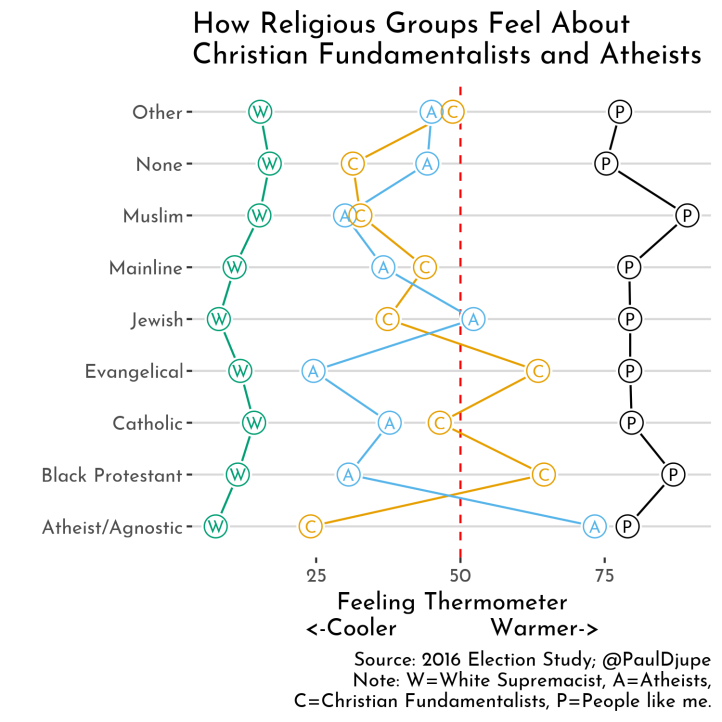 The same survey respondents were asked to choose the group they “liked the least” from a list that included atheists, Christian fundamentalists, immigrants, white supremacists, Muslims, Trump supporters, Hillary Clinton supporters and homosexuals. Almost a majority of the sample (49 percent) chose white supremacists as their least-liked group. Just 5 percent chose Christian fundamentalists; that included only 5 percent of Democrats and 10 percent of atheists.

Then respondents were asked whether their selected group should be allowed to give speeches in the community, teach in public schools, run for public office and other liberties. Americans are not particularly tolerant of groups they dislike. Only 30 percent are willing to allow their disliked group three or more such activities.

But 65 percent of atheists and 53 percent of Democrats who listed Christian fundamentalists as their least-liked group are willing to allow them to engage in three or more of these activities. That’s a much higher proportion with tolerance than the sample overall.

Someone could argue that only the most politically active atheists would be intolerant. But the proportion who were tolerant didn’t vary by whether atheists said they engaged in more or less political activity.

But evangelical Christians would strip away atheists’ rights

However, we found that a smaller proportion of white evangelicals would behave with tolerance toward atheists than the proportion of atheists who would behave with tolerance toward them. Thirteen percent of white evangelical Protestants selected atheists as their least-liked group. Of those, 32 percent are willing to extend three or more of these rights to atheists. In fact, when we looked at all religious groups, atheists and agnostics were the most likely to extend rights to the groups they least liked.

Conservative Christians believe their rights are in peril partly because that’s what they’re hearing, quite explicitly, from conservative media, religious elites, partisan commentators and some politicians, including the president. The survey evidence suggests another reason, too. Their fear comes from an inverted golden rule: Expect from others what you would do unto them. White evangelical Protestants express low levels of tolerance for atheists, which leads them to expect intolerance from atheists in return. That perception surely bolsters their support for Trump. They believe their freedom depends on keeping Trump and his party in power.

Leave a Reply to What does Christian Nationalist democracy look like? – Religion in Public Cancel reply