The danger signs for democracy have been flashing brightly since the 2016 presidential nomination process. Bernie was decrying the selection process as “rigged” and eventually Trump joined the chorus in February after the Iowa caucuses, but especially August and October with his own predictions that the general election would be fixed – what Alex Wagner called “Scare the Vote.” But he also gave voice to all sorts of anti-democratic notions. He called for his opponent Hillary Clinton to be jailed, suggested in Iowa on January 23, 2016 that “I could stand in the middle of Fifth Avenue and shoot somebody and I wouldn’t lose voters.” He called for violence against protestors on multiple occasions. While these are all deeply problematic, arguably the most dangerous was his drive to undermine the results of the coming election itself. In one critical comment, he suggested, “I will totally accept the results of this great and historic presidential election—if I win.” Democratic legitimacy hinges on accepting the results of elections as fair regardless of which way they swing. By claiming that “I’m afraid the election’s going to be rigged,” Trump appeared to be attempting to derail not just his electoral opponent, but the electoral process itself.

Was this belief widespread? Did it resonate with his supporters? And, given what we focus on at RIP, are there religious dispositions that help these notions resonate? I’m turning to a survey I ran with The Brian Calfano in the week before the 2016 election, using Qualtrics Panels to recruit almost 1,100 white Christians – 31 percent Catholic, 39 percent evangelical, and 30 percent mainline. This means the sample overrepresented mainliners, which is why I’ll present results separately for these groups or at least statistically control for the differences.

Late in the survey, we asked a question inspired by Trump’s quip, “If the candidate you support LOSES, which of the following two statements comes closer to your view: (1) The other candidate won fair and square and deserves the support of all Americans; or (2) Corruption cost your candidate the election and the new president shouldn’t be seen as legitimately elected.” I’ll refer to this below as “presidential illegitimacy.”

The view that the winning candidate is illegitimate if it’s not yours is widespread, especially among Trump supporters. The following figure shows that a majority of white Christian Trump voters and almost two-thirds of white Protestants, view the electoral process with deep suspicion. They were ready to disavow the election results if they went to Clinton. At the same time, this view is not entirely uncommon among Clinton voters – about a third of the sample indicated that a Trump win should be seen as illegitimate. (Of course they were being told that Clinton was highly likely to win at the time, so the factual frame is a bit different for them.)

My focus in this post is on religion, but I want to make clear that, for the most part, I do not see religious organizations and elites as the originating source of these views. I do believe that they amplified them in some cases, but the story I am pursuing is that religious dispositions were active in promoting adoption of these arguments about presidential illegitimacy as presented by Donald Trump and right wing media.[1]

The figure below shows the results from a well-specified statistical model, estimating the effect of each religious variable on presidential illegitimacy views. If the effect (the dot) is on the right side of 0, it means that more of that variable increases illegitimacy; if the line extending from the dot does not overlap with 0, then it suggests we can have confidence that there is an effect (it’s not zero). I included vote choice in the graph so we can compare the effect sizes.

Some of the stalwarts of religion and politics analysis do not factor into this picture – evangelical and mainline Protestants are no different than Catholics once we account for other differences between them. Likewise, church attendance and biblical inerrancy hold no sway either. We have to look elsewhere.

Instead, the results engage some critical arguments about how religion connects with politics: both in terms of exposure to political information as well as worldviews that shape what arguments people adopt. I’ve been making the argument for awhile now that “evangelicals were on their own in the 2016 election” (Chapter 1 in The Evangelical Crackup?). That is, evangelicals were not getting enough information from their clergy and others to make a decision with discernment. Moreover, when clergy did engage Trump, they were supportive, surely because those who had qualms about Trump were afraid of the consequences of raising their issues. 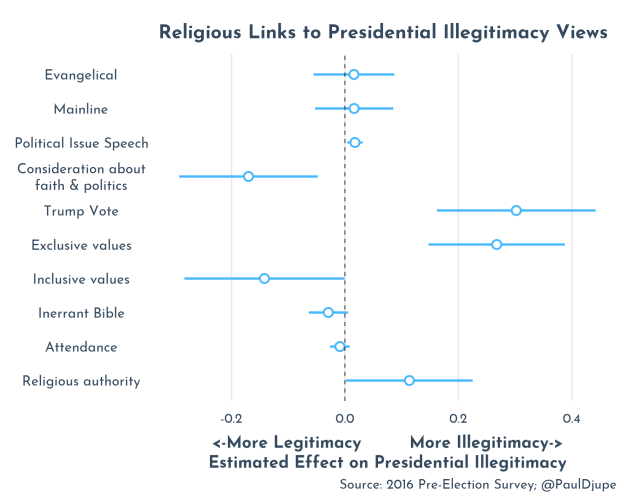 Here, we see evidence supporting both. Those who agreed that “My clergyperson gives me opportunities to consider how my faith relates to my politics” were less likely to back presidential illegitimacy (by just under 20%). This sort of critical thinking is essential for a vibrant civil society that does not succumb to partisan polarization. At the same time, those who relayed hearing more political issues addressed by their clergy had higher rates of presidential illegitimacy (each issue increased illegitimacy views by 2%). In part this is a function of the white Christian market for expression just before the election – clergy seen as favoring Trump were heard addressing more political issues (the full range of Trump support from 0 to 100 increases reported clergy political speech by 2 issues). This is to say that churches were not hosting ideal democratic deliberation in the run up to the election.

The results also engage an argument shared by many in the last several years – beliefs that insulate believers make them susceptible to adopt extreme views shared within the group. That is, holding more exclusive values (paper), which promote consorting only among fellow believers, drastically increases the odds of presidential illegitimacy (by about the same amount as being a Trump voter). On the flip side, holding more inclusive values, which encourage reaching out and interacting with diverse others, reduces that likelihood. Perhaps it is no surprise that elevating social exclusion to a religious principle would encourage adopting extreme in-group rhetoric and viewing with skepticism a process in which your team might lose. That interpretation gains steam when we see that stronger religious authority views boost presidential illegitimacy as well. Religious authority, as measured, rejects the value of doubt, diversity, and self-determination. The one truth of the 2016 election was the election of Trump according to a majority of his white Christian supporters.

This sort of outlook should entail greater resistance to new information, like motivated reasoning on steroids. The survey came late in the game, but was in the field a few weeks after the release of the Access Hollywood tape recording Trump boasting of his serial ill treatment of women. We reminded survey takers of this revelation and asked if knowing about it made them more or less likely to support him or if it would have no effect. Those responses are graphed below for Trump supporters by religious group and their stance on presidential illegitimacy. Most people’s minds were made up by this point, so the differences are not large, but they are consistent. Those backing illegitimacy were less likely to say that Trump’s groping would affect their support, and significantly more actually claimed it would increase their support for Trump. 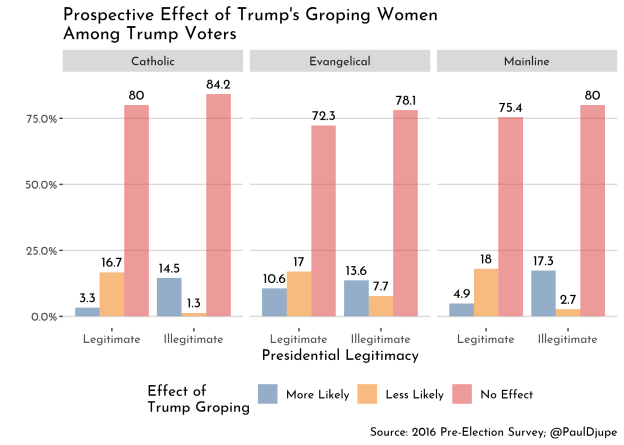 For centuries, one of the United States’ great exports was its electoral system. A stable electoral democracy marked by peaceful transitions of power was a beacon to the world. All is not yet lost, of course, but it is shocking how easily trumped up rhetoric about electoral corruption can shift the views of the electorate against a national treasure.

It’s instructive to use this evidence to look back at the origins of our current situation, where court evangelicals justify every word and deed of the president, and white evangelicals almost unanimously oppose impeachment (according to PRRI), support Trump administration policies, and believe that if Democrats and atheists gained power they would strip them of their First Amendment liberties. A cornerstone of that infrastructure is that any other outcome was illegitimate from the start. Supported by an overwhelming majority of white Christian Trump voters, this view was reinforced by components of a religious worldview that built cognitive barriers with outgroups, amplified threats, focused attention on ingroup information sources, and undercut the value of doubt. These elements are more common among evangelicals, but are not by any means exclusive to them. I do not mean to suggest that these religious worldviews are fixed, but this arrangement of mutual support from religious, political, and media sources will make alternate futures considerably more difficult to generate.

1. To show you that I ‘considered the source,’ the figure below shows how presidential illegitimacy views differ by the diversity of the news sources respondents engaged. For the most part, the larger the number of media types used (networks, news websites, cable news, talk radio, public radio, etc.), the less likely were they to think the winner would be illegitimate if not theirs. The effect is not strong among either candidate’s supporters and Trump voters show a much higher set point. The clear outliers from this pattern are the high media involved Clinton voters, who were bombarded with Nate Silver’s predictions that Clinton was safely in the lead. 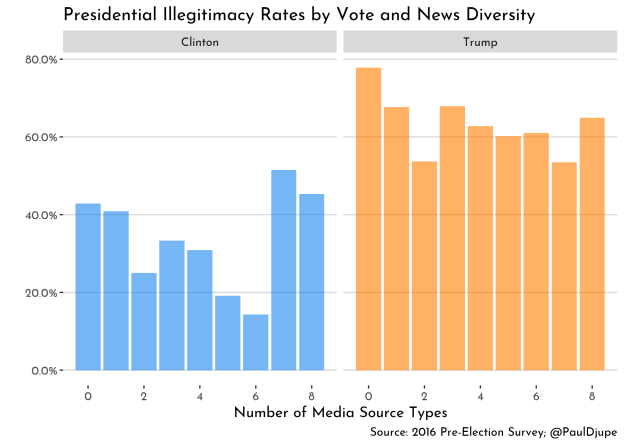